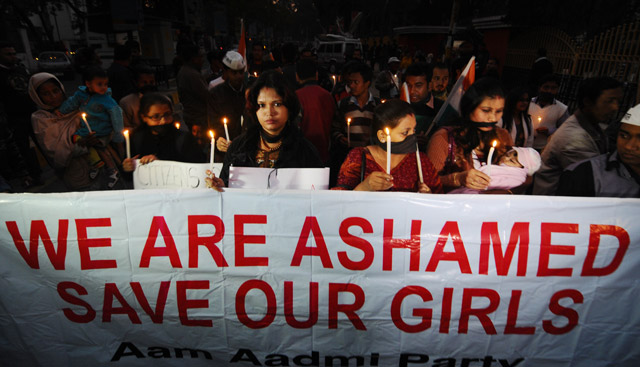 Indian protestors march behind a banner as they take part in a candlelight procession in Guwahati on December 29, 2012, after the death of a gang rape victim from the Indian capital New Delhi. (STRDEL/AFP/Getty Images)

My first sense as a young girl of sexual menace came from my Indian grandfather. Let me be clear: He never even remotely sexually threatened or molested me. But he made sure I knew that the world in which I, a girl, was growing up was innately perilous to women.

Screaming reproaches at my dress or my uppity talk, he made it clear that the only way to protect myself from the ever-present danger of men was by conducting and dressing myself with impeccable modesty, by making myself as invisible as possible. He also made me understand that, in the way of a wolf pup, my survival in the world of the alpha male depended on avoiding eye contact or any other sign of a pretense to equal status.

My grandfather was a conservative patriarch who ruled over a household overflowing with women and children: My grandmother, my two then unmarried aunts, my uncle’s wife and their three children. Every one of these individuals literally jumped at his command, fearful of his quick and unpredictable temper. The fear he wanted me to feel — the best way he knew to protect my vulnerable young female self — was confused in my mind with the fear I felt of him, his temper, and his unchallengeable authority.

Arriving in Mumbai at age 9 from California, I was innocent of the traditional joint-family protocol that reigned in my grandfather’s house. I remember being profoundly perplexed and faintly amused by the daily ballet that occurred between my grandfather and my aunt. A daughter-in-law who had come to live with her husband in the home where he lived with his parents, she was never to be in the same room as my grandfather. If my grandfather began moving out of his back room or arrived after his daily walk at the front door, someone in the family would hiss her a warning: “He’s coming!” She would quickly cover her head with her sari and slither away as fast as she could. When there was some rare need for her to communicate with my grandfather, she would ask one of her sons who would ask my grandfather.

I understood from this a horrible revelation: My grandfather's obeisance to a rigidly traditional non-relationship between father-in-law and daughter-in-law came from a fear that familiarity would open the door to sexual attraction, or worse. This fear was not unfounded: India’s National Crime Records Bureau (NCRB) data for 2011 indicates 94.2 percent of rapists are known to their victim. My aunt’s invisibility and the modest dress and comportment I was supposed to adopt were designed to protect our virtue. In effect, we women were to maintain a kind of purdah. The word, of Persian origin, means “curtain” and defines a state where women are concealed from the view of men. A woman exposed to male view was a woman, I learned, in danger.

It is clear in the wake of the brutal gang rape of a young paramedical student in Delhi on December 16 that a purdah mentality still dogs Indian society. A woman who can be seen is seen as a woman available for violation. Rapid modernization and urbanization in India have made women, especially young women, visible as never before. More and more women are seeking education and employment. They go out to school, to work and to socialize with friends. They, like the young woman who was gang raped in Delhi, go out to movies. Increasingly, they go out with men, and, increasingly, they, instead of their parents, choose their life partners.

The young woman who was attacked had come to Delhi from a small village where her enlightened parents had scrimped and saved to educate her. She was studying to become a physical therapist. She was making her own life on the new exciting terms offered by India’s changing society. While these opportunities have increased, they can’t meet the volume of raised aspirations. Competition for slots in the better schools and for jobs remains fierce. The competition for women is also fierce.

In India, girls are too often seen as temporary members of their families who will one day marry and join a new family. Male children are preferred, and sex-selective abortion, female infanticide and the sheer neglect of girls have made for a growing gender gap. Too many young men simmer with aspirations and desires that are simply not likely to be realized.

India’s purdah mentality permeates every level of Indian society, as remarks made after the gang rape by members of Delhi’s police force and political leaders make abundantly clear. Rapists and sexual assailants also know they are likely to get away with their crime: While the NCRB reported a 112 percent increase in reported rapes between 1990 and 2008, three-fourths of accused perpetrators remained in 2011 at large and only 26 percen were convicted in 2012. The vast majority of rapes and sexual assaults remain unreported: Victims fear reprisals, humiliating treatment on the part of the authorities and reputations indelibly stained.

In the wake of this brutal attack, Indian citizens have taken their outrage over their government’s failure to reform antiquated laws and a creepingly slow judicial system that abet rapists to the streets. The lid on India’s deep-seated culture of misogyny has been blown; the pretty curtain of the virtuous because modest Indian woman torn aside to reveal the hypocrisy of the country’s purdah mentality. If there is hope in grief and outrage, it is hope for real reform now of laws that fall far short of defining rape and sexual assault as crimes, but also of attitudes that blame the victim and excuse the perpetrator.

In this, Indian citizens who have demonstrated en masse in recent weeks have joined movements against government indifference and misogynistic attitudes that feed a culture of rape in even the world’s so-called advanced economies. The “slutwalk” movement was launched in Toronto, Canada in April 2011 after a policeman, sounding alarmingly like my Indian grandfather, remarked that women who dress like sluts shouldn’t be surprised if they are sexually attacked. The slutwalk march has been replicated across the United States and Europe, where rape rates remain high and convictions of rapists low.

I recently felt again the kind of fear of men I’d learned from my grandfather in Mumbai so many years ago. Coming out from a subway station in Brooklyn, New York, last month, I saw a sign taped to a nearby light pole warning women against a brutal serial rapist on the loose in the neighborhood. On the sign was a phone number women could call if they wanted a volunteer bicycle escort home. I looked around nervously, and hurried on my way, head down, hunched over a little. Don’t look at me, my body language said: I’m invisible.

Mira Kamdar is a Paris-based Senior Fellow at the World Policy Institute in New York and an Asia Society Associate Fellow.
@mirakamdar