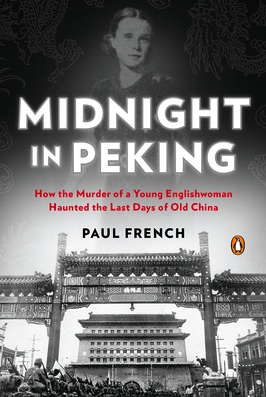 Death was not uncommon on the streets of Peking in the winter of 1937. Beggars froze on the sidewalks. Suicides occurred regularly as despair engulfed people. Competing warlords openly carried out assassinations to eliminate their rivals. Japanese soldiers and tanks roamed freely, ominous signals of carnage to come.

But even in such a context, the body discovered next to the city’s Fox Tower on the morning of January 8, 1937 stood out. Pamela Werner was not a vagrant, or a warlord — she was a 19-year-old British resident of Peking, a boarder at Tientsin Grammar School, the adopted daughter of E.T.C. Werner, a former British diplomat. And Pamela’s death was not accidental: She had suffered a severe head wound and been stabbed repeatedly before the killer had removed her heart.

Who killed Pamela? This was the question that rippled through Peking’s small but tight-knit foreign community, and it lies at the center of Paul French’s new book, Midnight in Peking: How the Murder of a Young Englishwoman Haunted the Last Days of Old China. Pamela Werner’s murder was never solved, but French, a longtime Shanghai resident and versatile author, has reopened the 75-year-old case and pieced together an impressive array of evidence to offer an explanation of why and how the crime occurred.

By 1937, Peking had become “a relic,” French writes, “a one-time capital that was now far too close to the Japanese war machine.” The city’s Legation Quarter was emptying quickly as well-heeled residents sent their families home to Europe and the United States. Those who remained represented a mix of diplomats unable to depart until their governments recalled them, and stubborn Old China Hands with no intention of fleeing their adopted homeland.

The Werners did not quite belong to either group: E.T.C. had a reputation for being odd, often leaving his daughter alone in Peking while he traveled to Mongolia on research expeditions, and he had a shadowy past, marked by dismissal from the British diplomatic corps and the mysterious death of his much younger wife when Pamela was five years old. Independent and rebellious (though French does not exactly spell out what form this rebelliousness took), Pamela had been expelled from a number of Peking’s private schools and finally sent off to board in Tianjin. Father and daughter lived in a hutong neighborhood outside the Legation Quarter, remaining adjacent to but not part of the expat world.

Diplomats and Sinophiles were not the only foreigners in Peking, however much they might have preferred to ignore the presence of the city’s other expatriate community. This group encompassed a hodgepodge of penniless White Russians, Japanese and Korean drug smugglers, and an array of chameleon-like figures who discarded names and nationalities whenever the law got too close and they needed a fresh start. Peking’s underworld occupied the “Badlands,” a neighborhood to the east of the Legation Quarter.

Pamela Werner’s death, French reveals, brought together these two worlds. Yet many at the time refused to see the connection, initially suggesting that her savage murder had been the work of a random Chinese vagrant or even one of the “fox spirits” rumored to haunt the tower. The facts soon undermined the vagrant theory: An expensive platinum-and-diamond watch remained on Pamela’s wrist when her body was found, and an autopsy revealed that she had been killed elsewhere and her body dumped at the Fox Tower. The dismemberment of her corpse, a process that could have taken hours, also indicated that her murder had not come about by happenstance. Pamela had known her killer, and her death had been motivated by something other than robbery.

But what that motive was, and who perpetrated the crime, eluded the detectives investigating Pamela’s murder. Colonel Han of the Peking Bureau of Public Safety and Detective Chief Inspector Richard Dennis, brought over from Tianjin’s British Concession to observe the investigation, quickly ran up against a number of impediments. The forensic science of the day could only tell them so much about the events leading up to Pamela’s death. Witnesses disappeared or refused to talk. The British consul ordered Dennis to confine his investigation to the Legation Quarter, despite the fact that Pamela’s body had been found outside the district. And eventually, as China slipped into war with Japan later that year, Pamela Werner’s murder slipped into obscurity. Though her death had shocked Peking and made headlines around the world, it eventually became overshadowed by the violence to come. “Peking,” French comments, “was obsessed with its own survival.” Everything else took a backseat.

For one person, however, solving Pamela’s murder never became any less important. That person was her father, E.T.C., and it is his own investigation of the case that has enabled French to assemble a logical and compelling answer to the question of who killed Pamela Werner. French explains in a note at the end that while researching his book he came across over 150 pages of E.T.C.’s correspondence, in which he detailed the results of his inquiries and the leads his own private detectives pursued after the police closed their official investigation without resolution. French then followed E.T.C.’s paper trail and came to agree with his explanation for Pamela’s death.

French reconstructs these events with sympathy and style as he elegantly recreates the world of Old Peking and explains the significance of Pamela’s death for the community around her. And while her murder may officially remain unsolved, Midnight in Peking more than satisfies French’s desire that “some sort of justice, however belated, be awarded her.”

The story originally appeared in The China Beat.