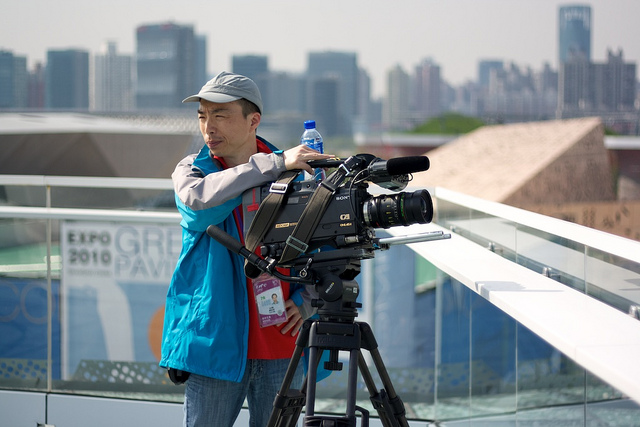 A camera operator from CCTV News on the roof of the Swedish pavilion at the 2010 World Expo in Shanghai. (Flickr/Tobias Andersson Åkerblom)

In author Ying Zhu’s new book, Two Billion Eyes: The Story of China Central Television, the Chinese media expert takes an unprecedented look inside CCTV, a state-controlled network that reaches the world's single largest audience with over 1.2 billion viewers globally. Zhu is a professor of media culture at the City University of New York, College of Staten Island, and author and editor of seven other books, including Television in Post-Reform China and Chinese Cinema During the Era of Reform.

In 1988, a six-part documentary series, River Elegy (also translated as The River Dies Young), shown on China Central Television, delivered a poignant and pointed message about how agricultural-based and inward-looking China came to be defeated by maritime and ocean based civilizations. For China to succeed the documentary elaborates, it had to replace its regressive civilization with a more open and adventurous ocean culture like that found in the West. Deemed as having fanned the democracy fever among young people and therefore fomenting the 1989 student movement, the director Xia Jun was forced into an involuntary career hiatus. Xia was eventually rehabilitated and returned to CCTV in 1996 as a producer at News Probe, where he worked for four years before moving on to take over Beijing TV’s entertainment channel.

I sat down with Xia at the conference room of his company, Chinese Culture Group, which takes up a section of the fifteenth floor of the Jinyu Plaza Office Building in Beijing’s Haidian District. Xia looks a little pale, with a soft and slightly round physique, like many desk-bound affluent Chinese men I met whose daily routine involves more banqueting than exercising.

Like many others, Xia graduated from the Beijing Broadcasting Institute, majoring in TV news. A humanities scholar in his heart, he stayed on to enter BBI’s first graduate class, majoring in history of modern Chinese literature. He joined CCTV in 1986, becoming the network’s first employee with a graduate degree. 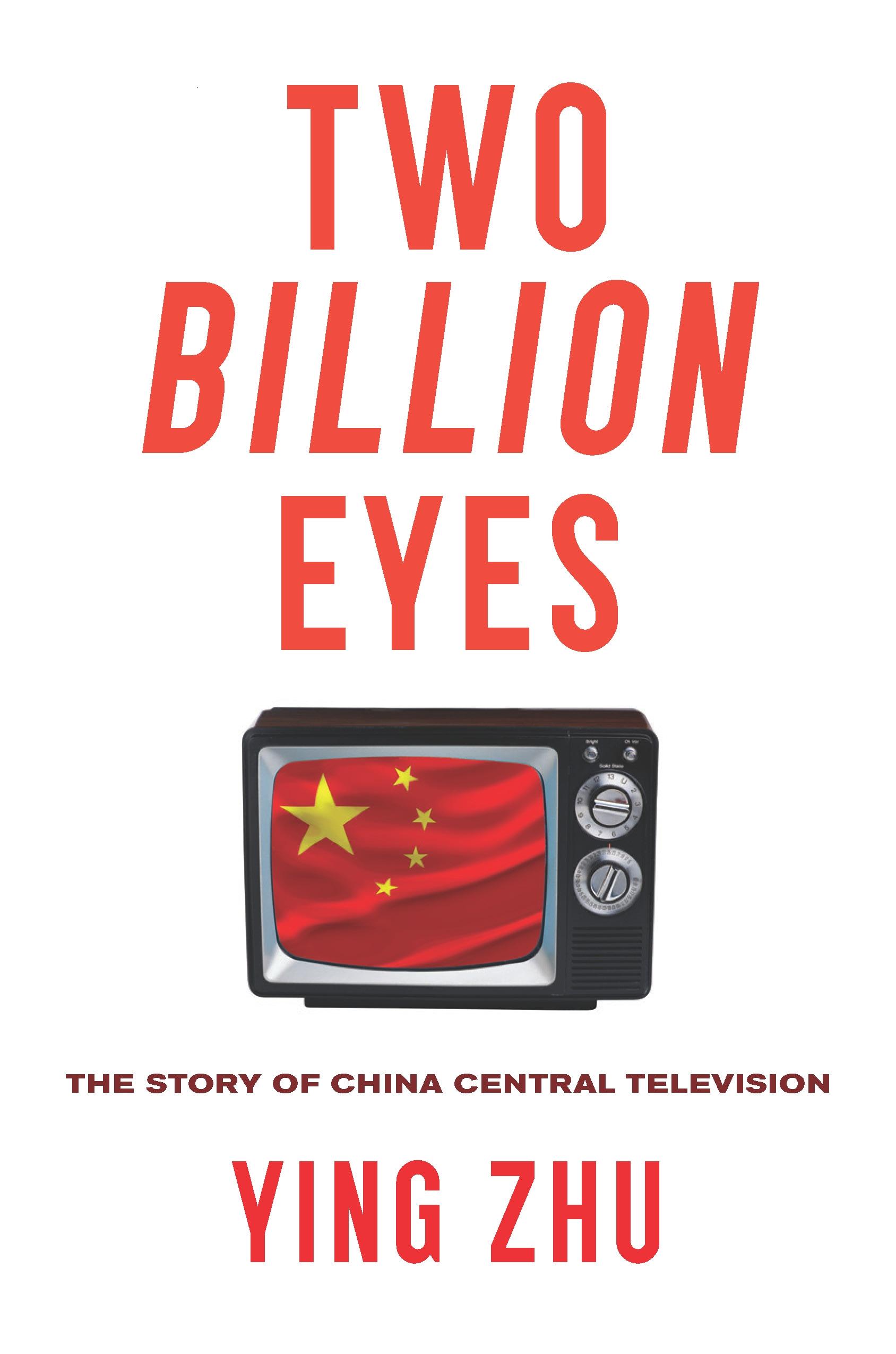 Upon arrival at CCTV, he participated in making Great Yellow River, a thirty-episode National Geographic–style documentary jointly produced by CCTV and NHK (the Japanese TV network) that celebrated the Yellow River as the origin of Chinese civilization. During the course of making the documentary, Xia was jolted by the naked poverty surrounding the crisis-ridden Yellow River. Xia grew frustrated with what he saw as the series’ unmitigated celebration of the magnificence of the Yellow River as the cradle of Chinese civilization. Inspired by pioneering films such as Chen Kaige’s Yellow Earth and cultural modernization movements, Xia gathered a group of like-minded young intellectuals from China’s literary circle with the hopes of injecting serious cultural musing into CCTV programming. The result was the ground-shaking River Elegy, the first widely viewed Chinese documentary with hostile attitudes toward traditional Chinese culture and the legacy of the CCP. River Elegy became an overnight sensation, stirring heated debate among Chinese intellectuals, the party leadership, and the overseas Chinese community.

The River fever came to an abrupt halt as the 1989 student uprising implicated the reform-minded Zhao Ziyang, dragging down the entire reform camp. River was accused of instigating the student movement, and an intense media campaign was launched to discredit the series. CCTV broadcast a self-criticism meeting on the evening news, denouncing River as bourgeois propaganda.

With the documentary repudiated, its creators, many of them having openly endorsed the democratic movement, were purged, detained, or forced into exile. Xia was promptly stripped of major responsibilities at CCTV. Instead of leaving China like many of his collaborators, he underwent a self-imposed exile, spending the next five years roaming around China’s poverty-ridden rural areas.

Reflecting upon his unexpected early fame and career at CCTV, Xia said simply, “It is fate. I had my five minutes of fame because I was at the right place at the right time. The moment passed, and that’s that. It was during the optimum period when the society was allowed to open up, and media, which was influenced by the cultural fever at the time, was receptive to this type of programming. The freedom was there for the program to appear on Chinese television. It all ended after June fourth.”

Xia continued, with a jaded smile on his face, “Obviously I was completely marginalized at CCTV after that, but luckily my skill and expertise were valued by other organizations so I became a floating independent producer. From 1990 to 1995, I spent five years wandering around China’s rural areas, exploring topics of my own choice. I made a documentary about China’s peasants in 1992 and then another six-part, two-hundred-minute one called East, which is an anatomy of ancient civilization in Asia. The documentary was never released.”

“Many things had changed during my five years in exile. I returned to a different CCTV, now housing celebrated shows such as Oriental Horizon and Focus. Reform and opening up had brought changes to CCTV. And I was a changed person as well. When I made River at twenty-six, I knew little about the real world. I did not have a real in-depth understanding of the many issues facing China. My years wandering around China’s countryside transformed me. I experienced the real China and realized that there was a gap between my abstract notion of Chinese tradition and how the tradition is lived through real Chinese people.”

He would work at CCTV for four years before leaving for Beijing TV.

“China is at a very awkward stage,” said Xia. “I don’t think intellectuals fully comprehend the level of China’s dilemma. Urbanization and industrialization have unleashed a hard-to-tame desire for a more materialistically enriched life, resulting in vast disruption to life’s natural balance and equilibrium.”

It is interesting to see how Xia has moved from the position of a radical Occidentalist to someone with a self-professed understanding of the logic of China’s agrarian-based civilization.

Xia left CCTV in 2000 to experiment with running a lifestyle channel leased from Beijing TV as a private contractor, an opportunity that gave him the freedom to run his own media entity. He emphasized that his freedom was worth the price of losing CCTV as a major platform. He reminded me that his former CCTV colleagues have little moral or professional control working for CCTV.

When I relayed this to Chen Xiaoqing, CCTV’s director of documentary programs, there was a touch of sarcasm in his response: “I hope so, though probably not. I feel that the old Xia’s spirit has actually been straitjacketed today. His trademark sharpness and precision are all gone now. He caters more than he had to before. You have to cater [to sponsors] if you want to do projects. There is no way out. The difference is that instead of serving the party-state, you’re now at the mercy of money. Perhaps we all need to find places that are right for us as individuals.”

Perhaps this was an overly harsh assessment of Xia’s recent career move, but like Xia, Chen is not someone who minces words. Chen is a man in his mid 40s, a decade younger than most other middle managers at his level. In 1989, after completing his master’s degree, Chen joined CCTV’s Local 30 Minutes, a curated program that showcased local documentary productions or productions about local events. In 1991, he was sent to report on flood-control efforts in southern China. There he shot The Story of a Lonely Island on location. The film became China’s official documentary entry at that year’s Cannes TV Festival. Encouraged by the success, Chen started to toy with the idea of making an independent documentary about migrant workers from his hometown who worked as nannies in big cities.

The film, A Faraway Home in Beijing came out in 1993, bringing both fame and financial backing for Chen’s work. His next project, The Dragon’s Back, about rural school dropouts, came out in 1995 to more critical acclaim. Chen suffered bouts of depression while he was making Dragon. He was clinically depressed for a year and half, losing his sense of purpose and questioning why he would want to continue working for CCTV. He seemed to have come out the other side of depression with a firm grasp of the limitations and imperfections of contemporary Chinese media, and the implications of those conditions for his own life as a media professional. Resigned but not jaundiced, he is among the most thoughtful and clear-eyed people I talked to.

Though Chen hinted in our early correspondence that he’d rather not discuss his depression, by the time our appointment arrived, I could hardly fail to address the issue, since it had already become apparent from background research and in previous interviews that CCTV is full of serious-minded creators who regularly experience bouts of self-doubt, philosophical ambivalence, and in some cases, like Chen’s and Cui Yongyuan’s, clinical depression. Certain common themes, about ideals distorted or altogether thwarted by commercial and political pressure, were also emerging. I broached the subject with Chen with an open-ended question: “Are you happy where you are?”

“Doesn’t matter. Work is work.” He shrugged. “I’m the employee, so my loyalty lies with my employer.” With a palpable disenchantment in his tone, he continued, “Prior to 1999, I thought I was part of the collective ownership of the network and worked hard to make the network better.”

CCTV’s accelerated commercialization since 1999 troubled Chen. “National TV should represent the nation, not the moneyed interests. Now it all depends on who can sell more products and cater to more viewers. You’re rewarded based on the amount you sell and bring.”

Are there many others who share these feelings about the state of Chinese television?

“Certainly,” Chen said. “Mine are hardly radical. Many have written articles and spoken to journalists about this. I don’t usually do that.”

Perhaps the then incoming new president would protect quality programs from the ratings war?

“It all depends on whose criteria we are talking about, quality-wise,” Chen said. “Quality according to the state machine, the general public, or the social ideals of intellectual circles?” he asked. “They are not equivalent.”

Chen regards his documentary program as a kind of gateway toward high-culture television in China, the most nimble vehicle for ideas and information that would otherwise scrape against too many political and commercial barriers to make it to the air. In every other type of programming, he complained, the road is already laid out for you, especially the news. “No need for you to look for news, because news outside the boundaries does not exist. ... You say whatever you are told to say.”

I asked if the program he produced was in sync with his ideas about programming and life in general. Chen answered for his generation rather than himself. “I think that our generation was brought up to love what we do and that what we do becomes part of who we are.” This appeared to be partly a dig at the latest generation of post-Tiananmen, post-socialist Chinese, who are less inclined to selfless service in the collective interest of the broader society. It may also have been partly an expression of generational regret and a rationalization of personal professional resignation. Certainly, Chen was not the only person at CCTV who downplayed his foiled ambitions.

Copyright © 2012 by Ying Zhu. This excerpt is from Two Billion Eyes: The Story of China Central Television, to be published by The New Press. Reprinted here with permission.