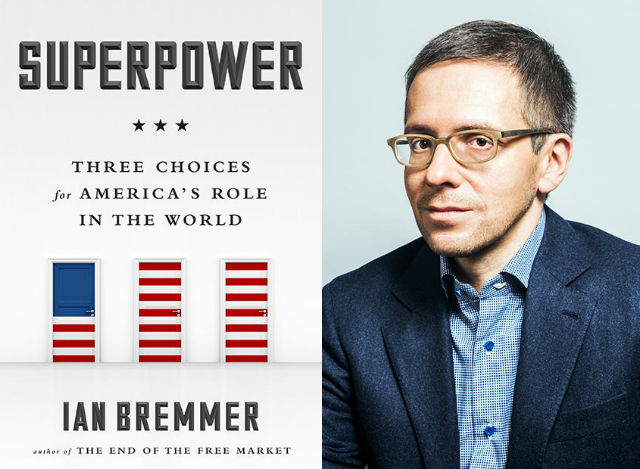 Bestselling author and global policy expert Ian Bremmer is the president and founder of Eurasia Group, a leading global political risk research and consulting firm. In his new book Superpower: Three Choices for America's Role in the World, he considers the rise of Asia and how it impacts the evolving global role of the United States.

Bremmer will appear at Asia Society New York on Wednesday, May 27 following the launch of his new book. Joining him on stage will be Asia Society Policy Institute President and former Australian Prime Minister Kevin Rudd for a discussion on the outlook for the United States and its partners and rivals in Asia and around the world. (For those who can't be there in person, the program will also be a free live webcast at AsiaSociety.org/Live at 12:00 pm New York time on May 27).

We're pleased to present an excerpt from Bremmer’s new book.

America will remain the world’s only superpower for the foreseeable future. But what sort of superpower should it be? What role should America play in the world? What role do you want America to play?

Some say the time has come for the United States to mind its own business, let other countries solve their own problems, and focus instead on rebuilding America’s strength from within. Others insist that Washington can and should pursue an ambitious foreign policy, but one designed solely to make America more secure and more prosperous, not to foist our political and economic values on others.

Still others say the world needs leadership and that only America can provide it. They argue that Americans and everyone else will be better off if democracy, freedom of speech, access to information, and the rights of the individual are universally respected. But this book is about what you think. Whether you’re an American or the proud citizen of another country, I want to know what role you believe the world’s only superpower should play in our world. If you finish the book with a strong opinion, especially if it’s a bit different than the one you have at this moment, and even if it’s the opposite of mine, this book will have served its purpose.

I’m proud to be a political scientist, one who takes seriously his responsibility to offer unbiased analysis. I’m also intensely proud to be an American. You should know that right at the top. Among my ancestors are men and women from Armenia, Italy, Syria, Germany, and the Native American tribes that made their way across Central Asia, the Bering Strait, and the great North American plains. I grew up in the projects of Chelsea, Massachusetts, where I felt completely at home on my mainly Puerto Rican Little League baseball team, in my heavily Italian high school, and among the mainly Anglo middle-class kids I knew in my Junior Achievement group. Beyond the melting pot, my patriotism is an inevitable product of my childhood. My father died when I was four. My mother raised me and my brother with little help, little money, and unshakable confidence that a good education and a lot of hard work would give me the chance to invent my own future.

Because I love my country, I feel a responsibility to honor its virtues and accomplishments and to think and write about its shortcomings. I also care very much about America’s place in the world — what it is, what it could be, and what it should be. I want my country to find the courage to help others solve problems and the wisdom to avoid creating new ones. I also love a debate. Not the ones where politicians preen and bob and weave while pundits tally up their applause lines and verbal stumbles. I love debates in which brave and sincere men and women take up serious subjects in hopes of opening new doors onto undiscovered country. That’s the kind of debate America needs right now.

Excerpted from Superpower: Three Choices for America’s Role In The World, in agreement with Portfolio, an imprint of Penguin Publishing Group, a division of Penguin Random House LLC. Copyright © Ian Bremmer, 2015.