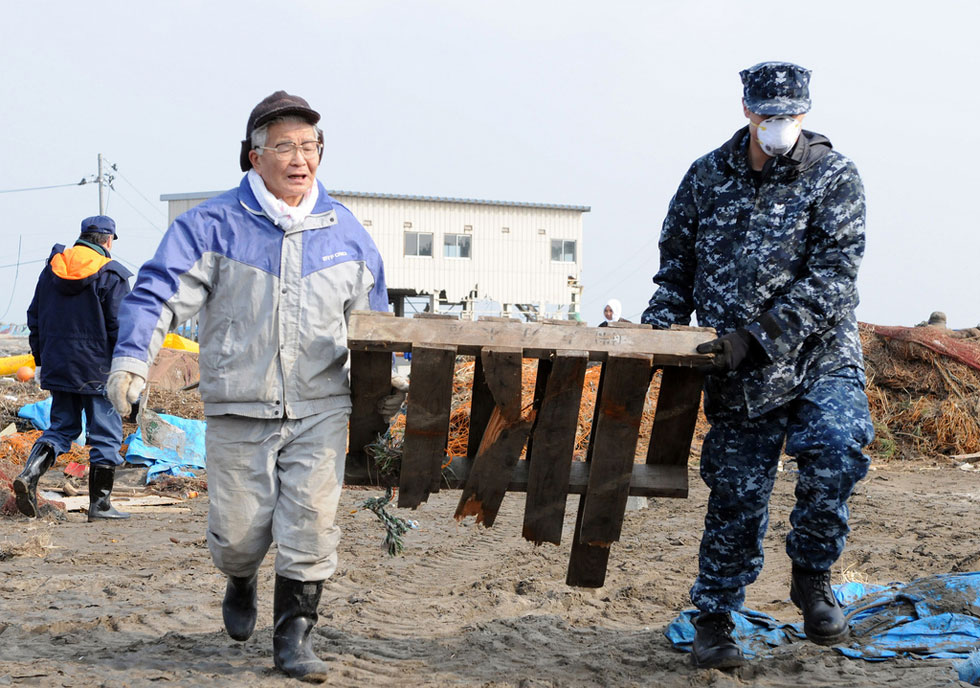 John Dicola (R) of the U.S. Navy assists in removing debris during a cleanup effort at the Misawa Fishing Port in Japan on March 14, 2011. Photo by Devon Dow. (Flickr/U.S. Pacific Fleet)

In his forthcoming book, 3.11: Disaster and Change in Japan (Cornell University Press), Japan scholar and MIT Professor Richard Samuels examines the after-effects of the March 11, 2011 tsunami and earthquake and ensuing nuclear meltdown on Japanese politics and society. In an interview with Asia Blog two weeks ago, Samuels discussed his book and the changes and continuity he witnessed in Japan over the past two years. Now, on the second anniversary of the 3.11 catastrophe, Asia Blog is pleased present an excerpt from Samuels's preface to 3.11.

Fall down seven times, get up eight.
— Edo-era aphorism

On 11 March 2011, Japan moved eight feet closer to North America, the earth's axis shifted and the world turned upside down for 128 million Japanese. Each of us watched in horror as 20,000 people were washed away by a devastating tsunami just minutes after a 9.0-magnitude earthquake shifted the sea floor off the Tohoku coast in northeastern Japan. And then, in slower motion, we witnessed the meltdown of the Fukushima Daiichi nuclear reactor, the displacement of 110,000 residents, and the spread of an invisible radioactive terror (real, even if only imagined) across the archipelago. This quake, tsunami, and meltdown — a triple catastrophe with no precedent — formally called the Great Eastern Japan Disaster (Higashi Nihon Daishinsai) soon became known simply as "3.11."

But 3.11 was hardly the first earthquake to shake Japan. The antiquarian booksellers of Jimbocho in downtown Tokyo bulge with evidence of previous disasters and how they were characterized in the popular media of their day. In one of my favorite haunts, there is a cache of several thousand photo postcards in a crate labeled simply "shinsai" (disasters). Most of them are photos of the Great Kanto Earthquake of 1923. They include views from the hills above Ueno of the flattened plain below, photos of smoldering buildings in the Ginza and Otemachi, and a powerfully symbolic image of the gate of the mighty Finance Ministry with nothing left standing behind it. Photos of citizens streaming away from the fires, of officials organizing relief supplies, of the young crown prince (later the emperor Hirohito) surveying the damage with municipal officials and military officers, and of charred corpses are all available. They provide horrifying parallels — literal and metaphorical — to the most recent crisis.

The modern bookstores nearby offer a contemporary version of much the same story. For months after 3.11, each had a "shinsai corner" just off the main entrance — often draped by banners with the ubiquitous rallying cry "Ganbaro Nippon!" (Let's hang in there together, Japan!) — filled with photo collections rushed to print by major publishing houses like Mainichi, Nikkei, and Yomiuri. In addition to magazine-style photo essays there were volumes devoted to the rescue and relief efforts of the Self-Defense Forces (SDF) and hastily produced manga (comics) depicting heroic feats by ordinary citizens. The shinsai corners were also stocked with emergency food guides, instructions on how to conserve energy, and "anywhere lights" (dokodemo raito) for emergency use.

As in the United States, where 9/11 had framed every corner of the national discourse a decade earlier, 3.11 and its consequences refocused a longstanding national debate on the future of Japan. Political entrepreneurs with ideas about where Japan should go and how it should get there now armed themselves with a new tool. Those with the most compelling account of what happened — including the most convincing villains and heroes — stood the best chance of seizing the political initiative. Long before 3.11, Japan's political discourse had been dominated by a long list of concerns, with failed leadership, uncertain security, unraveling community, and desired changes atop it. After the disaster struck, elites began to refashion their arguments, incorporating lessons from 3.11 that bolstered their particular cause. The national conversation became a rhetoric of crisis and took on greater urgency. What had been a discussion about the slow devastation wrought by debilitating demographic and economic forces now became a pressing set of demands about how to respond to sudden devastation. Language that had been dormant or discredited for decades — including references to "national crisis" (kokunan), last used a century earlier — itself became the object of debate.

Japan's elites were arguing about much more than language, of course, and were engaged in much more than a conversation. Like opinion leaders everywhere, they knew they could be empowered by control of national rhetoric, the "sweet talk" that frames public choices and enables "unforced persuasion." They would use 3.11 to shape national interests (and possibly even national identity) and try to tilt the balance of history in the direction of their own choosing. There were many choices available. For some, 3.11 was a warning for Japan to "put it in gear" and go in a new direction. Japan's national interests would be achieved only by moving forward vigorously, beyond dependence on the United States or on nuclear power. For those who had more to lose from change, the catastrophe was a once-in-a-millennium "black swan," so Japan should "stay the course." It was in Japan's interest to continue to do what it had been doing — but do it better. A change in direction would be counterproductive. Still others declared that 3.11 taught the clear lesson that Japan must return to an idealized past and rebuild what had been lost to modernity and globalization. Japan's interests could be realized only by returning to the country's basic values and rediscovering its essential identity.

For a time, 3.11 seemed like an endless national nightmare. The Japanese public became familiar with units of measure and materials — microsieverts and becquerels, cesium and strontium — that were freighted with anxiety. Nor were policymakers, soldiers, or utility executives any more comfortable with the language and components of the disaster. Over time, however, the crisis would become a part of normal politics. Some became convinced, others grew worried, and some were relieved to think that "the Tohoku problem" might recede from public memory. In separate interviews less than a year after the catastrophe, a deputy mayor of Yokohama said that opponents of change were stalling, waiting for the public to lose its fervor, and a Diet member declared that the death of twenty thousand was not enough to tip national politics one way or another. If they are right, then 3.11 will prove useless as a political tool, and all that talk will have only cheapened the human pain of the disaster. 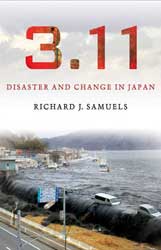 "3.11: Disaster and Change in
Japan" by Richard Samuels

It is still too early to know if 3.11 will be a punctuation mark or merely a historical parenthesis. But we do know that however complex it was, 3.11 changed few minds within Japan's chattering classes. Opinion leaders were firm in their belief that by distilling the proper lessons of 3.11 they could lead opinions more effectively than ever. So they recrafted their arguments — adding new heroes and villains, compiling new reports and analyses — to convince citizens that there are optimal ways (their preferred ways) for Japan to pick up the shards after 3.11's devastation. It is therefore no surprise that what was optimal for partisans after 3.11 was what had been optimal for them before 3.11. They apparently assumed that the preferences of the general public are always malleable. With enough persuasion and incentive — either in the searing heat of political struggle or in its absence — a largely indifferent public can be brought to support one vision or another. Generating explanations and prescriptions, nudging preferences, and realigning policy after tragedies is a core business of democratic politics everywhere. So Japan's prolonged, intense post- 3.11 engagement of government with citizens and ideas — what I call in this book its "dueling narratives" — is many things, not least evidence of a robust democracy at work. Just how the discourse works and whether the catastrophe will empower change or inertia (or neither) are my topics.

I take up these questions in three policy areas: national security, energy, and local governance. The first two choices seem self-evident. The events of 3.11 delivered to each an unprecedented reversal of fortune. A once-marginalized military found itself on center stage, achieving new levels of national esteem, while the periodically maligned military alliance with the United States performed to similar accolades. In the energy case, however, a previously confident and powerful business community became the target of sustained national opprobrium. As a result, it stood on the precipice of massive reform, one that might yet produce the most extensive sectoral realignment in postwar Japanese history. Finally, the reasons why local government deserves a privileged place in this analysis may be less obvious, but they are equally compelling, not least because the performance of local governments after 3.11 was so rich in clues about the future of Japanese public administration. Most notably, the crisis illuminated weaknesses in the central government and strengths in the regional and local ones that had been hidden from view. In addition, the post- 3.11 visions of the most affected prefectural governments — Miyagi, Iwate, and Fukushima — revealed fundamental differences about local preferences. And 3.11 has pushed the Tohoku region, with its aging population and hollowed industries, some ten years ahead of the rest of a fretful nation. So, getting Tohoku reconstruction right ought to provide clues about national reconstruction in the years ahead.

"Getting it right" in each of these three critical policy areas could mean changes in the deliberative processes through which decisions are made. Might those largely corporatist and opaque processes become more transparent, more participatory? Or could "getting it right" mean changes in the institutions themselves? Perhaps a more robust set of policy checks and balances or a reduction in jurisdictional competition is in the offing. And perhaps we will see if new policy communities are forming. Is a new command structure readying to make consequential decisions in any of these policy areas? Are there imminent shifts in the balances of power between politician and bureaucrat, soldier and statesman, business and government, center and locality? If so, were they caused by 3.11? Did 3.11 abet them in any way? Or was 3.11 just one more event on a path of irresistible change? And if nothing comes of 3.11, why was so great a catastrophe irrelevant after all the Sturm und Drang?

We expect a lot from crises — perhaps too much. The Lisbon earthquake on All Saints' Day in 1755, for example, has been credited as having inspired Enlightenment philosophy. Others believe that the 2004 Indian Ocean tsunami was a "wave of peace" that washed away a protracted and bloody civil war in Indonesia. Political analysts, and I include myself, can be particularly credulous when facing events of this magnitude. Indeed, 3.11 spawned no shortage of hyperbole in Japan and abroad. Some claimed a new era was at hand — 3.11 would be the grease beneath the skids of economic change, technological innovation, and political transformation; it was a turning point, a hinge, a rebirth; Japan would have its new deal, its escape from malaise, its renewal. A new generation of Japanese, the "3.11 Generation," would find a fresh motivation and stimulate a new national resolve. Their shared, awful experience would define a cohort for which national reconstruction is the new national anthem.