Book Excerpt: 'Discontent and Its Civilizations' by Mohsin Hamid 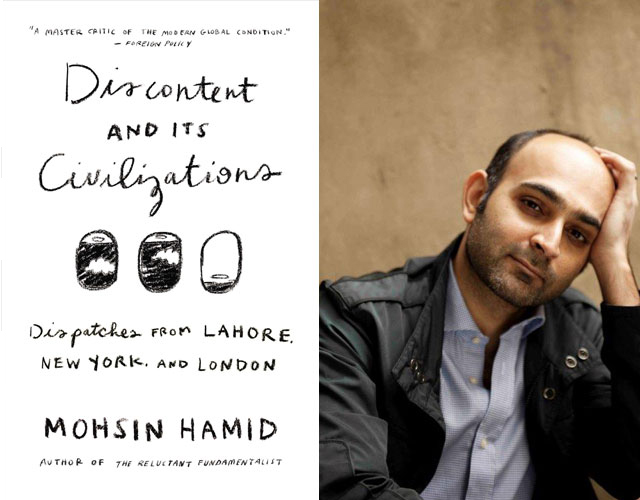 Internationally acclaimed novelist Mohsin Hamid adds a significant new credit to his publication history this month with the release of his first book of essays, Discontent and Its Civilization: Dispatches from Lahore, New York, and London (Riverhead Books). In these pieces published over the last 15 years, Hamid traces the fracture lines generated by a decade and a half of seismic change, from the "war on terror" to the struggles of individuals to maintain their integrity, as his publisher writes, "in the rigid face of ideology or the indifferent face of globalization."

Hamid appears at Asia Society New York this Monday, February 23, for the U.S. launch of the new book. Joining him on stage will be physician and writer Dr. Azra Raza, for a talk centered on Hamid's writing and his perspectives on global issues as well as on culture and life from the vantage points of Lahore, New York, and London. A book sale and signing will follow the event. (For those who can't be there in person, the program will also be a free live webcast at AsiaSociety.org/Live at 6:30 pm New York time on February 23.)

Earlier this week, Hamid checked in with Asia Blog for a quick Q & A prior to Monday's talk. Now, we're pleased to present an excerpt from his new book's title essay, “Discontent and Its Civilizations,” written in 2010.

Recently I was strolling along Amsterdam's canals with a pair of Pakistani immigrant friends. They were worried. The leader of the third-largest party in the Dutch Parliament had called for a ban on the Koran. Attitudes toward Muslims were becoming toxic. A strange thought hung over me as we wandered by marijuana-selling coffee shops and display windows for legal prostitutes: the thought that Anne Frank, as a permanent reminder of intolerance gone mad, could be a guardian angel for Muslims in Amsterdam. How sad that in this city, with its history, a religious minority could once again feel the need for such a guardian.

Suspicion of Muslims is, of course, not confined to Europe. Earlier this year, on a trip from Pakistan to New York with my wife and baby daughter, I had my usual lengthy encounter at JFK airport with an American version of the same theme. Sent to secondary inspection, I waited my turn to be investigated. Eventually it came, the officer questioning me about such things as whether I had ever been to Mexico or received combat training.

As a result, we were the last passengers on our flight to claim our luggage, a lonely set of suitcases and a foldable playpen on a now-stationary baggage carousel. And until we stepped out of the terminal, my heart kept pounding in a way incongruent with my status as a visitor with papers in order.

When we returned to Pakistan, a shock wave from a suicide bombing, the latest deadly attack by militants intent on destabilizing the country, passed through my sister's office in Lahore. The blast killed several people, but was far enough from the university where my sister teaches not to harm anyone on campus or shatter her windows. It did open her office door, though, pushing it firmly ajar, like a ghost exiting into the hallway outside.

Some might argue episodes such as these are signs of a clash of civilizations. But I think not. Individuals have commonalities that cut across different countries, religions, and languages — and differences that divide those who share a common country, religion, and language. The idea that we fall into civilizations, plural, is merely a politically convenient myth.

Take two notional civilizations, namely those of "Muslims" and "Westerners." To which do my Pakistani friends in Amsterdam or I belong? They are secular and believe in equal rights irrespective of gender or sexual orientation. And I, a citizen and resident of Pakistan, have spent seventeen years in America, longer than the lifetimes of more than seventy million Americans born since 1993.

Westernized Muslims, Islamized Westerners: surely people like us can be disregarded as recent, tiny, and unrepresentative minorities? Actually, no. Fly from Lahore to Madrid and you will find that the words for "shirt" and "soap" are virtually the same in both places, linguistic testament to the fact that people have always intermingled.

Yes, Pakistani murderers set off bombs that annually kill thousands. And yes, some Pakistanis fit the stereotype of poor, radicalized, seminary-educated militants. But they live in a nation where under 10 percent vote for parties of the religious right, where a rapidly growing majority watches television.

Pakistani television programming is incredibly diverse for good reason: so is the country. The blast wave that passed through my sister's office doubtless passed through devout Muslims, atheist Muslims, gay Muslims, funny Muslims, and lovestruck Muslims — not to mention Pakistani Christians, Chinese engineers, American security contractors, and Indian Sikhs. What civilization, then, did the bomb target? And from what civilization did it originate?

Civilizations are illusory. But they are useful illusions. They allow us to deny our common humanity, to allocate power, resources, and rights in ways repugnantly discriminatory.

To maintain the effectiveness of these illusions, they must be associated with something undeniably real. That something is violence. Our civilizations do not cause us to clash. No, our clashing allows us to pretend we belong to civilizations.

In Pakistan, I live as part of an extended family. My parents built their house adjoining that of my grandparents. My wife and I built our apartment above the house of my parents. Our daughter needed a room. So we converted our balcony, adding a corrugated-metal, foam-insulated roof, and some well-shaded, double-glazed windows.

The room was bright, inexpensive, energy efficient, and quick to build. All we wanted, in other words. But then it occurred to us that our daughter's windows faced in the direction of a main road. A hundred yards away were offices, shops, banks. The kinds of places sometimes attacked in our city.

I decided to ask an architect friend whether I ought to consider blast-resistant film for my daughter's windows. Despite four generations of my family having lived in the same place, this was a question none of us had ever posed before. I had no idea whether such films were effective, or how much they might cost.

I did not wonder if they were made by factories in the West, by workers who were Muslim, by both, or by neither. No, I wondered instead if such films were truly transparent. For outside my daughter's windows is a yellow-blooming amaltas tree, beautiful and mighty, and much older than us all.

I hoped not to dim my daughter's view of it.

Reprinted from Discontent and Its Civilization: Dispatches from Lahore, New York, and London by Mohsin Hamid by arrangement with Riverhead Books, a member of Penguin Group (USA) LLC. Copyright © 2015 by Mohsin Hamid.