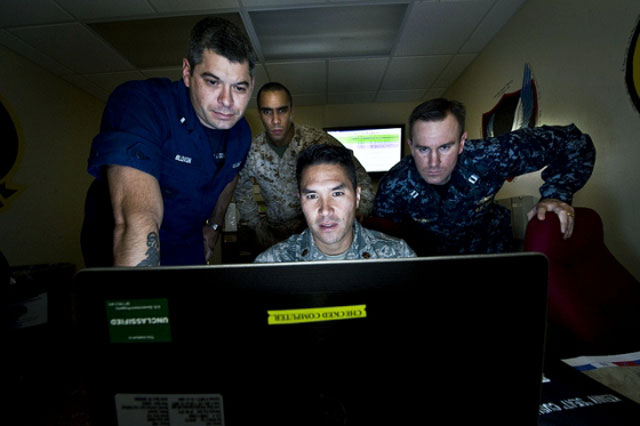 Thomas Rid, a reader in war studies at King's College London and author of the new book Cyber War Will Not Take Place, appears at Asia Society New York tonight, September 16, as part of a panel discussion on cyber security. Joining Rid for the event will be Chad C. Sweet, co-founder and CEO of the Chartoff Group, and William Plummer, vice president of Huawei Technologies. New York Times journalist David Sanger moderates the discussion.

If you can't attend tonight's event in person, the panel will also be a free live webcast at AsiaSociety.org/Live starting at 6:00 pm ET. Viewers are encouraged to submit questions to the panel any time before or during the event via the email address moderator@asiasociety.org or by Twitter or Facebook using the hashtag #askasia. Some questions from our online audience will be incorporated into the discussion.

An excerpt from Cyber War Will Not Take Place appears below.

The threat of cyber war has captured the popular imagination. Hollywood was quick to realize and express these fears for us. Films like Wargames (1983) or, more recently, Die Hard 4.0 (2007) trod the obvious narrative path: dark forces mobilizing arcane and complex computer networks to wreak havoc, holding entire nations hostage and unleashing nuclear war by hacking into the Pentagon's vast and powerful computer systems. Such fears have always touched a deep nerve. Most of us use computers but don't really understand how hardware and software interact. A powerful embodiment of the pervasive human angst of losing control to technology itself was HAL, Stanley Kubrick's terrifying, all-controlling machine aboard a spaceship in 2001: A Space Odyssey (1968). As more and more of us as well as more and more things go online, such fears cut deeper than ever. 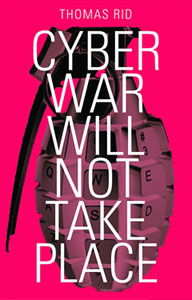 Most people, young and old, carry a smart phone in their pocket at all times. And a great many have become addicted to connectivity, incessantly, sometimes furtively, checking their email and social media feeds — at the dinner table, on the beach, under the table at business meetings, and not just dull ones. An entire generation has grown up who believe that their personal and professional well-being depend on digital devices and constant connectivity. If you are fiddling with your touch screen before your morning coffee is ready, the chances are that you intuitively understand that almost everything that enables the rest of your day is controlled by computers: the water that flows from the tap, the electricity plant that powers your kettle, the traffic lights that help you cross the street, the train that takes you to work, the cash machine that gives you money, the lift that you use in the office, the plane that gets you to Berlin or Delhi or New York, the navigation system you will use to find your way around a less familiar city, and much more besides. All these features of life are now commonplace, and unremarkable — as long as they work. Just as commonplace and insidious is the all-pervasive fear that malicious actors lie in wait, at all hours, to assault and crash these computers and the software they run, thereby bringing entire societies to their knees. Water will stop flowing, the lights go out, trains derail, banks lose our financial records, the roads descend into chaos, elevators fail, and planes fall from the sky. Nobody, this adage has it, is safe from the coming cyber war. Our digital demise is only a question of time.

These fears are diverting. They distract from the real significance of cyber security: in several ways, cyberattacks are not creating more vectors of violent interaction; rather they are making previously violent interactions less violent. Only in the 21st century has it become possible for armed forces to cripple radar stations and missile launchers without having to bomb an adversary's air defense system and kill its personnel and possibly civilians in the process. Now this can be achieved through cyberattack. Only in the 21st century did it become possible for intelligence agencies to exfiltrate and download vast quantities of secret data through computer breaches, without sending spies into dangerous places to bribe, coerce, and possibly harm informants and sources first. Only in the 21st century can rebels and insurgents mobilize dedicated supporters online and get thousands of them to take to the streets, without spreading violence and fear to undermine the government's grip on power.

The ubiquitous rise of networked computers is changing the business of soldiers, spies, and subversives. Cyberspace is creating new — and often non-violent — opportunities for action. But these new opportunities come with their own sets of limitations and challenges, applicable equally to those trying to defend against new attack vectors as much as those seeking to exploit new technology for offensive purposes. This book explores the opportunities and challenges that cyberspace is creating for those who use violence for political purposes, whether they represent a government or not.

Thomas Rid is Reader in War Studies at King's College London. He is also a non-resident fellow at the Center for Transatlantic Relations in the School for Advanced International Studies, Johns Hopkins University, Washington, DC.