Book Excerpt: 'Bending Adversity: Japan and the Art of Survival' by David Pilling 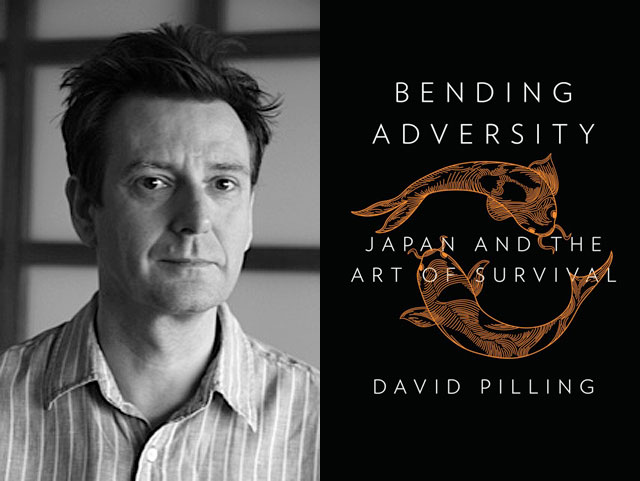 Correspondents from the Financial Times take center stage at Asia Society New York this Thursday, March 20, in a program dedicated to tracing how that newspaper has covered arguably the biggest story in modern Asia — China's financial rise — over the past generation. FT journalists Geoff Dyer, Leslie Hook, James Kynge, Richard McGregor, and David Pilling will join Arthur Ross Director of Asia Society's Center on U.S.-China Relations Orville Schell for a panel discussion that will also (for those who can't attend in person) be a free live webcast at AsiaSociety.org/Live at 6:30 pm New York time on the 20th. (Online viewers are encouraged to submit questions to moderator@asiasociety.org or via Twitter or Facebook using the hashtag #askasia.)

Hong Kong resident David Pilling is currently the Financial Times' Asia editor, after having served as its Tokyo bureau chief from January 2002 to August 2008. Pilling draws on that experience in his new book, Bending Adversity: Japan and the Art of Survival (Penguin Press, 2014), which presents a wide-ranging overview of contemporary Japan as it struggles with a recalcitrant economy and the catastrophic combination of earthquake, tsunami, and nuclear meltdown that struck in March 2011.

In the following excerpt from the book, Pilling recounts how he became immersed in Japanese culture and customs for the first time at the age of 37.

I arrived in Japan in the winter of 2001. Before I started my job as a foreign correspondent in Tokyo, I spent a month beginning to learn the language while I was living with a family in the castle town of Kanazawa, a sort of mini-Kyoto on the rugged Sea of Japan coast. Kanazawa was a charming place with much of its medieval heritage preserved. It had samurai and geisha quarters, a famous garden called Kenroku‑en — like most famous sights in Japan, diplomatically said to be one of the "best three" in the country — and a thriving artistic community of potters, gold-leaf craftsmen and amateur Noh dramatists. On my first day, fresh off the plane from London, I was taken to the sixteenth-century moated castle, an imposing whitewashed structure set on huge stone walls, to attend a tea ceremony. Dozens of people had gathered on a gazebo-like platform in the castle grounds, where the ritual was to take place. I was ushered by my "host mother," Mrs. Nishida, to the very front so that I could sit as close as possible to the proceedings. A woman in kimono prepared the hot water in a sunken hearth, spooning out green powder with a wooden scoop and whisking it with a long brush. Every action she performed, from the way she knelt to her handling of the tea bowl, was precise and rehearsed — a mirror of the actions made in countless other tea ceremonies down the ages. I sat, as did everyone else, in seiza style, legs and feet folded beneath my buttocks, back straight. After a few minutes of initial pain, my limbs grew used to the position and I concentrated on what was going on around me. When the tea was served, we first ate an exquisite handmade sweet, separating it into bite-sized pieces with a small wooden utensil like a large toothpick. Then we earnestly examined the tea bowl’s shape and glaze, and felt the heat of the tea penetrate the fired clay. We rotated the bowl two quarter-turns, before downing the pleasantly bitter, jade-green liquid in quick, noisy slurps.

Japan is a country of performances and role-playing: here we were all actors in a centuries-old pageant, our every action dictated by custom. When the ceremony was over, the other guests rose and took their leave. My lower limbs, however, had lost all feeling and standing was impossible. I was left, alone on the stage, waiting for what seemed like several minutes while a painful tingle slowly crept up my legs as sensation returned. I still regard the experience as my initiation into the pains and pleasures of Japan.

From my first days in Kanazawa, I resolved to embrace the new culture in which I found myself. I ate the food I was served, whether it was crab brains, sea urchin or raw octopus. Slowly I discovered that almost everything the Japanese prepared, however unfamiliar, was fresh and delicious — better, in fact, than any food I had tasted before. At the age of thirty-seven, I plunged into the study of the Japanese language, working my way through a series of exams that obliged me to learn more than 2,000 kanji characters and obscure grammatical constructions. (I eventually learned to read fairly fluently and to conduct stilted interviews, but my Japanese remained like Samuel Johnson’s description of a dog walking on its hind legs: it was not done well, though at my age it was perhaps surprising to find it done at all.) In Kanazawa, I learned to love the routine of living on tatami, the traditional rush-mat flooring. One removed one’s shoes at the house entrance known as the genkan, knelt on the floor to watch TV and unrolled one’s futon at night. The tatami had a comforting, musky smell. Bathing was in a square upright tub, in which you sat only after a thorough scrub in a separate shower area. Sometimes we would walk to the local public bath with its old-fashioned municipal tiles. It had outdoor communal pools of cold, warm and hot sulfurous water and vibrating massage chairs of worn leather in the changing room.

I loved that Japanese people always put their hands together to thank their food before they ate it, and the way they apologized before they asked for money in a shop as though payment sullied the otherwise pleasant human interaction. I learned the correct place at which guests should sit at a table — furthest from the door, a position in former times that was safest from surprise attack. I gained an appreciation for small, considerate gestures. My teacher had told me, for example, that it was rude in a business conversation to say that you were busy, since this might imply that you were more in demand than the person to whom you were speaking. I liked it that even cheap restaurants handed out a hot hand towel before you ate and that, when it rained, there was a machine at the department store to seal your wet umbrella in a plastic cover. I marveled at how social convention trumped laws. The streets were entirely litter-free. No one would dream of answering their mobile phone on the train or in a lift, not because it was illegal but because consideration was expected. Even in the street, people cupped their hands over mouth and phone to muffle the sound of their voice.

This chapter is an excerpt from Bending Adversity: Japan and the Art of Survival, by David Pilling. Copyright © 2014 David Pilling. Reprinted courtesy of Penguin Press.