'A Blank Page Is Never Empty' 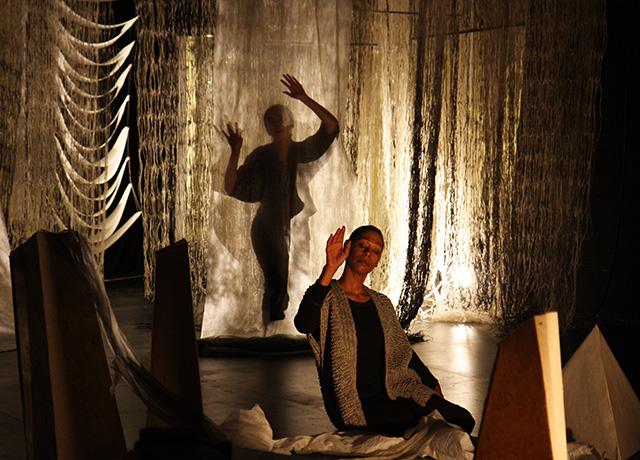 Playwright, director, and lyricist Elise Thoron has a penchant for taking stories not widely heard and bringing them to life on stage. Thoron's latest project, a collaboration with Japanese paper artist and designer, Kyoko Ibe, is no different. In Recycling: Washi Tales, Thoron, Ibe, and the talented ensemble of actors, musicians and set designers use the unique language of washi — Japanese handmade paper — to create four scenes that tell a story about spiritual devotion, beauty, love, and tragedy. Each vignette is a form of recycling in itself: storytelling. Much like the repurposed washi used in each set, these tales are passed on from generations, constantly being reinterpreted and reimagined.

Ahead of the Asia Society premiere of Recycling: Washi Tales in New York, Thoron spoke to AsiaBlog about how the project materialized. Answers have been edited for clarity.

Kyoko Ibe and Elise Thoron will bring 'Recycling: Washi Tales' to Asia Society in New York on Thursday, March 24 and Friday, March 25 from 8 PM to 9:30 PM. For tickets and other information follow the link below. Learn more

What was your first interaction with Kyoko Ibe's work?

Elise Thoron: I first met Kyoko many years ago in Ireland a laboratory retreat in County Wicklow, where a producer had gathered a group of Japanese, Irish, and American artists from different disciplines to explore the Zen aesthetics of the American painter Georgia O'Keefe. I was immediately struck by Kyoko's art work, its natural power and harmony, and the process of its creation. I remember being grateful as we worked on bringing paintings of O'Keefe to life that Kyoko kept an uncompromising, exacting, critical spirit of a great artist present in our midst. Kyoko and I really clicked in a deep, inexplicable way as people and artists, and have wanted to work together creating a theater piece ever since.

In the intervening 12 years, she contacted me every time she was in New York and we met and continued discussing ideas for collaboration. She stayed at my house, introduced me to her friends, and I watched her work evolve. We spoke of adapting a story for the stage, perhaps by Tanizaki or Murakami, our favorite authors. But nothing ever stuck until we found what was under our nose the whole time — the material itself — washi. We just needed to listen and look no further than washi for our tale. 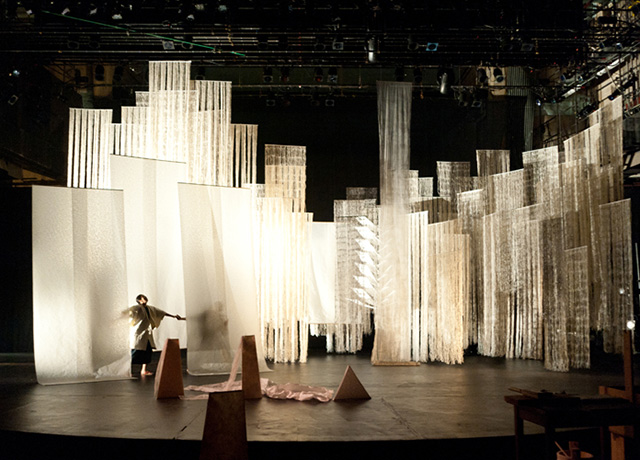 The intricate set for 'Recycling: Washi Tales' is made from recycled paper. (Valerie Oliveiro)

What initially drew you to the paper medium for storytelling? What is it that paper is able to achieve, that a different material can’t quite capture?

ET: Kyoko asked me to edit the translation of her artist's statement for a catalogue of an upcoming exhibition for "Hogosho," (scrap paper) her most recent series. The set panels are made from pages of a 200-year-old book she found recording lives in a northern Japanese village, which no longer exists, in calligraphy that is no longer fully legible to modern eyes. Tax records, marriage records — the substance and accounts of lives led in another time. She has woven them into beautiful new landscapes, horizons with bits of mica that catch the light. The actual kozo (paper fiber) she uses is recycled from the book. Her artist’s statement traces the history of “recycling” paper on many levels: spiritual, aesthetic, historical, and practical.

Working on her artist’s statement, I suddenly had an insight that what I wanted to create with Kyoko is a theater piece about Japanese paper making itself, the history and philosophy behind it. What fascinates me about her work is the medium, the tradition and history she is creating in, and, in this case, the stories the paper contains as it travels through time from a northern Japanese village of long ago. What would happen if one of her panels made of fragments of calligraphy and ancient pulp came to life? What stories would it tell about its many incarnations and origins? 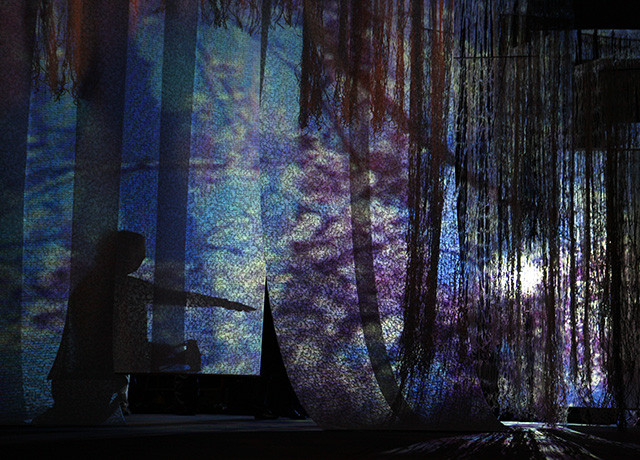 The versatility of the paper medium is expressed through the four different tales featured in 'Recycling: Washi Tales.' (Valerie Oliveiro)

There is a clear unique relationship within Japanese culture and paper arts (origami, shoji window-screens, etc. ). How did this influence Washi Tales?

ET: The ritual and process of handmade papermaking in Japan is calming to the heart and beautiful to behold. As I learned more about the craft and talked with papermakers, they all told me the most important thing was to listen to the water in the vat to know when it is ready. This ancient Japanese craft of using natural materials — water and wood — emerging from hands and labor felt like it had a lot to teach us in our busy age of digital communication. The aesthetics of the ordinary and appreciation of nature within washi drew me to making a theater piece that would allow American audiences to sit and listen to the sounds of papermaking and the stories from different periods of Japanese history that come out of it.

Now we will do the piece in Japan in September and it will be interesting to feel how it resonates there. Many contemporary people do not know that much about washi and seem eager to learn and experience its presence in Kyoko's art work. My American collaborator, Karen Kandel, who perfroms the role of the papermaker, was also in Japan learning to make paper. She returned convinced there was a theater piece to be made about washi. 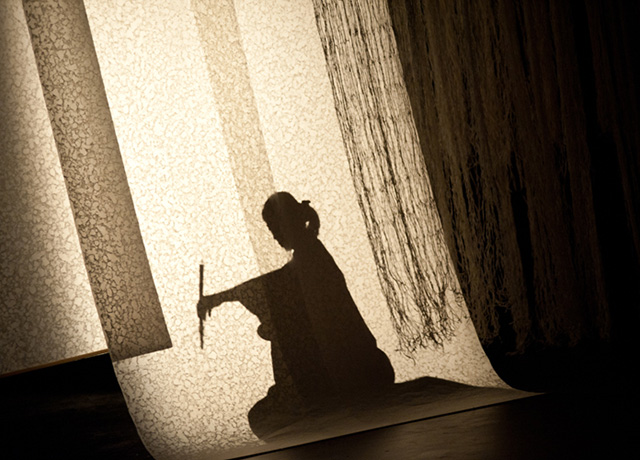 The versatility of the paper medium is expressed through the four different tales featured in 'Recycling: Washi Tales.' (Valerie Oliveiro)

What inspired the parallels of recycling paper and the metaphorical recycling-nature of storytelling?

ET: Kyoko will say that recycling is a part of paper making from an early period. The first recorded instance of recycling is from the Japanese chronicles about Fujiwara Tamiko, the consort of the Emperor Seiwa, in the ninth century. When her lover died, she took his poems and letters he wrote her and recycled them, making new paper on which she wrote sutras for his soul's peace: "re-spiriting paper." This was the first tale I wrote, and a template for the idea that spirits can be carried forward through storytelling. Ink becomes embedded in washi and even when it is recycled it remains in the fiber with a soft-glowing grey. You see in some of Kyoko's washi art, the paper is full of past presences. Old paper is more beautiful — it retains traces and stories. Both Karen and I love the line: "A blank page is never empty."