Biden 'Reaffirms' a US-India Relationship in Need of Stoking 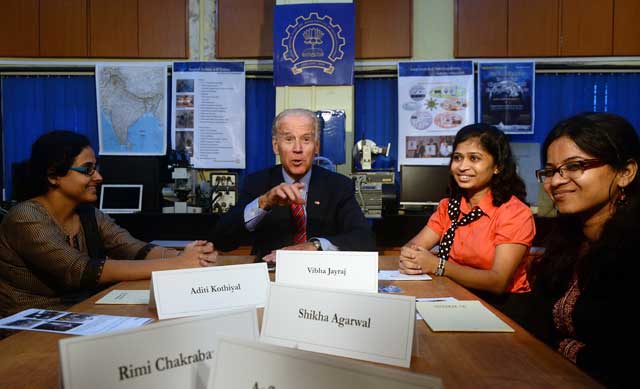 U.S. Vice President Joe Biden (C) interacts with students during a visit to the Indian Institute of Technology (IIT) in Mumbai on July 25, 2013. (Indranil Mukherjee/AFP/Getty Images)

U.S. Vice President Joe Biden's four-day visit to India represented the highest-level Obama administration visit since the U.S. President showed up in 2010. It was a curious visit — Biden did not speak to the press, neither government had a public briefing, no agreements were signed and no statements issued. Biden's visit came just a month after U.S. Secretary of State John Kerry had dropped by for a visit that had more formal bells and whistles.

This could be considered a visit designed to reaffirm the Indo-U.S. relationship at a time when it is seen as being under a cloud. Biden, unlike Kerry, is part of the White House’s inner circle. Given the degree foreign policy-making has been centralized in the Oval Office, Biden was seen as the carrier of a message from Barack Obama to Indian Prime Minister Manmohan Singh.

Biden directly addressed two key areas where New Delhi and Washington are having increasing difficulties: AfPak and economic relations. Neither he nor his Indian interlocutors had solutions. But what he did was to hold open and frank discussions on what the U.S. position on Afghanistan is and the complaints of corporate America on Indian policies.

The policy gap on Afghanistan is considerable, and getting worse. India would prefer the U.S.’s post-withdrawal policy to be about providing arms and money to a Kabul regime to hold off the Taliban. New Delhi thinks the U.S. attempts to arm-twist Afghan President Hamid Karzai into a negotiated settlement with the Afghan Taliban are folly — and not merely because this is a line propagated by the Pakistan military. Washington would like New Delhi to persuade Karzai to take a more positive view of the Taliban talks. It is likely to be disappointed.

Corporate America has many complaints about a rash of recent economic policies carried out by the Indian government. These have included the imposition of stiff transfer taxes on foreign firms, preferential market quotas to help domestic Indian manufacturers and the use of compulsory licensing to force down the price of pharmaceutical firms. Indian software firms, on the other hand, have been bothered by the new U.S. immigration reform bill and the curbs it places on Indian firms doing offshore IT services.

The economic sources of friction are likely to take time to sort out. Some of the protectionist actions of the Indian government are likely to be rolled back soon, for example. But compulsory licensing is likely to continue — though as India points out, it has only used this World Trade Organisation loophole once.

But, as Biden repeatedly pointed out, and which is reaffirmed by Indian officials privately, the two countries are working well together in East Asia and the Indian Ocean. The two countries see eye-to-eye on Myanmar/Burma, on the South China Sea and more generally on how to engage China.

Though Washington is unhappy that defence cooperation has plateaued, the fact is the two countries are closer together militarily than anyone would have believed possible even ten years ago. India and the U.S. have held over 60 military exercises in the past five years, some of them of remarkable sophistication. One State Department official noted that the two had held submarine rescue exercises last year, “something that is at the cutting edge when it comes to the technology accessed.” India is the third-largest buyer of U.S. arms in the world, according to the Pentagon. New Delhi’s most vibrant bilateral defence relationships are with U.S. allies — Israel, Japan, Singapore and Australia.

Both sides have also overcome problem issues that many had predicted would dislocate the relationship, like India's disapproval of Western economic sanctions against Iran.

The underlying reason that the Indo-U.S. relationship no longer attracts the excitement it once did is the domestic state of both countries. The Obama administration has turned inward to a remarkable degree, given a more transactional bent towards its overseas relationships. The Singh government, on the other hand, is on its last legs with elections around the corner and the prime minister unable to pass the legislation needed to revive a slowing economy. Managing the relationship at a lower level of expectation is about as much either side is really prepared to do — and that is what Biden accomplished.