Beyond the Embargo: The Way Ahead for U.S.-Vietnam Strategic Relations | Asia Society Skip to main content

Beyond the Embargo: The Way Ahead for U.S.-Vietnam Strategic Relations 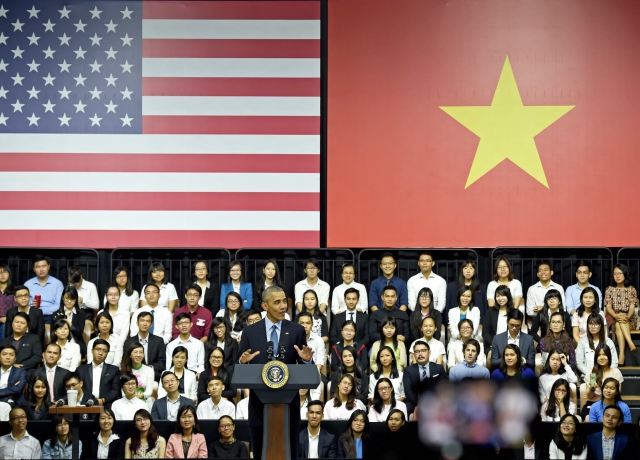 During a May 23 visit to Hanoi, President Obama announced that the U.S. would fully lift an embargo on lethal arms sales to Vietnam that have been in place since the 1960s. The removal of this ban reflects the United States commitment to Vietnam, and removes the last impediment to the full normalization of relations between the two countries.

The Hon. David B. Shear, former U.S. Ambassador to Vietnam and now Principal Deputy Under Secretary of Defense for Policy, has served for 32 years in the foreign service in Vietnam, China, and Japan, and was previously confirmed as the Assistant Secretary of Defense for Asian and Pacific Security Affairs. On June 24, he delivered a briefing as part of the Asia Society Policy Institute’s AsiaConnect series on the future of U.S.-Vietnamese relations in the wake of the president’s visit and the removal of the arms ban. Below are paraphrased highlights from this conversation.

The lifting of the arms ban was a major achievement of the president’s visit, but it’s important to put it into context within the overall changes in our strategic relationship. We really believed that the ban was incongruous given the extent to which the broader U.S. relationship with Vietnam has progressed, and so we agreed that it was the right time to take this step to fully normalize our relationship. Of course, we will proceed with defense transfers at a pace that is appropriate and comfortable for both the United States and Vietnam. As the President said in his public remarks in Vietnam, each arms sale will be decided on a case by case basis following a careful review. Therefore, a major increase in U.S. defense sales is not expected to come immediately after the announcement of a full lift. In the long run however, the decision to lift the ban will ensure that Vietnam has access to the equipment it needs to defend itself, and removes a lingering vestige of the Cold War.

Lifting the arms ban isn’t the only important development in the U.S.-Vietnam defense relationship, which is growing within a number of areas thanks to strong action-oriented forums for discussion between senior-level officials from both sides. The president’s visit was very successful in moving this relationship forward, and we are now looking forward to implementing the next steps in our defense and security cooperation “to-do” list. For example, the U.S. is cooperating closely with Vietnam to implement the next phase of the Southeast Asia Maritime Security Initiative (MSI). We are also expanding cooperation on issues relating to humanitarian assistance and disaster relief, as well as training and capacity-building in order to prepare for the deployment of Vietnam’s first UN peacekeeping force in 2017.

Strengthening Strategic and Economic Ties — China and the TPP

As the president said in Vietnam, the decision to lift the arms embargo wasn’t about China, but rather a desire to move forward with fully normalizing the U.S.-Vietnam relationship. It’s important to remember that the U.S. has a number of strong common interests with the Vietnamese both in the region and more broadly, and we believe that lifting the arms ban will enable the Vietnamese to pursue their interests — including those they have in common with us — throughout the region. Ultimately, the move reflects the changing and expanding nature of the U.S.-Vietnam partnership, as well as our interest in a strong, prosperous, and independent Vietnam.

Our desire for strategic cooperation intersects with our interest in strengthening mutual economic ties, two themes that often go hand-in-hand. Discussions about the importance of ratifying and implementing the Trans-Pacific Partnership (TPP) were a central agenda item of the president’s visit. While the TPP will benefit the United States and Vietnam economically, it is also a very strategic agreement. The TPP will allow members throughout Southeast Asia to maximize the diversity of their trading relationships in a way that offers a wide range of benefits for both themselves and the United States.

Human rights and legal reform were topics that figured prominently in the president’s interactions and public remarks in Vietnam. He had a very candid and comprehensive discussion with Vietnamese leaders on this subject, and made his views on the importance of this issue known both publicly and privately throughout the visit. This is something I also did at every opportunity when I was the U.S. Ambassador to Vietnam, and I know Ambassador Ted Osius does the same.

Going forward, the U.S. looks forward to working with the Vietnamese on legal reform as well as the passage of key laws, including on religion and association. There are also strong provisions within the TPP agreement on labor rights and freedom of association for unions. We plan to work with the Vietnamese to provide them with technical support for the implementation of TPP across the board. Human rights remains a critical agenda item for us in the U.S.-Vietnam dialogue, and the results of the president’s visit reflect the understanding on both sides that this will remain extremely important in the future.

Lauren Caserta is an intern at the Asia Society Policy Institute and a master's candidate at the Johns Hopkins School of Advanced International Studies.