By Bashing 'China Inc.,' US Presidential Candidates Miss the Point 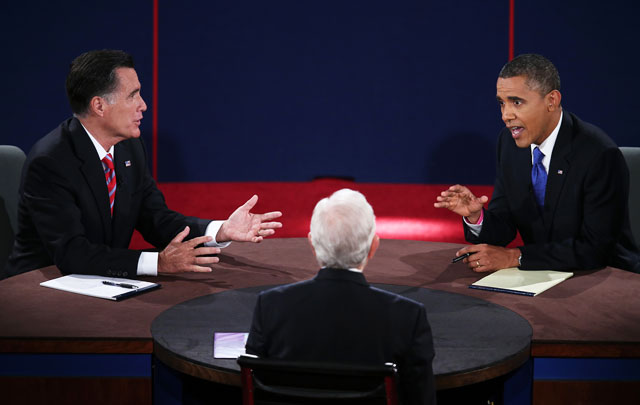 When President Barack Obama and Governor Mitt Romney talked about China in the presidential debates, they could have been speaking as board members of Apple discussing their business rival and "copy-cat," Samsung. Both candidates seemed to be more focused on talking about the vague entity known as "China Inc.," not the real China, a country that is playing a more and more important role in world politics, as both competitor and partner of the United States.

Since the beginning of this presidential campaign, China has been treated as a domestic economic problem rather than an international policy issue. For instance, Romney thinks that Russia is a geopolitical foe, but China is all about jobs, markets, currency, trade and copyright law. Meanwhile, Obama thinks good education can help the U.S. compete with Chinese workers, and makes it seem like the main goal of his famous "Pivot to Asia" policy is securing American jobs, not containing a growing regional power. Both candidates have limited the China-bashing game to trade issues. This "China Inc." narrative makes some sense for the politicians because it's the language that average American voters can understand, especially in this time of economic crisis.

It's also the kind of rhetoric that Beijing has grown accustomed to and no longer fears. Since former President Bill Clinton unlinked China's PNTR (Permanent Normal Trade Relations) from human rights in 2000, Chinese leaders have gotten used to non-political trade quarrels. As long as money talks, Beijing understands. After watching each of the four debates, Chinese president-to-be Xi Jinping can sleep soundly. Whoever sits in the White House next year, China will keep the same negotiating posture toward the United States that it has had over the last decade.

But these "Apple-Samsung" style debates destroyed the unrealistic hope among some new Chinese supporters of the Republican ticket. Chinese Internet users can now watch the debates live and participate in the discussion with fellow bloggers in real time. Obama is still very popular in China, and would win 7-to-1 over Romney, according to a poll in Sina Weibo, China's top social media site. But more and more Chinese bloggers are rooting for the Republicans for their "free market" values and because of an assumption that a Republican president might be more likely stand up to the Chinese government on the issue of human rights.

Since 1978, the free market and the Internet have been the only two source of liberty for the Chinese people, and the United States has been the role model for freedom-lovers in China. So it's not surprising that Romney, a self-proclaimed defender of free markets, has gained some grassroots love from Chinese netizens. But the fact that Romney didn't mention the phrase "human rights" once with regard to China during the debates should be a wake-up call for Romney's Chinese supporters to realize that Sino-U.S. relations are far more complex than they had thought.

It's fair that China has become a domestic issue in the U.S. presidential debates while some Chinese hope that Romney would be willing to become involved with Chinese politics. This is a world where Chinese and Americans are so desperately interconnected that the relationship goes beyond reality to faulty narratives and fantasies that fuel needs on both sides without dealing with the most important issues.

As the quickening pace of global change presents new challenges that cross national boundaries, Asia and the United States must look to a new generation of leaders for fresh ideas and imaginative solutions. The Asia Society’s Asia 21 Young Leaders Initiative is designed to identify, nurture, and develop these types of leaders across the Asia-Pacific community to foster deep, mutual understanding, build lasting transnational networks, and develop cooperative responses to address shared challenges. Established in 2006, the Initiative now includes a network of more than 700 young leaders representing every country in the region and nearly all sectors, and has become the Asia-Pacific region’s leading network for emerging leaders under the age of 40. For more information about all things Asia 21 –related, please visit: http://sites.asiasociety.org/asia21summit/.

Michael Anti (Jing Zhao) is an Asia Society Asia 21 Young Leader as well as a journalist and political blogger known for his posts about freedom of the press in China.
@mranti