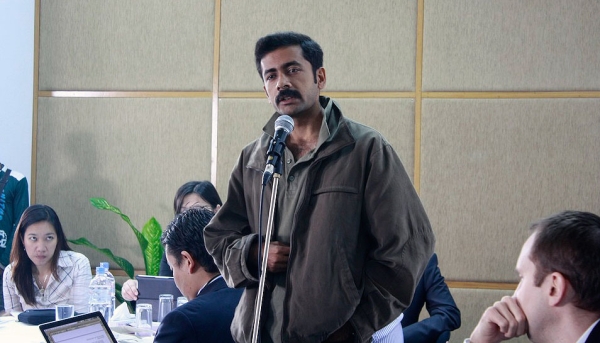 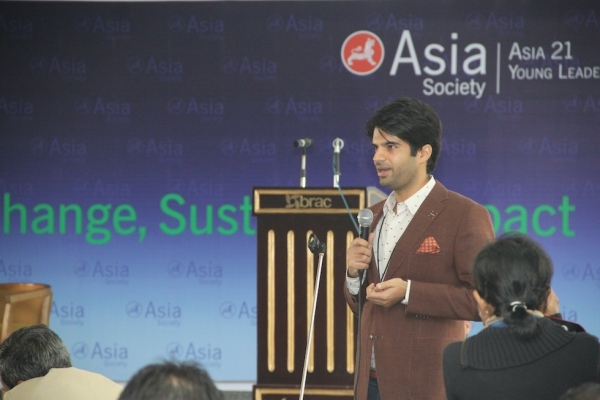 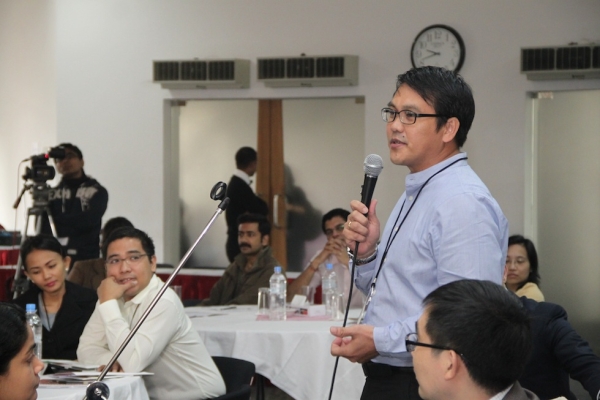 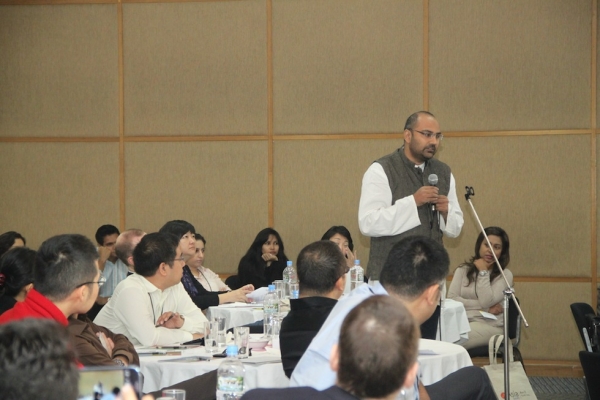 One by one they came to the microphones, some gingerly, some with great gusto, each with a remarkable story to share. The speakers were members of the Asia Society's Asia 21 young leaders program — rising stars from more than 20 nations, representing a kaleidoscope of professional backgrounds. They had gathered for a three-day conference in Dhaka, and on this morning the proposition was basic: What moment or experience in their lives had most influenced their climb to leadership?

"I was a street kid, basically," said Arnel Casanova, a young man from the Philippines who added, with a twinkle in his eye, "and I was not so handsome as I am today." A "street kid" with seven brothers and sisters, a street kid who would spend time after school looking for scraps to help put food on the family table. Arnel's "leadership story" was about a childhood trauma, his memory of being called to the head teacher's office one afternoon and accused of theft. He had not stolen anything, but the teacher would have none of his explanations. Only later did Arnel realize that he had fallen under suspicion because of the way he looked — shabby, dirty, wearing tattered clothes. Arnel told the Asia 21 group that he had always felt he could handle the privation — he had after all known nothing else — but that in the teacher's office he faltered, unable to handle this moment that stripped him of his dignity as well. "From this moment I told myself, 'I am going to prove my teacher wrong.'"

And so he did — and then some. Arnel Casanova rose to the top of his class, won acceptance to Harvard, and when our Asia 21 team "discovered" Arnel in 2008, he was General Counsel of the Bases Conversion and Development Authority in the Philippines, responsible for the post-U.S. life of military bases in his island nation. Our instinct — that this was a young leader to watch — had been spot-on. Today Arnel is CEO of the same organization, and founder of AvantChange, a social-welfare enterprise. Speaking in Bangladesh, Arnel Casanova gave a modest and matter-of-fact account of his remarkable — and literal — rags-to-riches rise. But he did allow one immodest moment, recalling how he felt as he marched out of that teacher's office, two decades ago. "I realized," he told the Asia 21 group, the twinkle flashing again, "I have a beautiful mind."

Shaffi Mather's "leadership moment" had been even more stark — coming as it did when a friend died, waiting for an ambulance that never arrived. Soon after, Shaffi's own mother barely made it to the hospital because the ambulance service was late and slow. Shaffi learned that across India, this was a common thing — countless people lost to the snail's pace of emergency care — and he vowed to change that. "It wasn't something I felt I could watch, as a young person in my country." Shaffi Mather left a promising job at Reliance Industries to start Ambulance Access For All, a for-profit service with a sliding scale payment system that has revolutionized medical transport in Mumbai and Kerala. Today the organization is a model for developing-world non-profit organizations; among a slew of remarkable statistics ("beautiful numbers," a woman at my table remarked), Shaffi highlighted this one: 6,200 babies have been born — safely — in his ambulances. 6,200 children who might not be alive today, had it not been for a lightning-bolt of leadership thinking, and one enterprising young man.

Perhaps the most remarkable thing about these Asia 21 leaders was that in the conference center at Dhaka, none of the stories really was remarkable. A pair of filmmakers took their turns at the microphone. Pakistan's Adnan Malik recounted his father's "opening batsman" speech — a cricket reference, but you didn’t need to understand cricket to get his point. At the age of twelve Adnan had been afraid to take the coveted "opening batsman" spot — it being too critical, too high-profile, too nerve-wracking. His father had urged him to be bold, and seize the opportunity. "Face the first ball," he told his son. Adnan struggled at first, but ultimately excelled, and today he realizes that his father's advice has helped him well beyond the cricket pitch. "’Have a big heart,’ my father would say. ‘Take a chance. Become an opening batsman in your life.'" Today Adnan Malik is a widely-acclaimed documentarian, TV host, and advocate for the environment.

Next came the Indian filmmaker Nitin Das. He told of the visit he'd made to a Kerala hospital for the terminally ill. Nitin had spent time with an 11-year-old girl in the late stages of bone cancer, and with her already-grieving parents. The girl, Nitin remembered, had been physically fragile but emotionally strong. "I am just going to the next life, a little sooner than the rest of you," she said. Nitin Das told his “Asia 21” colleagues that he had learned his "leadership lesson" when that girl breathed her last. "I knew then that life was brief and fragile," he said, "and that I must find something to do in my life that would live longer than me."

And so it went. Once the testimonials were done, tears in some eyes, the Asia 21 group got down to business. There was Shaffi Mather huddling with Undra Agvaanluvsan, a scientist from Mongolia. She wanted to know how the ambulance project could be replicated in Ulan Bataar. A knot of delegates — an Australian venture capitalist, a Cambodian businessman, a Chinese-American diplomat, among others — were brainstorming about a "Burma 21," a chance to take the “Asia 21” franchise and bring its power to a place in need of freshly-minted leaders. "My country has had to come out of a terrible time," Dararith Lim, born in Cambodia, told me. He was six years old when his family left Cambodia for Australia in 1981 — and he returned only two decades later. Today Dararith is his country's representative for General Electric, which is already active in the newly democratic Burma. "Perhaps I, or my company, can be of help." An "Afghanistan 21” is already up and running, some very talented and energetic young Afghans working to help their nation prepare for life after the U.S. troop withdrawal. An intrepid journalist named Lotfullah Najafizada — 26 years young and already chief current affairs correspondent for Afghanistan's first 24-hour news channel — had worked together with other Asia 21 colleagues in the drafting of policy papers for international conferences in Bonn, Chicago and Tokyo; now he and other Afghans were spearheading a "Ten Years, Ten Ideas" plan for Afghanistan. Meanwhile the "Class of 2012," the newest members of the Asia 21 family, had decided to help spread the work and influence of the NGO Embrace, which designs and distributes low-cost, high-tech infant warmers in poor rural areas.

Overall, the antiseptic-looking conference room was a hive of such activity, a kind of seedbed for entrepreneurial wisdom. "This is the whole idea," said Mike Kulma, the New York-based Asia Society staffer who runs the Asia 21 program. "Take this great network of young leaders and put them to work."

Since Asia 21 was born seven years ago, with seed funding from Founding International Sponsor Bank of America, roughly 800 people from more than 30 nations have come through its ranks, tackling everything from public health to public diplomacy — from building cultural bridges to actual bridges. Each year a new corps joins returning "alumni" at a summit, a different venue but always the same fundamental goals: identify problems, brainstorm about solutions, and get to work.

Perhaps the most interesting idea heard in Bangladesh came from a group of Indians and Pakistanis who are working — as one Pakistani development worker put it — to "counter the narrative" of an unresolvable enmity between the two nations and their people. Here were young civil society workers, lawyers, politicians and journalists from India and Pakistan, searching for ways to put their smarts and their leadership abilities to work for the noble purpose of peacemaking. They had discussed policy papers and conferences and the like, but what they came up with in the end was simple — and stirring.

It was Mekhala Krishnamurthy, a social anthropolgist from Mumbai, who stepped forward to explain. They would produce a book and a kind of media campaign called "The Eediot's Guide to India-Pakistan Dosti." Dosti is Hindi for friendship, and the idea was that the team would use a simple, graphic pamphlet approach to promote "Dosti," and then spread it as widely and effectively as possible. There would be cartoons and possibly a short film; the printed booklet would be translated into local dialects for wide dissemination in India and Pakistan; and the global diaspora of Indians and Pakistanis would help disseminate the message. "This is about communicating two things to our two peoples," Mekhala said. "First, that there is a cost to conflict. Second, that there are great benefits that will come if we can get along. There are compelling, creative ways to spread that message."

While the young leaders brainstorm, the Asia 21 meetings also include visits from local dignitaries, proven leaders who come to dispense their own counsel on leadership. At Dhaka, Dr. Shirin Sharmin Chaudhury, Bangladesh's Minister for Women's and Children Affairs, implored the young people to "follow their dreams, wherever these may lead." Sir Fazle Abed, an icon of the global fight against poverty and founder of BRAC — perhaps the world's most successful NGO — told the group that if they did nothing else after the Dhaka conference they must at least always "follow the heart." "The heart," he said, "does not lie. It pushes you one way, or another. It will tell you, as a leader, which path is best on which to lead." Both Abed and Dr. Chaudhury pronounced themselves impressed with the Asia 21 group, the latter going so far as to say, "it is a very noble thing you have done, in bringing these young people together."

At the Asia Society, not surprisingly, we agree wholeheartedly. After all, we have been working to bring people and cultures together for more than half a century. In this case, we have built a network — a rich vein which we and those who work with us can tap in so many meaningful ways. In a way, I thought, after three days in Dhaka, Asia 21 is more than a network; it's a movement. A stirring group that stands ready to help. Even, perhaps, to change the world. But as the delegates left Bangladesh, they — and we — were thinking of what would happen next, beyond the summit, in terms of concrete action. It was as Nitin Das had said, in his emotional talk about the 11-year-old victim of cancer. We must all leave something behind, he had said. What might we do in our lives that would live on, after we were gone?