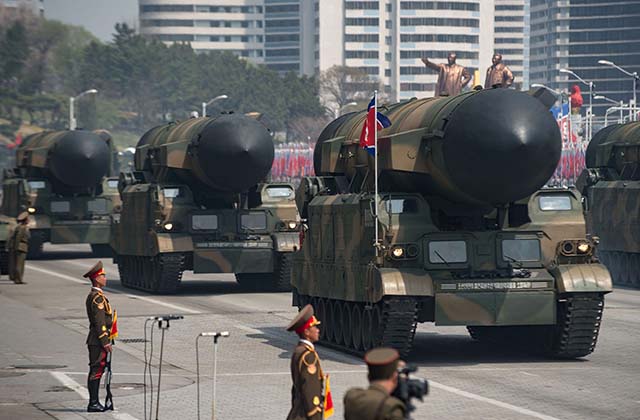 Rockets are displayed during a military parade marking the 105th anniversary of the birth of late North Korean leader Kim Il-Sung in Pyongyang on April 15, 2017. (Ed Jones/AFP/Getty)

In spite of a steady stream of sanctions and widespread international condemnation, North Korea continues to develop and test increasingly sophisticated weapons systems. As the country sits on the cusp of possessing the capability to strike the continental United States with a nuclear tipped ballistic missile, is there any way North Korea can be persuaded to abandon course? Are Donald Trump’s America and Kim Jong Un’s North Korea careening toward armed conflict? Or will the world eventually have to live with a nuclear North Korea? In this episode of the Asia Abridged podcast, analysts including Sue Mi Terry, Danny Russel, and Chung-in Moon look at the realistic options for dealing with the crisis.