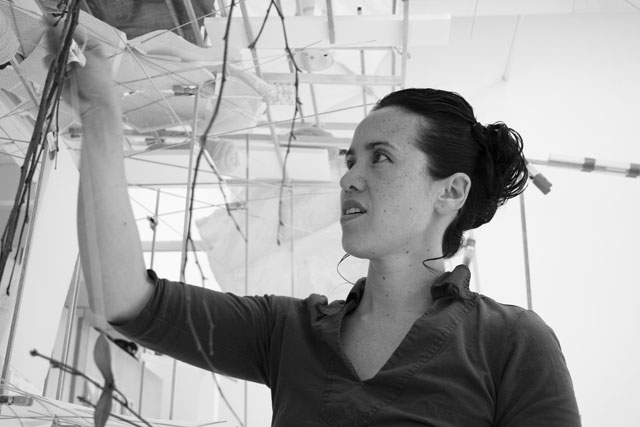 American artist Sarah Sze — whose solo exhibition Sarah Sze: Infinite Line is on display at Asia Society Museum in New York through March 25, 2012 — has been named the U.S. representative at the prestigious Venice Art Biennale in 2013 by the State Department’s Bureau of Educational and Cultural Affairs.

Sze, 43, known for using everyday objects like plastic utensils and toothpicks in her architectural art installations, will spend two months working on her exhibit in Venice prior to the opening of the Biennale, one of the world's largest contemporary art exhibitions. Founded in 1895 and held in the Giardini neighborhood of Venice, the Venice Biennale currently houses 30 national pavilions, though the number of countries represented continues to grow.

“We are thrilled that Sarah Sze has been chosen to represent the United States at the Venice Biennale,” said Asia Society Senior Vice President for Global Arts and Culture Programs Melissa Chiu.

"Sze is a talented and visionary artist that Asia Society has supported since her first endeavor here in 2001. At that time, we commissioned her to create a site-specific installation, Hidden Relief, to celebrate our expansion and renovation. We very much hope that people will come to see her current exhibition Sarah Sze: Infinite Line, featuring her works on paper and a series of new installations. It is a unique opportunity to see her work first-hand and experience what a fabulous artist and creative thinker she is."

The New York Times spoke with Sze about her plans for Venice:

Ms. Sze said she would create a sequence of environments inside the pavilion, a 1930s Palladian-style structure designed by Delano & Aldrich, and in the courtyard in front of it. The installation, called Triple Point, will be about "orientation and disorientation," Ms. Sze said in a telephone interview.

"I plan to create a new commission in the courtyard that brings the inside out,” she added. "Wandering around Venice without a map, you find the most incredible things. And I'm hoping to create an immersive environment that deals with that abstract experience of discovery."

... [Sze said] she will probably spend about two months in Venice, creating her installation with help from Italian university students. "My work is always a mix of stuff collected over time and all over the place," she explained. Venice is an especially rich hunting ground, she said, adding that she expects to use local materials and local craftspeople.

Sze, who lives and works in New York City, is also well known for her Model for a Habitat, an avarian architectural experiment that rises out of Manhattan's popular High Line public park, which is built on an abandoned elevated freight rail line.

Sze will appear at Asia Society New York on March 14 alongside her husband, the acclaimed writer Siddhartha Mukherjee, in conversation with Asia Society President Vishakha Desai. Details and ticket information can be found here. (For those unable to attend, a free live webcast of the event will be available at AsiaSociety.org/Live.)