The Arrival of Chinese-Style Nationalism in American Politics 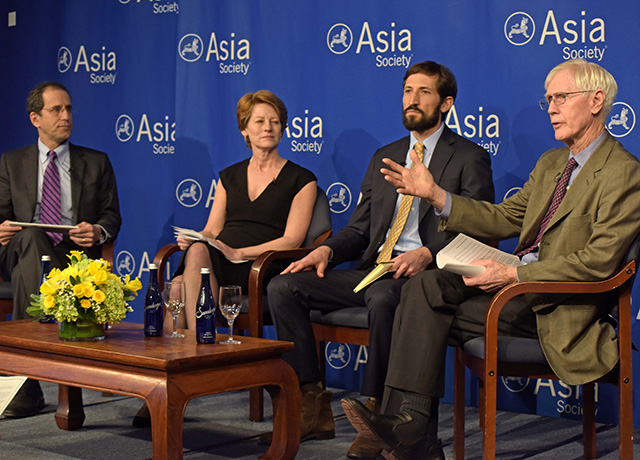 The outcome of the Presidential election will have profound effects on U.S.-China relations. (Elsa Ruiz/Asia Society)

In the decades since introducing market reforms, the Chinese Communist Party has regularly relied on nationalism as a tool to unite its 1.3 billion people.

Chinese leaders aren't unique in this strategy, however. During the present U.S. election season, several presidential candidates have dialed up nationalist rhetoric — often, in the process, by taking swipes at China.

"It feels like China-bashing. It feels like rhetoric," said Winnie O'Kelley, executive editor of Bloomberg News, at a panel discussion held at Asia Society on Wednesday. "I think it does speak to the fear that we've talked about of the middle classes and lower classes in this country, and whenever there's a time of great fear, they look for a bogeyman and [China] has become an easy one to have."

According to Justin Vogt, deputy managing editor and books editor of Foreign Affairs, this behavior in the U.S. elections bears an uncomfortable resemblance to that in other countries.

“[People in this country] sometimes look at places like China and Russia and say ‘why do these people kind of fall for this sort of cheap nationalism?’ … People tend to look at that and say, ‘oh, this is a sign that this society is not really far along and not sophisticated. Well, guess what? It works here too.”

But O'Kelley noted a major distinction in U.S. and Chinese forms of nationalism.

“The thing that stuck with me the most when I came back from China was that pervasive nationalism — but what’s different, at least to me, was that the [Chinese] people had such faith in their government,” she said. “Which is exactly the opposite of what we see here. It’s so striking. They’re not at all the same. Total faith.”

Fred Hiatt, the editorial page editor of The Washington Post, cited another difference: “It’s a bit different in China, it's been the official version of history. It’s been propounded for the last 20 years. Other versions of history are not permitted. For young people, they have no alternative vision,” he said. “It’s dangerous here, but at least, so far, we have the ability to debate it and push back.”

Watch a clip of the discussion below: