'Arrival' Actor Tzi Ma on Being Outspoken in Hollywood 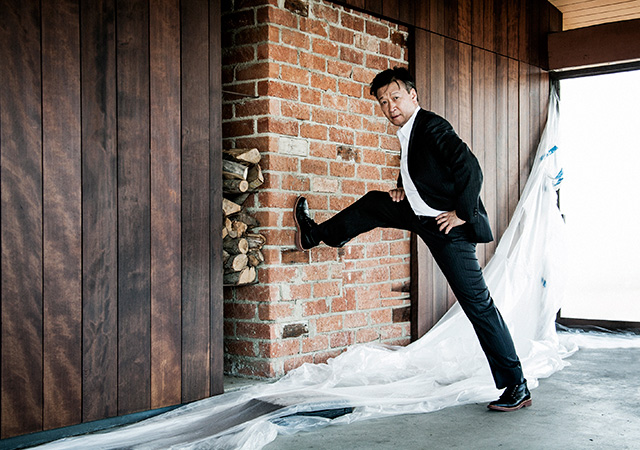 Born in Hong Kong and raised in New York, the actor Tzi Ma isn't one to mince words, relying on his sharp tongue to survive in show business and fight for quality roles when he first began acting. Though Ma toyed with the idea of pursuing other career options to appease his traditional parents, he couldn't stay away from acting for long: He began on the stage before shifting to film and television acting. In his 20-year career, the 54-year-old Ma has seen the landscape for Asian American actors change, as substantive roles are now replacing shallow and one-dimensional ones. He now appears in one of the year's biggest blockbusters, the sci-fi thriller Arrival, starring Amy Adams, Forest Whitaker, and Jeremy Renner.

Asia Blog spoke to Ma about learning how to speak up for Asian Americans and how Hollywood's rising interest in China impacts actors in the United States. Some answers have been edited for clarity.

You studied classical theater and dance. What made you decide to pursue acting as a career?

It was simply always something I wanted to do. The dance and classical theater were the bridges to what I am doing today. So, it was just a lot of disguising it, you know? Because of how we see this particular profession. I believe that this view is probably changing a little bit. As Alan Yang said at the Emmy’s, just give us a few [Asian] kids that don’t play the violin. Just a few! We don’t need a whole bunch of you to change. So yeah, it was something I always wanted to do. I knew that very early on — at maybe two or three years old.

Of course, I considered another profession. I majored in so many disciplines: pre-med, political science, you name it, I pretty much did it. I went to school for six years, just to kind of avoid getting a degree. I switched majors so many times, my advisor was like, “Son, you need to focus!” I said, "I am focused." I was just focused on something else. It was all a trick to please my parents at the time. It gave me a chance to work and take classes and do workshops. It was an exciting shell game!

You appeared in the documentary The Slanted Screen, which discusses the stereotypical portrayal of Asian men in Hollywood. What was it like auditioning for roles back when you started acting? How does it compare to now?

My experience auditioning throughout my career has been a little bit off the beaten path. I was always very vocal. Always. If there were any problems with scripts that I would see, I would ask those questions. Of course, back then, I was less articulate. I’ve been known to storm out, I’ve been known to say some choice words that people didn’t appreciate. Because I focused the first 12 years of my career on the theater, I didn’t have to deal with it as much because I didn’t care about film and television at the time — which was kind of foolish, since they're such powerful media and we need to recognize the power that they bring. I remember going to a commercial audition and they were asking me, “What are you?” You know, that forever question we [Asian Americans] receive. “What are you?” And I said, “I’m an American,” and they say, “No, where are you from?” Ultimately, they wanted a Cambodian actor. And I said, “Okay, name two.” They couldn't name any. And they said, "Well you know, everyone wants to do this,” and I said, “I don’t," I turned around and walked out.

Through the years it has gotten easier because it’s been easier for me to articulate my concerns without lighting the room on fire. I think it's a lesson. You know, speaking out is not an easy thing to do. It needs practice. The first few times you try it and you fail, it doesn’t mean you will fail again the next time. You will get better at it. Trust me, I know.

Hollywood is full of egos — everyone thinks they know everything. When you walk into an audition, they’ll ask you, “Do you have any questions?” I love when they ask that. “As a matter a fact, I do have some questions. Here’s a character name that's Vinh, which is Vietnamese, and he’s leaving from Cambodia and coming to America and they are being pursued by the Tang, which is Chinese. Who is he? Is he a Cambodian boat captain that’s ethnically Vietnamese? Is he a Vietnamese that got to Cambodia to make the trek to America?" And there’s always silence in the room. Back in the day, there was no Google, no way to research. You have to feel for these writers. What happens is you have an assignment — “I have a great idea, guys, we’re going to do an Asian episode!” And you know, most of the people in the Writers Guild of America are middle-aged, white, American males — still today! What do they know about us?

They make the decisions on who these characters are. So it’s basically a chop suey of a character that they bring to the table. In a lot of ways they are relieved that an actor can come in and ask these questions and say, “I have a solution to this.”

So do you find that there is more authenticity in roles nowadays? Roles that are more thought out or three-dimensional?

I think there is a slight trend towards that direction. I’ve been fortunate to work in roles that go with that slight trend, and it’s headed in the right direction. But some people are stubborn. They don’t care. They’re still going to go and write these little fantasies. That’s how it is. They don’t reach out, they don’t really have a connection to who we are.

But there’s improvement. I don’t wanna — look, I’m a pretty optimistic guy. I’m constantly looking for those improvements. And you know what, I’ll always say something — “You know what guys, this is really terrific, thank you very much.” I think that’s a good way to start. You learn.

Hollywood has become more interested in attracting Chinese audiences, and more films have Chinese co-production. What kind of impact do you think this will have for Asian American actors and directors?

It’s an illusion. Whatever they are doing, whatever co-production they are trying to do with Hollywood and China, China has a very specific plan. They love this business, they want to be part of it, they want to dominate this business. They’re great businessmen, they’re gonna do it. It’s simple. The writing's on the wall. But as far as hiring Asian American actors is concerned? No, they want to hire their own. They’ll say, “Here’s a coproduction deal, this guy must have a Chinese passport.”

So, how does that affect Asian Americans? Perception affects us. They [Hollywood executives] think that by hiring us they will get a better chance at a release in China because there is a Chinese element to it. Whether or not that’s true, we don’t know, because it still doesn’t happen often.

The next progression is what the Chinese call “the flower pot.” It’s when you put a Chinese national in a film, but they don’t do anything, they don’t say anything, they are just kind of there. The perception of that will affect us. You can’t give up [on speaking out] though. You get on that soapbox and you do it. The ignorance is relentless coming from the other side.

You star in the upcoming blockbuster Arrival, a sci-fi action movie that has a lot to do with communication and cooperation to avoid a global disaster. Tell us a little about the project and the role of “General Shang.”

The studio wants us to say that this is really a thriller with a sci-fi element. But it’s much more. Much more than they give it credit for. You look at this film, it is one of those unique films that is a big film, but it is really an intimate film. It is a very small story in a lot of ways. It follows this woman, basically a single mom, who has a tragic loss in her life but also happens to be a brilliant linguist. It has so much heart. It’s a smart film. It doesn’t mean that it’s difficult to understand, but it’s one of those films that lingers after you leave. Given today’s climate, given today’s volatile situation, everywhere you go, there are fires that need to be put out. The apex of the film is about when we’re at the brink of destruction, what do we do as human beings? How do we answer that question? This teaches something. You have to communicate in a particular way that is going to be peaceful. There are so many unknowns, much like what we are facing today, but, the important lesson is not to focus on the differences. It’s the similarities, which are many, that we should focus on.

The film is beautiful. Beautifully done. It reminds me of a black and white watercolor. Very elegant when you drop that black ink and diffuses on parchment paper, it’s just gorgeous. And the score — oh man! Jóhann Jóhannsson is just amazing. It’s interesting — it’s very Eastern. It’s got this kind of Tibetan feel to it. It’s really kind of cool. It’s got this deep French horn that kind of brass, rich, sound. I mean really, it’s a near-perfect film in that sense.

You also landed a recurring role on the second season of Amazon Prime’s The Man in the High Castle. Streaming sites like Amazon, Netflix, and Hulu continue to dominate online conversation and awards recognition when it comes to film and television. From an actor’s perspective, what do you think about this shift toward online streaming?

I think creatively it’s very exciting. You don’t have the shackles of network television; Because it uses public airways, you are restricted on what you can do or say or show. So all the good writers are flocking to cable and streaming because they are kind of able to just open the floodgates on whatever they want and how they want to present it. So in that sense, it is really exciting. I mean really, television is where the gold is right now. If another superhero film comes out I think I’m gonna die! I’m telling you, it’s so saturated. So you turn to television, and it’s so specific — if you don’t like it, you don’t have to watch it, and if you do, you can totally binge all night and day long. I like it, I like the trend.

It also allows for certain stories that would never have been told because maybe they would have been canceled by the second episode [on network television]. [Streaming] allows these stories to figure it out along the way because they have a 10-episode order to work with.