Are the US and China Finally Getting Serious About Climate Change? | Asia Society Skip to main content

Are the US and China Finally Getting Serious About Climate Change? 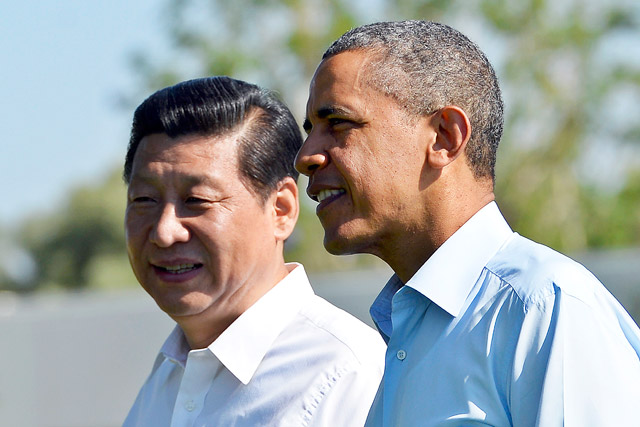 At last week’s G-20 summit in St. Petersburg, Russia, presidents Barack Obama and Xi Jinping announced that they would seek to eliminate potent greenhouse gases (GHGs) through the 1987 Montreal Protocol, the landmark treaty that successfully phased out ozone-depleting substances decades ago.

This follows on the heels of the June Sunnylands Summit in California, where the two leaders agreed to work together to phase down the consumption and production of hydrofluorocarbons (HFCs) — substitutes for ozone-depleting chlorofluorocarbons (CFCs) and GHGs. In July, the U.S.-China Climate Change Working Group submitted a report to the U.S.-China Strategic and Economic Dialogue (S&ED) proposing five new action initiatives involving transportation; smart grids; carbon capture, utilization, and storage; energy efficiency; and data transparency.

Taken together, these developments have raised some hope that the so-called “Group of Two” is getting serious about climate change and low carbon development.

Both China and the United States are facing mounting international pressure to reduce GHG emissions. The two countries accounted for 43 percent of global emissions in 2011. China has become the world’s top emitter, while the United States remains the largest cumulative emitter since the industrial revolution.

International climate negotiations have so far failed to rein in U.S. and Chinese GHG emissions. Under the Kyoto Protocol (KP), neither country was subject to the quantified emission limitation or reduction commitments. China was ruled to be exempt on the basis of the "common but differentiated responsibility" principle — a firewall for developing countries granted by the United Nations Framework Convention on Climate Change (UNFCCC). The United States signed the KP but never submitted it to Congress for ratification, mainly due to concerns over its industrial competitiveness and the absence of major emitters like China. As Beijing and Washington continue to point fingers at each other while citing historical or future responsibilities, they bear the brunt of responsibility for the gridlock within which international climate negotiations are mired.

Disagreement over the best way forward remains a key challenge. The United States prefers to deal with a limited number of large emitters such as those in the Major Economies Forum. Meanwhile, China insists that negotiations be conducted through the UN, worried that the United States would gain greater negotiating power in a smaller forum that excludes the vast majority of developing countries allied with China in UN climate negotiations.

Moreover, considerable domestic obstacles to comprehensive climate action in both countries present significant challenges to progress. Both Washington and Beijing are reluctant to restrict emissions through caps or carbon taxes. In the United States, failed federal climate legislation is not simply a matter of partisan politics as three presidents — two Democrats and one Republican — foiled U.S. participation in the Kyoto Protocol. The Byrd-Hagel resolution, which prevents the United States from joining an international climate treaty without the participation of all major emitters, was passed unanimously in the Senate in 1997.

Climate change has been included in China’s 12th Five-Year Plan, which sets explicit emission intensity targets, measured by emissions per unit of GDP for each province. But addressing climate change in a global context remains a low priority since it is seen as being in conflict with domestic economic growth. China’s climate mitigation efforts in the short run will likely be far from sufficient to convince the United States to sign on to a climate treaty.

The recent U.S.-China agreement to work together on HFCs emerged as a nice surprise from the Sunnylands Summit, but details on next steps remain unclear. If the United States does not offer Beijing any financial and technological assistance, China is unlikely to phase down HFCs at its own cost. And although the S&ED report identified a set of climate actions common to both countries, it said little about implementation. As a more detailed plan is drafted, a re-instatement of already existing policies would not be surprising.

An international treaty that sets legally binding emission targets on all countries should be the ultimate political goal. However, it is clear that Washington and Beijing are not even close to getting there. The best we can hope for at the moment is the continuation of steps to develop bilateral climate agreements. Although these initial steps alone are not expected to result in significant emission reductions in the near-term, they could go a long way toward helping to build trust and establish the common ground necessary to establish a more comprehensive climate treaty down the road.