Are Drone Strikes Killing Terrorists or Creating Them? 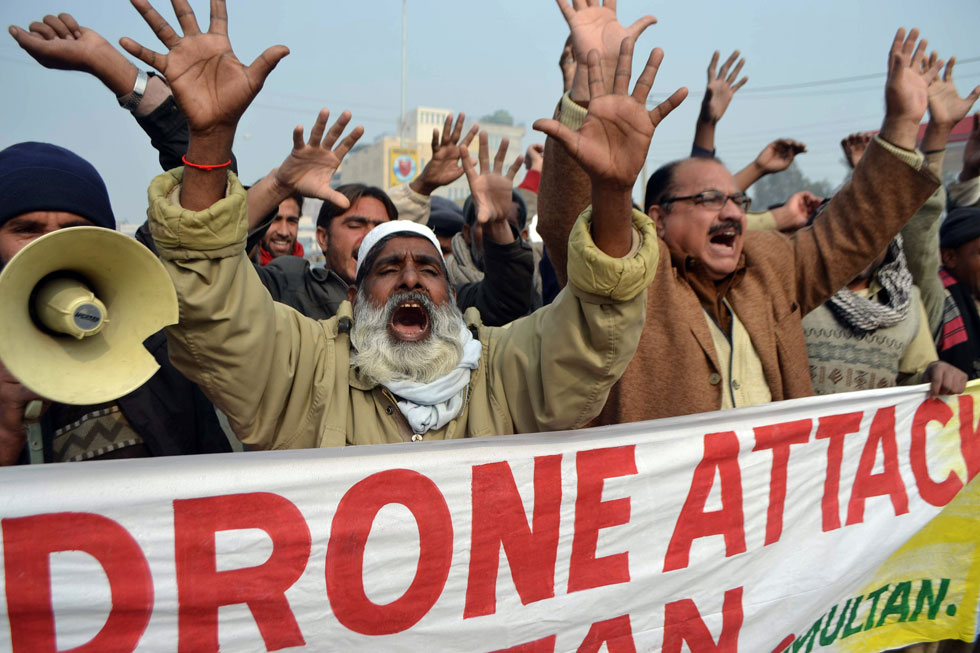 Pakistani demonstrators shout anti-US slogans during a protest in Multan on January 8, 2013, against the drone attacks in Pakistan's tribal areas. (S.S Mirza/AFP/Getty Images)

There's been a lot of chatter recently about "Out of Sight, Out of Mind," a new online infographic which shows a chilling visualization of all estimated deaths in Pakistan caused by U.S. drone strikes, including children and civilians, based on estimates from the Bureau of Investigative Journalism and New America Foundation. Whether you agree with the numbers, or the politics, behind this particular project (put together by the data visualization firm Pitch Interactive), at least it's sparking debate. And that's got to be a good thing — there's still so much we don't know about this highly controversial issue.

To say that the use of drone strikes is a polarizing topic would be a vast understatement. In U.S. policy circles, it's projected as an effective counter-terrorism tactic, whereas globally, it is often seen as tacit abuse of state sovereignty. And that's before you get to the debate over potential international law and human rights violations.

Take, for example, the use of drone strikes to target al-Qaida, the Taliban and their affiliates in the restive tribal belt of Pakistan bordering Afghanistan. There are a variety of studies available regarding the accuracy, reliability and ultimate effectiveness of this tool of war, and, using the same data, analysts can come to very different conclusions depending on their particular point of view, or — in some cases — that of their employers.

For some, the percentage of civilian deaths is the criterion, and for others, denying the terrorists sanctuary is a critical benchmark. The problem is a lack of credible data (and consensus) regarding exactly how many terrorists have been killed by drone strikes and who those terrorists are. Thus, objectivity has become another victim in the process.

In my assessment, the ground realities that must be kept in mind in this analysis include:

Regardless, killing terrorists is only a stopgap arrangement. A corresponding and parallel development strategy for bringing the tribal areas into mainstream Pakistan is in dire need in order to empower girls like Malala Yousafzai, who challenged the insufferable Taliban worldview by standing up for education. This inclusiveness has long been the missing component in U.S. policy, and tragically, it remains so. Dismantling the al-Qaida network is a worthwhile goal, but de-radicalization is equally important.

It is not that there has been no U.S. investment in education, but rather, the dilemma is lack of balance in use of hard and soft power. In some cases bureaucratic hurdles delayed implementation of well-intentioned development plans. Inter-agency disconnect is yet another challenge. Pakistan’s malfunctioning counterterrorism policy and entrenched regional rivalries only exacerbate the situation.

There were roughly 350 drone strikes in the tribal areas since 2004, at an exorbitant cost (even though drone strikes offer a cheaper option in comparison to "boots on ground"). But how many schools were opened in the region over the same period of time? The answer is distressing, as the number of schools has actually declined sharply.

Damages to more than 460 schools throughout the tribal belt at the hands of Taliban has in fact displaced 62,000 children, including 23,000 girls, from school. It doesn’t require very high intelligence to guess that in the absence of schools, and with an increase in violence, what kind of future awaits these kids. Drone strikes may take out some of those who destroyed these schools, but that is hardly a sustainable solution to the larger problem.