Amitav Ghosh: Oil, Opium and the Religion of Free Trade 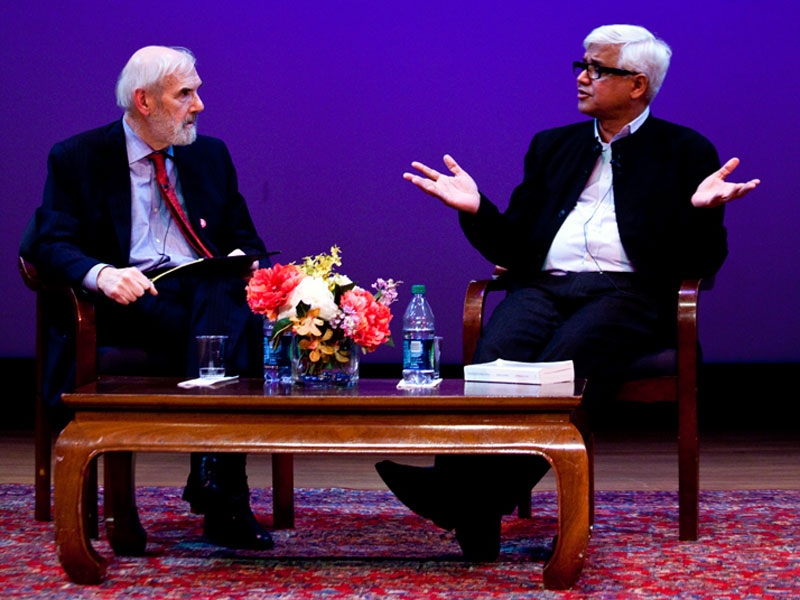 UPDATE: Jay Corcoran filmed some behind the scenes interviews with Amitav Ghosh, Jonathan Spence and members of the audience. (Scroll to the bottom of the page to watch.)

The relevance of past to present took center stage at Asia Society last night, when historical novelist Amitav Ghosh drew a provocative parallel between the Opium Wars of the 1830s and the present day.

Ghosh was appearing with China historian Jonathan Spence in the inaugural program of Asia Society's Chindia Dialogues, a four-day forum intended to foster cultural exchange between Chinese and Indian writers and performers.

The moment began when Radio Open Source journalist Christopher Lydon, speaking from the audience, asked Ghosh whether his historical novels Sea of Poppies and River of Smoke, set during the Opium Wars, can be read as "coded commentary" on more recent wars involving "the other big 'O' commodity" — oil.

Clearly amused by Lydon's "mischievous" question, Ghosh conceded that parallels between the present day and the period he was writing about were obvious. The British merchants behind the Opium Wars, he said, liked to boast that "When our [British] troops march into Canton, there will be cheering in the streets."

Many of those merchants, he added, were among the earliest adherents to Adam Smith's ideas about free trade and free markets. Ghosh argued that those theories, which form the basis of neoclassical economics, are now presented as "not an ideology, not a doctrine," but as a virtual law of nature, removed from the kinds of historical context and real-world consequences he shows in his novels.

Ghosh then went on to note that just a day earlier, a group of Harvard University students had staged a walkout at the introductory economics class taught by Professor Greg Mankiw, and wondered whether that event didn't represent the beginning of a "sea change" in contemporary attitudes about free markets and free trade.

When Lydon suggested that maybe Harvard students should walk out of Niall Ferguson's history classes as well, Ghosh chuckled and said, "Absolutely — I couldn't agree more."