Ambassador Locke: US 'Not Trying to Contain China' 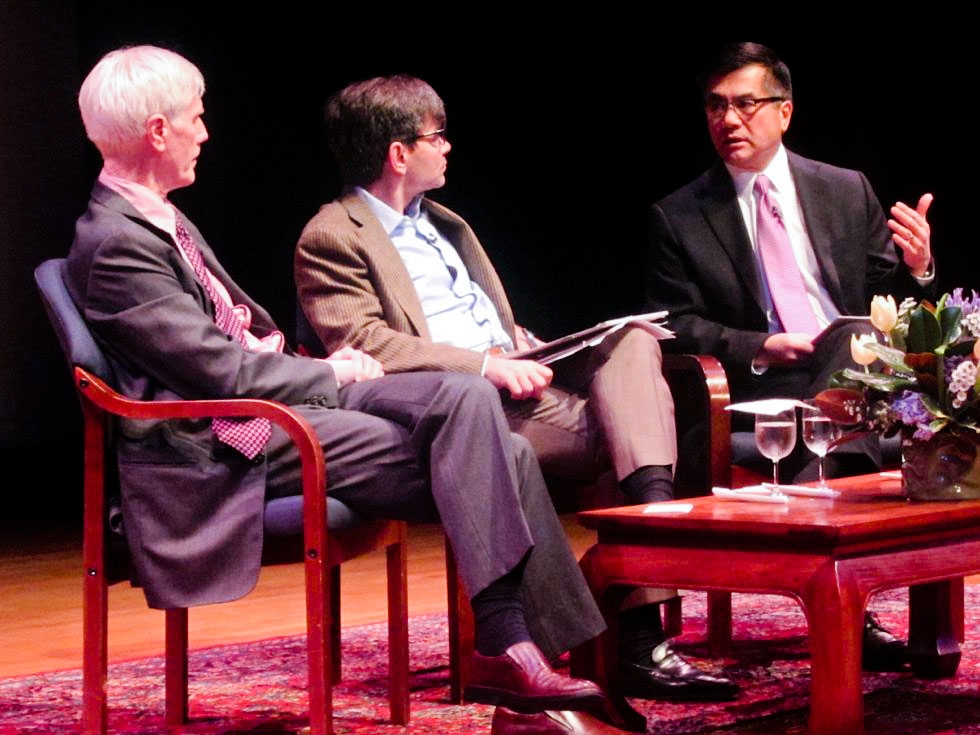 "There will be continuity in the U.S.-China relationship," Locke told a standing-room-only crowd at Asia Society in New York on Monday evening. "So much of the world's economy is in the Asia-Pacific arena. Almost 60 percent of the world's GDP is in the Asia-Pacific region. And we are so economically intertwined as two countries. ... So many of the problems facing the world today will only be solved with the United States and China cooperating and collaborating together."

Locke was joined on stage by moderator George Stephanopoulos, of ABC News, and Asia Society's own Orville Schell, who heads up the Center on U.S.-China Relations.

Locke and Schell both had positive things to say about new Chinese leader Xi Jinping, who was named Hu Jintao's successor at the highly secretive 18th Party Congress of the Communist Party of China in Beijing last month (complete Asia Society coverage here).

"He's very much more casual, more at ease in public and with people," Locke said. But he later added, "We don’t really have a great sense of the policies of Xi Jinping, because China is ruled by a committee of seven. … We really won't know for a while exactly how fast, how far he’s going to move, and what areas he’ll emphasize.”

"The reason why we don't know more about Xi Jinping," Schell said, "is because it doesn't serve well in the present scheme of things to stick your tail up too tall and to demonstrate too much of an individual perspective."

Stephanopoulos asked Locke and Schell about the recent U.S. "pivot" or "rebalance" toward Asia and how that is being perceived in China. Locke said it was natural for the United States to look to Asia — a region it had "ignored" — as the country extricates itself from situations in Iraq and Afghanistan.

"We're not trying to contain China," Locke said. "The pivot also includes greater engagement with China. President Obama has actually met with president Hu Jintao 12 or 14 times. Secretary of State Clinton has been to China seven times. ... It's a recognition of the importance of the entire Asia-Pacific region."

Schell offered a different view. "I think [Chinese officials] are concerned, and it does excite a lot of the old Cold War thinking," he said. "I think what they mostly fear is that somehow they will, at least officially, that they will be contained, that there is some kind of big plan to encircle them. This brings back memories of when China was very isolated during the Cold War."

Locke, who served as U.S. Commerce Secretary and Governor of Washington before being named Ambassador to China in July 2011, also discussed how he has been received in China. Chinese citizens, increasingly upset over the privilege and perks enjoyed by top Party leaders, turned Locke into a minor celebrity in August 2011 as news broke that he flew coach to Beijing, carried his own bags and attempted to buy coffee using a coupon at an airport Starbucks.

Locke said the Chinese have also been intrigued by his ethnicity — he's a third-generation Chinese-American.

"In some ways they expect me ... to take the Chinese side on all the issues," Locke said. "Shortly after I arrived, and even before I arrived, there was some commentary over the internet, you know, 'You've got to look at his record ... he may be Chinese [but he's] yellow on the outside, white on the inside.' They called me a 'banana.'"

Prior to the event, Locke participated in a town-hall-style conversation with Chinese-language students from seven New York City schools participating in Asia Society's International Studies Schools and Confucius Classrooms networks.

On North Korea's recent missile launch: "We now think it's time for tougher actions. And so we're really engaging with China and other members of the United Nations Security Council on tougher resolutions and possibly sanctions against North Korea."

On U.S.-China trade relations: "The American people and the American Congress have to believe that we will make sure that when we lower barriers and open our markets to companies from other countries, that those other countries will also do the same for America, and that’s why the president was very clear during the campaign — not rhetoric — that we’re going to hold other countries’ feet to the fire with respect to trade agreements and ensure a level playing field."

On rhetoric from the U.S. Congress: "We're constantly reinforcing the message that we have two totally independent branches of government, that the Congress does not necessarily speak for the United States."

On the Diaoyu/Senkaku Islands: "For instance over the Diaoyutai or Senkaku islands, the dispute with Japan on these islands, the Chinese believe that the United States supports Japan and even put Japan up to the purchase of the island, simply because we have a treaty with Japan. ... We have defense treaties with many other countries, that doesn’t mean we agree with the actions of all of our allies. Trying to make that differentiation has been very difficult."

On human rights: "On the broader issue of human rights though, we have made that a top priority. We meet with lawyer groups, human rights groups within China, legal groups, ethnic minorities constantly; we raise these issues with the Chinese government at every point both publicly and privately.”