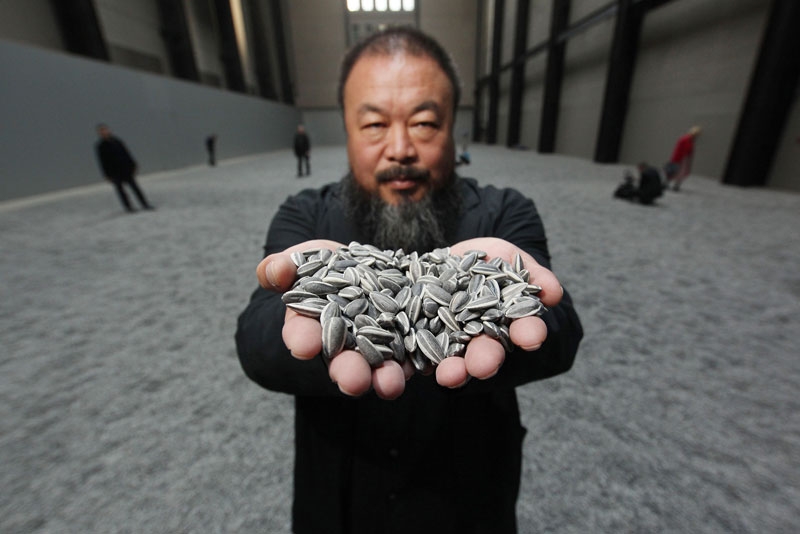 When outspoken Chinese artist Ai Weiwei was detained yesterday at a Beijing airport before a planned flight to Hong Kong, it signaled a more serious government attempt to curb his activities and ability to travel. Although he is frequently referred to as a “dissident” voice, until now he conducted an international art career traveling with frequency to attend his art openings. Recently, one of his most attention-grabbing events was the opening celebration at the Tate Museum last October for his installation of porcelain sunflower seeds.

Although his statements on government actions and policies to the media and through his own tweets and blogs have been seen as political, his art rarely addresses such issues overtly. Now the question is whether his statements have gone too far. There is no doubt that the Chinese government is carefully watching the outcome of protests in North Africa and the Middle East. Will the Chinese government make Ai Weiwei into the next Liu Xiaobo?

In the video below, from January 2011, I reflect on the new parameters of creative expression in China, as illustrated by the career of Ai Weiwei.

China stamps out the Jasmine Revolution: A return to 1989? (The Week)
Ai Weiwei: Disturbing the peace (The New Yorker)
Ai Weiwei’s New York Project to Go Forward, With or Without Him (New York Times)

Melissa Chiu is Director of the Asia Society Museum in New York.