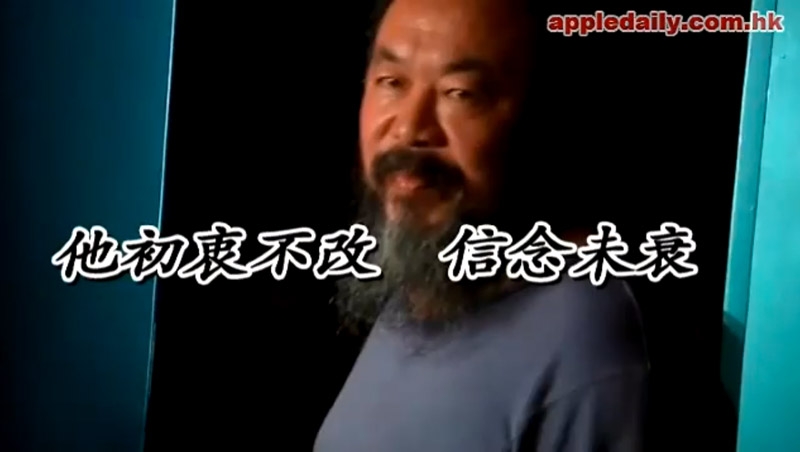 UPDATE: Ai Weiwei appears to be testing his limits again. The artist — supposedly banned from Twitter by the Chinese government — sent out two short tweets today (or someone using his account sent them out). The first tweet said 问个好吧。(Let's say hi.) and the second tweet said 嗯，抱抱。安 (Ah, hugs. Peace.). This was the first time the Twitter account @aiww had been active since April 3.

It seems Chinese artist and activist Ai Weiwei — who was released from detention on June 22 (details here) — is settling back into everyday life in Beijing. A journalist bumped into him at a bank, and accidentally scored the first post-gag-order interview with the controversial figure, according to a story in Hong Kong's Apple Daily (subscription required, but you can find the story, in traditional Chinese, reprinted here).

Ai told the reporter he was interrogated 52 times during his 81-day detention.

"I completely lost touch with the outside world, just myself sitting alone in the dark," Ai reportedly said. "I was afraid that just being so silent nobody would know I was there, no one would ever know. I was like a little soy bean, dropped on the ground, rolling into some crack in the corner, silent, left there forever."

In the next paragraph, Ai says, "I just want to enjoy my life."

Ai talked a bit about the jail conditions. For example, on the third day he was allowed to shower.

"It was really great to be able to shower," Ai said. "You know people in any environment all still have such longing, such yearning in their heart. It's not just me, the children of those guards watching me, they're also people, and they also never lose that faith and longing. In my heart, I still hold hope, hope in the people of this nation, and while society is comprised of many people, this strengthened my faith."

Later in the story, the reporter asked: "Can I come to see you?"

Ai laughed and said, "My number hasn't changed, it's just that people will come listen in."

We are nearing the final week for the Ai Weiwei: New York Photos 1983-1993 exhibition at Asia Society Museum, which closes August 14. Don't miss out. For details, visit the exhibition's official site.

Zach Montague contributed to this report.