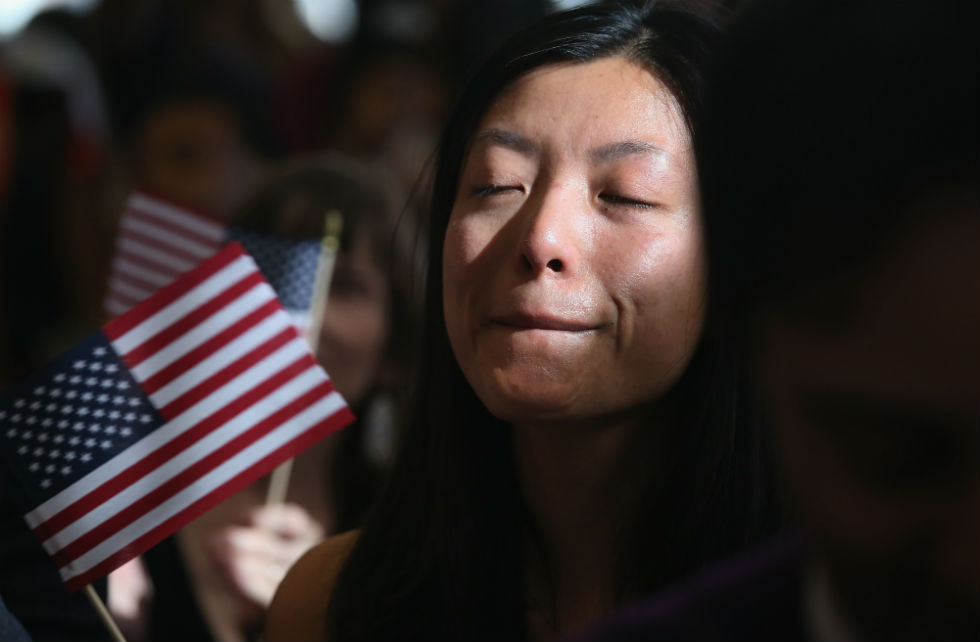 Chinese immigrant and new American citizen Yi Shu holds back tears after taking the oath of citizenship at a naturalization ceremony on April 9, 2013 in New York City. (John Moore/Getty Images)

This weekend marks the opening of The Other Side: Chinese and Mexican Immigration to America at Asia Society Texas Center. Through the works of six contemporary artists, the exhibition explores the complex issues of immigration through common threads of memory, history, identity, and humanity.

For historical context in anticipation of the opening, here’s a look at the history and journey of Chinese immigration to the United States.

The Other Side: Chinese and Mexican Immigration to America opens March 28, 2015 at Asia Society Texas Center.Featuring six contemporary artists, the exhibition explores recurring issues of immigration, border relations, and labor practices that have persisted throughout U.S. history and remain timely today. Learn more

Many of the first Chinese Americans came from Canton (now Guangdong) province in southern China. Their destination: “Gum San” (Gold Mountain), or California, where they joined prospectors from across America and around the world chasing after the gold that was first discovered at Sutter’s Mill in 1848.

The conditions in southern China, which suffered from famine and civil war, accelerated this first wave of immigration. As a result, the Chinese American population, mostly male, grew from 325 in 1848 to 20,000 in 1852.

After the Gold Rush subsided, up to 12,000 Chinese were recruited by the Central Pacific Railroad Corporation to work on the Transcontinental Railroad, which was considered one of the great engineering achievements of its time. When the project was completed in 1869, however, nearly all the railroad workers were laid off, and many returned to California, where some worked in factory or farm labor, while others became small business owners.

However, the 1870s brought an economic crisis to the United States, where the increase in labor supply after the Civil War created fierce competition for jobs. This fueled resentment, discrimination, and violence against the Chinese, and culminated in the passing of the Chinese Exclusion Act in 1882 by the U.S. Congress. This legislation halted all immigration from China and denied citizenship to the Chinese already in the United States.

In the following decades, the Chinese Exclusion Act was reinforced with other exclusionary legislation, including the 1924 Immigration Act. During this period, Chinese Americans were ghettoized, clustering in Chinatowns in cities such as San Francisco and New York.

In part to improve relations with China (a World War II ally), President Franklin D. Roosevelt signed the Magnuson Act in 1943, repealing the Chinese Exclusion Act that had been in effect for over half a century. This act granted the Chinese the ability to become American citizens, and allowed 105 Chinese to immigrate to the United States per year.

Despite the repeal of the Chinese Exclusion Act, Chinese immigration continued to face strong restrictions until the passage of the Immigration and Nationality Act of 1965. This act eliminated the existing quota system, allowing more skilled workers and their families to enter the United States.

The majority of Chinese American immigrants in the 1960s and 1970s came from Taiwan and Kong Kong, many of whom were college and graduate students and professionals, and achieved upward social mobility in the United States. After the Chinese government loosened restrictions on emigration in 1977, immigration from Mainland China increased as well.

In recent decades, Chinese American immigration has increasingly come from Mainland China, representing not only highly educated professionals, but also undocumented immigrants in the working class. With a population of nearly 3.8 million as of 2010, the demographics will continue to evolve, as second and third-generation Chinese Americans emerge and an increasingly diverse set of regions in China are represented.