After the King: What's Next for Thailand? | Asia Society Skip to main content

After the King: What's Next for Thailand? 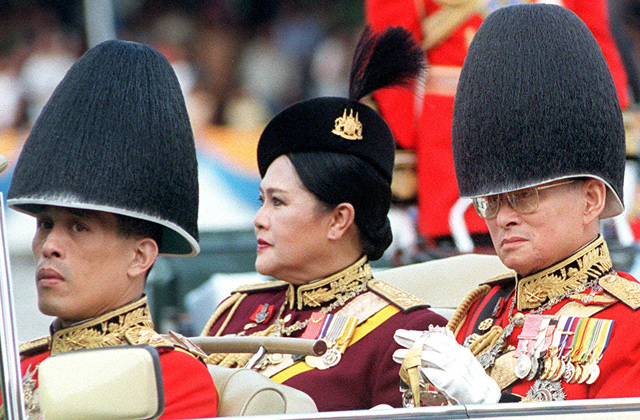 The death of Thailand's King Bhumibol Adulyajev last week has left a tremendous void in the country, where the beloved 88-year-old monarch was considered to be a unifying force. Since 1972, the king's only son — Crown Prince Vajiralongkorn — has been Bhumibol's anointed successor. But the 62-year-old crown prince, who has a reputation for being a frivolous playboy, is regarded with suspicion among the Thai public, delaying his ascension to the throne.

The stakes for Thailand are high. Politically, the country is divided between an urban elite (referred to as "yellow shirts") and the rural poor ("red shirts"). Twice in the past decade, Thailand's military — aligned with the yellow shirts — has overthrown popularly elected governments, raising serious doubts about the strength of the country's democratic institutions. When he becomes king, Vajiralongkorn, like his father, will hold little actual political power — but observers agree that he will nonetheless play an important role in maintaining stability in Thailand.

In order to get a sense of where Thailand goes next, Asia Blog caught up with John Ciorciari, an Asia Society Asia 21 Young Leader and associate professor and director of the International Policy Center at the Gerald R. Ford School of Public Policy at the University of Michigan. The interview has been lightly edited for clarity.

Why did the crown prince not immediately become king?

Following the normal course of precedent, he would become king, and it looks likely that he will — but there is a whole host of concerns about his personal conduct and whether he’s fit for the job. His sister is widely considered to be very responsible and presentable and to carry herself like a good Thai royal should, but Vajiralongkorn's own past is one of playboy antics and problematic marriages that spilled over into criminal allegations. If he were seen as a more kingly figure, there probably would not have been much question at all about whether he’d be the successor. But I think [this situation] came about because of his own personal characteristics more than because there’s an obvious ambiguity in the normal chain of succession.

Was there ever any attempt by the Thai government or people to change the order of succession?

People have certainly suggested that she should be. But it’s often tough to say with certainty who’s pushing an agenda when it comes to Thai court politics because the law and the soft norms surrounding the discussion of the monarchy are very, very strict in Thailand. I have heard through third and fourth-hand accounts or read in journal articles and the press over the years that there was some discussion in Thai political circles that she might be a better choice, but I’m not aware of any formal public petition.

In short, I’m not aware of who exactly was most engaged in pushing consideration for her as a candidate, just as I’m not sure now who exactly is seen as being part of Vajiralongkorn's camp, so to speak, within the political elite, and who is seen as being more suspicious of the crown prince or inclined to support other figures in the royal family.

Lindsey Ford of the Asia Society Policy Institute speaks to CCTV about the life and legacy of King Bhumibol of Thailand.

Is there any sense that the crown prince has allegiances toward the yellow or red shirts? Is he controversial because he's seen as less than neutral? Or are his problems merely, as you’ve said, personality-driven and behavioral?

The king had the traditional monarchical allegiances to the urban middle class and the economic elite in Bangkok, but also the immense cultural, social, and political prestige in the tiniest villages in the countryside. I don’t think there’s any sense that the crown prince has the same depth of popular allegiance and respect in all parts of Thailand; He’s just not revered as uniformly as his father was. What that suggests is that the monarchy, which is very much on the "yellow" side in the context of contemporary Thai politics, won’t necessarily be able to reach the "red" constituencies as easily as they could in the past.

Neighboring Cambodia is a similar example. When Prince Sihanouk was alive, he was revered. You’d walk into any house in Cambodia, and regardless of the political orientation of the family and how they’d vote, Sihanouk's picture was likely to be somewhere over the mantlepiece. In Thailand, that’s the same way that the late king was regarded. I don’t think the crown prince is going to enjoy that [regard], so I think he has less of a unifying capacity.

As for whom he would benefit — and which way that would shift Thai politics — he’s probably still going to be able to cultivate a strong constituency among the yellow forces in Thai politics: the military, the conservative urban elite, and those in areas with large Muslim populations. I would expect that if anything he’s going to push things in a way where yellow and red are even more starkly divided than they were in the past when they could always appeal to this king whom everyone respected.

Do you feel that in this interim period, when the crown prince hasn’t yet become king, that there is a lot of political risk in Thailand? That one side or another might make a move to take advantage of the vacuum?

I would say that I think for a short period of time — let’s say weeks, maybe months — that popular reverence for the king was so great and the mourning period is taken so seriously in Thai society that the potential cost of a political move by one side or another would be very high. That is to say, if the public perceived one or more political actors as trying to step into a vacuum, as you put it, and take advantage of the king’s passing, I think there’d be a lot of public resentment.

Probably in the short run there will be some waiting and seeing. But in the slightly longer term, if you're looking over the next few years, I think both the yellow and red political leadership would be incentivized to reconstitute a new order that would almost inevitably not be as reliant on the central figure of the monarch. For the yellow shirts, who have a durable electoral deficit, the incentives are probably to try to lock in a very strong continuing role for the monarchy which might further crystallize the political divisions in the country. On the other hand, the red shirts will have a real incentive not only to try to neutralize the crown and have it not play a pro-yellow role but probably also an incentive to see the monarchy’s institutional centrality decline to some extent. Everyone’s expectation I think is that when push comes to shove, the monarchy will tilt yellow. Red shirt leadership then would probably want to see the monarchy play a less decisive role in Thai politics and instead have the ballot box play a more decisive role because that is where they have a comparative advantage.

Do you think this period of time presents an opportunity for Thailand to relax its lese majeste laws?

I think the institution will remain intact. As for the lese majeste laws, it's more of a "wait-and-see" situation. If somebody were to suggest that the rules be changed quickly, I think that would be met with a lot of resistance. But over a period of years, there will certainly be some in Thailand who will want to see those rules changed. They’re really quite draconian, so it’d hardly be surprising if some or many Thais thought they should be relaxed a little.

It’s always been hard for me to separate how much the lese majeste rules are attributable to the institution of the monarchy and how much was just pertinent to this particular king who was so widely revered and who was in power for such a long period of time. My suspicion was that it had much to do with the latter, that it was possible to have these really strict rules in part because there was just such general reverence and respect for the king. Politically, one can maintain these very draconian lese majeste rules. I think the new king is going to have some people love him and some people who will not be fans, so I would expect more of a battle over that. Over time I think it’ll weaken.

Do you feel that the uncertainty about Thailand’s political future, with the king’s death, might dampen foreign investment and hurt the economy?

There are a couple of things that I think help Thailand here. One thing is, despite the political mess that Thailand has experienced over the last decade, the bureaucracy has been handled and managed by a relatively competent technocratic class that continues to make the trains run on time. And despite some ups and downs in Thailand’s political and military relationships with its major partners, economically Thailand’s major trading and investment relationships have remained relatively intact. I think that’s partly because of the sense that technocrats are running that side of things in Thailand, and secondly that investors have now had a long time to price in political risk in Thailand because it’s hardly new.

It’s true that having the king pass away raises new uncertainty, maybe even a higher level that existed previously, but anybody who was really skittish about political risk in Thailand has had a lot of time to think about it has probably already adjusted its investment strategy. So I don’t think we’ll see a rush to the exit. The king’s passing has been expected for quite a long time, and I think that risk has been priced in by most of Thailand’s commercial partners.

If there’s something precipitous that happens — like a major spike in violence — that would change the calculation. But if what we continue to see jockeying among political elites over who will have the upper hand in the next round of elections, I don’t think that’s going to have a bust effect on the Thai economy.