30-Year Throwback: What Fodor's Was Saying About China Three Decades Ago 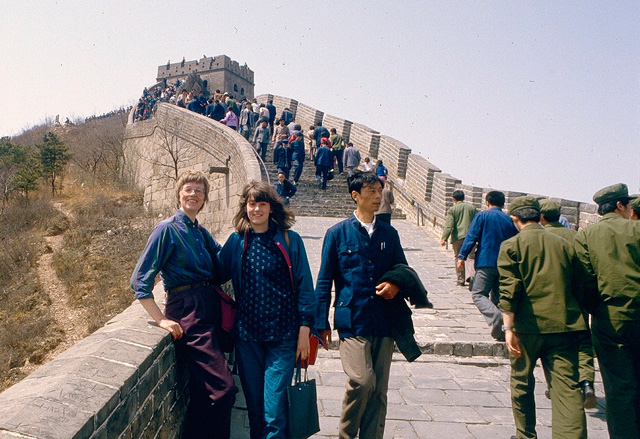 Two foreign tourists at the Great Wall of China circa 1984. (kattebelletje/Flickr)

When asked to give examples of China's miraculous growth and transformation over the last three decades, you may first be tempted to cite year-to-year GDP growth figures, search for images of "Beijing air pollution" on Google, or point at extravagant luxury redevelopment projects like Shanghai's exclusive Xintiandi district.

Yet in 2013, we may also find some of these answers tucked inside an outdated Fodor's People's Republic of China guidebook from 1984.

The guidebook is anachronistic, but not necessarily obsolete. Upon a quick skim, you may pick up some juxtapositions between 1980s China and 2010s China that shed light on the realities of a rapidly-changing society. We made a note of some (but not all) of the quotes from the travel guide that seem somewhat laughable today, as well as some timeless tips for foreigners traveling to China. Afterwards, we checked in with Orville Schell, a longtime traveler to China and director of the Center on U.S.-China Relations at Asia Society, who verified that the handpicked quotes below from the 1984 guidebook sounded about right.

Here's our conclusion: in the face of an ever-changing Chinese society, we are certain that 30 years down the road people will discover irrelevant (or otherwise inaccurate) travel tips inside a 2013 edition travel guide, too. For now, we present to you a throwback to 1984.

"It is illegal to take Chinese currency out of China, but it can be exchanged at the currency checkpoint on departure providing your currency documentation is in order." (p. 29)

While it is unclear whether this ban on renminbi (RMB) leaving China is still technically in effect, it's evident that this policy is no longer enforced at airports. Moreover, there is no longer a "currency documentation" that foreigners in China must fill out upon arrival and departure.

"You need have no fear about money dealings with the Chinese. They are always scrupulously honest, and will follow you out of the shop to return a couple of coins if you happen to leave them on a counter." (p. 30)

Unfortunately this is no longer represents the experience of a majority of foreigners in China. It's no secret that foreigners are especially prone to scams, ripoffs, and other cheap money dealings in China. This does not, however, imply that you will not encounter many scrupulously honest Chinese people during your travels in 2013.

"Pay for all goods and services in restaurants, hotels and shops catering exclusively to foreigners in 'foreigners' banknotes,' called 'foreign exchange certificates.' You obtain this form of banknote when exchanging travelers' checks, drafts, or foreign currencies at branches of the Bank of China." (p. 30)

This special form of payment no longer exists today. Foreigners pay for goods and services using RMB, just as locals do.

"There is no nightlife in China of the type usually known to foreign tourists. Indeed, there are only a few bars in the whole of China, found in the major hotels." (p. 32)

Nightlife has gained traction among the younger generation over the years. While it is true to some degree that nightlife in China today is concentrated in areas with sizable expatriate communities (which is now a handful of Chinese cities), I must add that I once stumbled upon a nightclub in the outskirts of a monastic mountain town in Qinghai Province frequented by young to middle-aged ethnic Tibetans. It goes without saying that bars are now rampant in "international" cities like Shanghai.

"Bargaining is almost never done, although some polite bargaining in the form of a gentle suggestion about a 'price adjustment' is now tried sometimes in antique shops and some other stores." (p. 35)

Bargaining has become a way of life in contemporary China. Foreigners, too, should feel encouraged to bargain respectfully with independent vendors at markets and road-side businesses whenever appropriate. It is a great way to practice Chinese and interact with locals on a more intimate level.

"The urban dweller spends much of his life in a factory or workshop." (p. 63)

China's adoption of a socialist market economy has given way to more diverse industries and increasingly stratified socioeconomic classes. Urban dwellers as we know them are no longer relegated to either a factory or workshop, although factory workers and workshop laborers constitute a large share of the urban labor market.

"Some foreign readers will be familiar with the Xinhua Agency Blue News, a newssheet highlighting selected selected international reports. When you are visiting China you can arrange for your hotel to deliver this each day, and it is one way of keeping up with some international events. Xinhua also publishes the Red News, which reports local and world events according to the vision of the Central Committee and is couched in extravagant and heavy prose." (p. 72)

"When you visit schools, factories, communes, or theatres, the local people may clap as you arrive. It is polite to clap in return, and you will quickly find that this is a very pleasant exchange." (p. 92)

This probably will not happen in 2013 unless you're Kobe Bryant or Justin Bieber.

And here's what hasn't really changed since 1984:

Meals are still very inexpensive for American travelers in China. Unless you're living like a king, you should only have to budget a fraction of what you spend on meals in the States during your stay in China. The saturation of Western eateries and high-end restaurants over recent years, however, means that prices are going up as a whole. Not to mention that the U.S. dollar has been sliding against the RMB since 2005. Moreover, you may quickly discover that eating out is much cheaper than cooking for yourself.

"Tap water is generally not safe to drink, so you should take care only to drink (and brush your teeth with) the boiled water that is placed in the carafe in your room." (p. 34)

Thirty years later, we still find no exception to this important health precaution. Boiling water is still standard practice as neither local residents nor foreign travelers are immune to the potable tap water issue in China.

"If you do come down with a gastric complaint and wish to maintain your schedule, you should carry a supply of the local toilet paper with you, since bathrooms are not always well equipped." (p. 39)

On a related health note, free toilet paper still seems to be in short supply across the nation, whether you find yourself in a pit in the countryside or a modern shopping mall in the city.

Can you confirm the veracity of any of the Fodor's guide's observations, then or now? Share your thoughts and experiences in the comment box below!