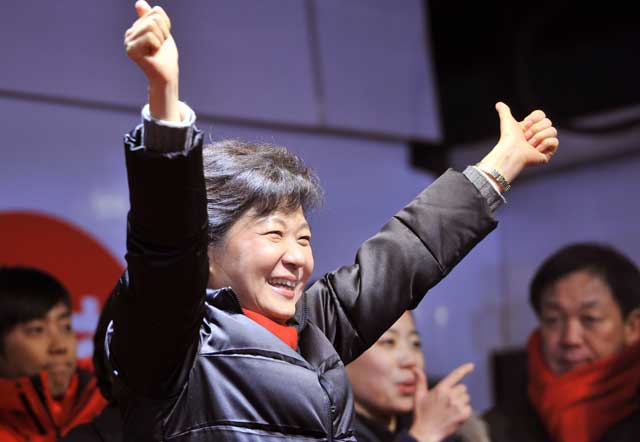 Next year will be the year of dynastic leadership on the Korean peninsula, and the offspring on both sides of the 38th parallel have to make the best out of the baggage their fathers left for them. They can choose to look back and call forth the ghosts of their dads or look forward and forge their own priorities and a practical vision for economic reforms and peace on the peninsula.

What may surprise many about the two new leaders heading into 2013 is that they have more in common than meets the eye. The newly elected president of South Korea, Park Geun-hye, was elected on December 18 with a full accounting of votes confirming her ascension on December 19. Likewise, North Korea's Kim Jong Un ascended to power on December 19 a year earlier, upon the public release of news that his father, Kim Jong Il, had died.

The two leaders are separated by the 38th parallel, a military face-off, and a generational gap. Park is 60 years of age, while Kim is in his late 20s. In Kim's case, his identity as the son of the "Dear Leader" and the grandson of the "Great Leader," Kim Il Sung, the scion of the Kim dynasty and the foundational figure of the Democratic People's Republic of Korea, is essential to his political legitimacy. In Park's case, the ancestral legacy is more politically complicated and ambiguous. She inherits the gratitude and pride for economic development that many South Koreans attribute to the focused and ambitious policies of her father, former general-turned-president Park Chung Hee. His administration pulled the country out of war-torn devastation, poverty and military threats from Communist North Korea during the 1960s and 1970s.

But Father Park exacted a high cost: thousands of political prisoners who were detained arbitrarily, tortured, and even executed without fair trials. During his rule, the economy soared, but the political and civic life of Koreans went underground and went lacking: no freedom of speech, information, assembly, or rule of law. South Korea in the 1970s was reviled in the West, including the United States, as one of the worst human rights violators and hardline authoritarian states during a time when authoritarianism was in vogue in much of Asia, Latin America and Africa.

Of course, today, the world continues to think of human rights abuses and lack of democracy when "Korea" is mentioned. But the reference is to North Korea, where lack of freedom abounds and detention and punishment for minor to major violations of political order and loyalty dictated by the regime are often the norm.

Park Geun-hye and Kim Jong Un inherited their respective paternal legacies at inopportune times. Both Park Chung Hee and Kim Il Sung had worked economic miracles on both sides of the 38th parallel during the '60s and '70s — until the early 1970s, the North was ahead of the South on many economic indicators. But by the late 1990s, both Koreas were in economic shambles. The North was mired in a collapsed economic system, including the public distribution of food and other necessities, and reeling from several years of famine-induced deprivation. The South was in distress as the Asian financial crisis struck Korea and generated corporate failures, unemployment, the plunging value of the national currency, psychological humiliation and personal tragedies.

Park Geun-hye began her climb to political power at that time, riding on the rehabilitated image of her father. Park Chung Hee began to rise from the dead as South Koreans trembled with insecurity and fear and longed for strong leadership and renewed economic growth and stability.

In 2013, focused political consolidation and advancement of political legitimacy are imperatives for Park and Kim. Kim has had a head start, but barely. The first anniversary of his ascent to power coincides with Park's election and inauguration, but there is no more clarity about Kim's hold on power and command over the governing apparatus than several months ago. In the South, Park Geun-hye must contend with and win over at least a significant portion of the liberal and younger generation of Koreans who voted for her opponent. He raked in almost 50 percent of the popular vote and will not disappear. The opposition will remain vigilant and ready to criticize and block Park's proposals and actions unless she learns to compromise and gain their respect, if not trust. This would be a utopian task in a South Korean political arena that sometimes resembles a dogfight.

Both leaders also need to gather smart and loyal advisors. Kim has done better on this than one might have expected, given his lack of experience and youth. He has let go of old-guard military leaders and begun to appeal to the better educated and "technocratic" group of elites. There is no certainty about how open Kim might be to new ideas and differing opinions.

Park, meanwhile, is known to keep a small retinue of advisors who are mostly "yes men." She slaps down even loyal followers who hold ideas different from hers or step out of line in any way. Even among her supporters, there is worry about the availability of top-notch people who would be willing or able to work with her. Or conversely, whom Park might be able to work with.

On foreign policy, Park and Kim are mutually tied to each other by North Korea's nuclear program. South Korea's lame-duck president, Lee Myung Bak, tried to untie the nuclear cord with the North. He let North Korea flail on its own and promised to disown Pyongyang until and unless it gave up nuclear weapons development and promised to behave "nicely" to the South. But his successor, Park, has promised to re-engage the North and to delink humanitarian aid from politics. How she can pursue re-engagement in a manner that satisfies both the hardline conservatives who supported her and the hardline liberals who revile her remains in question.

Kim Il Sung and Park Chung Hee were archrivals, but they also shared something in common: love of the Korean nation. Of course, they had different visions and views about the fit between governing structures and the people. Park Geun-hye has repeated during her campaign that her motivation is love of nation and the happiness of South Koreans.

Will the two dynastic offspring across the 38th be able to fulfill love of nation and the happiness of the Korean people through competition or cooperation? 2013 will surely reveal more of the answer.

Katharine H.S. Moon is the Edith Stix Wasserman Professor of Asian Studies in the Department of Political Science at Wellesley College. She is an Asia Society Associate Fellow.