Between Yogis and Gurus, It May be Time to Get Smart | Asia Society Skip to main content

Between Yogis and Gurus, It May be Time to Get Smart 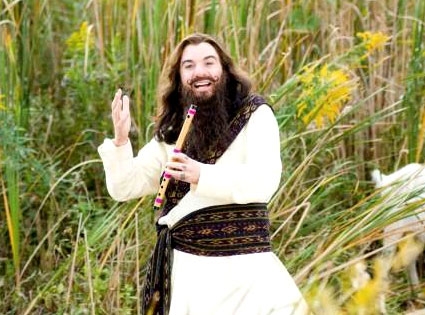 I think I know where Mike Myers got his inspiration for The Love Guru, opening June 20 in theatres nationwide. My parents owned an LP when I was growing up they used to play for the immigrant Indians who congregated every weekend in our suburban Los Angeles home. It would invariably set the assembled company laughing so hard, they’d be crying, the women helplessly shaking their shoulders and wiping their tears with the pallu of their saris, the men clapping each other on the back. This is something the new Mike Myers film fails, according to most of the advance reports from the critics, to do. But I haven’t seen the movie yet.

The LP my parents and their friends found so funny was called The Mashuganishi Yogi, a clear send-up of the real Maharishi Mahesh Yogi, then at the height of his fame in America by his association with the Beatles and their trip to Rishikesh. The album was released exactly forty years ago in 1968. The Mashuganishi (from the Yiddish word for “crazy”) Yogi was performed by American comedian Joey Foreman, a guy out of the finest Borsht-Belt tradition who made it big as an opening act for Mickey Rooney. The album was produced under the auspices of the Bill Dana Comedy Theater. As I recall, though I could be wrong about this detail, Foreman had performed his Yogi routine on one of my parents’ favorite television shows, Rowan and Martin’s Laugh-In, which is how they knew about the recording.

Particularly relevant to The Love Guru is the second riff on the album “The Mashuganishi on Love.” Hmm. I wish I had a copy of the LP (and a turntable to play it on) so that I could really do a comparison but my suspicion is there may well be some similarities with the grand theme, if not the specific jokes, in The Love Guru.

There are, of course, some differences as well. The Mashuganishi Yogi featured an American white male comic masquerading as an Indian holy man. The Love Guru features a Canadian white male comic masquerading as an American who grew up in India and became an Indian holy man. That’s at least one more layer, or maybe two, of identity confusion. We could also split hairs and note the difference between a yogi, someone who has achieved a high level of mental and spiritual discipline through the practice of yoga, and a guru, or teacher. Though it should be pointed out one does not exclude the other.

Here’s the album cover of The Mashuganishi Yogi.   I actually recognized it the second I found it on Google (where else?), where I also found this text associated with the cover image: “After being forced to listen to the Yogi for more than an hour, Bill prepares to commit “hari krisnha kari” by impaling himself with his sitar...”. This alone gives a pretty good idea of the kind of humor on the album itself. I actually remember (and I was barely born in 1968, maybe even I remember this prenatally, or perhaps from a previous life) something about “gazing at a navel with a noodle in it” which we all found hysterically funny (you’d have to have been there).

The other big comedy movie opening this weekend is Get Smart, a show that was also very popular with my family in the 1960s. Of course, that was during the height of the Cold War when making fun of spooks was a good way of relieving our anxiety that the Soviets were, at any moment, about to blow us away with nuclear weapons. This was the same anxiety that made Indian spirituality, making love not war, and all the rest extremely attractive at the time. It was a big year, 1968, what with the war in Vietnam escalating and students in the streets of Paris digging up the cobblestones to hurl at police. We all needed some comic relief.

Interestingly enough, according to his Wikipedia entry, Joey Foreman also appeared in two Get Smart episodes, not as an Indian yogi but as a Chinese man called Harry Hoo. Coincidence or karma? You decide.

The differences aside, the obvious similarities between these two American comic narratives parodying Indian spirituality beg a question about the perception of India in the United States. Has it really changed that much in forty years? Has the IT revolution and India’s growth story and the increasingly active and visible Indian-American community really changed fundamental American perceptions about India? It is encouraging that there are Indian-origin actors in The Love Guru, including Ben Kingsley and Manu Narayan. Deepak Chopra actually plays himself. Frankly, though, I think this is far too serious a question to ask of such a frivolous movie. The whole conceit is so intentionally silly, audiences are not going to confuse Mike Meyer’s India with the real India or his Guru Pitka with a real guru any sooner than back in the ‘60s we confused the Mashuganishi Yogi with a real Hindu holy man.

The more fundamental question may be when Mike Myers will move beyond his flower-power phase, which some of us thought was over after Austin Powers. Back in the real 1960s, the release of The Mashuganishi Yogi marked the beginning of the end of that era. Maybe The Love Guru will have the same effect on Myer’s faux 1960s. Or maybe not. If The Love Guru bombs at the box office this weekend, it will be in part because Get Smart does well. What with a new Cold War looming and lots of television series from that era that still haven’t been remade as contemporary feature films, we may be stuck in ‘60s redux for a while.

Mira Kamdar is a Bernard Schwartz Fellow at the Asia Society and the author of Planet India: The Turbulent Rise of the Largest Democracy and the Future of Our World.