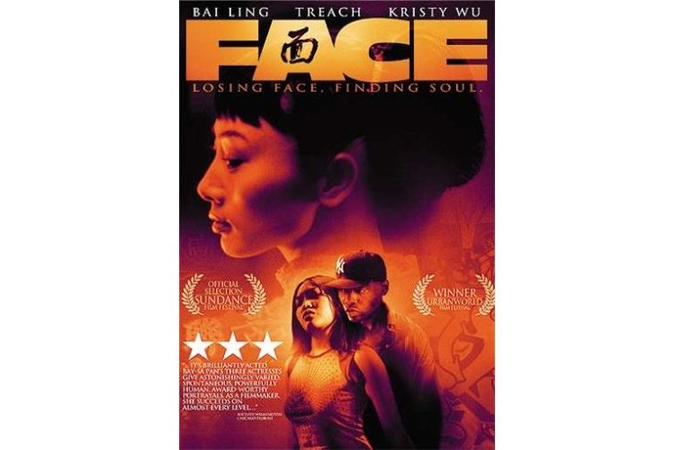 Face is the story of three generations of women trying to reconcile conflicting cultures of their traditional heritage and the surrounding influences of American life. Kim, played by Bai Ling, is a young woman living in Queens during the 1970s, battling the expectations of her traditional Chinese mother (Kieu Chinh). After she is raped and impregnated by a reckless, rich playboy (Will Yun Lee), she is pressured into marrying him and bearing his child. Not being able to stand the unhappy marriage, Kim decides to flee, leaving her infant daughter in her mother's care. Years later, in the 1990s she returns and unleashes three generations' worth of resentment and misunderstanding in the family. Kim's independent daughter Genie (Kristy Wu) resists spending time with her mother after feeling abandoned by her. In the midst of her family turmoil, Genie finds love and solice in a relationship with a black DJ Michael (Treach), sparking another conflict with her loving, yet inflexible, grandmother.

Asia Society spoke with Pan about both the challenges and joys of making Face.

Can you explain how you developed the story of Face?

I started writing Face in my screenwriting class at Columbia film school. It was originally inspired by a good friend's experiences, but six years and almost 20 drafts later, it just evolved into a whole different story shaped by these particular characters in the movie.

You are the producer, screenwriter and director of Face. What were your biggest challenges in each of these roles?

As a producer, I thought the hardest part was raising the budget, which took five years, and the last batch of money didn't even come in till we were already in the editing room. But once the movie was made, and even after all the good fortune of premiering splashily at Sundance and all the accolades, awards and praises, it was still extremely hard to get through all the trials and tribulations and finally see the movie released theatrically.

Having gone through these last three years as the producer for Face, I would have to say, comparatively speaking, screenwriting and directing are more like an ongoing vacation rather than any challenge whatsoever!

As a screenwriter, I think the biggest challenge is to stay disciplined and focused to keep at it. I was fortunate to have a much more experienced screenwriter, Oren Moverman (Jesus' Son, and the upcoming Daddy Cool) team up with me and it made the process a lot easier. After 10 drafts on my own, with the different time periods and all these characters from different generations, it was getting hard to figure out who was the protagonist, whose story it was, whose relationships to follow, from whose point of view; and then there were times I guess in hindsight when things would get a little too close to home. I would lose objectivity in terms of telling the story fairly and giving the details necessary for the movie to be complete. So that was another challenge - although you have to be compassionate to the story and the characters you are portraying, you also have to stay objective in order to tell a more well-rounded story.

As for directing, that's really my favorite part, as well as the role I feel most comfortable in. I can honestly say I loved every detail, every aspect, every task that came with directing this movie, and none of it ever felt like "challenges" that I did not enjoy going through.

Face was originally a short film. Can you explain how it came to be a feature?

I started writing the feature-length screenplay in my writing class at Columbia. When it came time to graduate, since my concentration was directing, I need to make a thesis film, so I figured I'd segment out of the feature script a short with its own beginning middle and end and make it my graduating thesis film. It was a 17-minute short which was fortunate enough to receive the "Polo Ralph Lauren Award for Best Screenplay," "The Directors Guild Award for Best Asian-American Student Filmmaker," and a few other awards at various film festivals around the world. The short kind of helped put me on the map to get the feature process rolling. But unfortunately since I only had 33 pages of my feature script when the short was getting all the attention, it took another few years to finally get the feature off the ground.

You tackle issues confronting three generations of Chinese women. Did you have specific goals when creating the characters of these three women?

I don't think I actually set out any concrete goals for any character in particular, though I would like to think that every character in the film - male or female - had to be as real to me as possible, and that like all real human beings, they had likable traits and unlikable traits, they had certain great qualities as well as unavoidable flaws. Hopefully despite the hardships they experience in life, they don't lose their sense of humor; and despite all being victims of circumstances, they don't come off as flat-out, one-dimensional "victims." Most importantly, despite some of the unforgivable things they may have said or done, at the end of the day they are still sympathetic to the audiences because they can relate to them.

You address the problems associated with an interracial romance between a young Chinese American woman and an African American man. Do you hope your film will help and battle racism in the Asian American community?

I wouldn't dare be so presumptuous nor self-important to say that my film can help change any racism in the Asian American community, or any community for that matter. But I would like to hopefully show that as human beings, we're not all that different no matter what kind of cultural, racial, social, religious, or educational backgrounds we come from. The struggles we have, whether it's identity issues, finding love, seeking approval, familial ties, self protective mechanisms, etc. are all quite similar no matter where you come from. I've had people come up to me ranging from African Americans, male and female, older Jewish folks, Italian teenagers who barely spoke a word of English, Brazilians when we showed in Rio de Janeiro, even a Caucasian gay male, etc. --- all telling me how this was their life story! It was very bizarre, but also immensely heart-warming and rewarding to hear.

Will Yun Lee, who plays Daniel in the film, said in an interview, "Directing is an art and Bertha has it." What do you think are the elements in the art of directing? Do you think you have a particular style?

Will has been extremely generous and supportive on top of being an amazing actor to work with. I can only speak for myself as a director, and to me, every little detail to telling the story, inviting audiences into the character's world is important. Making sure the script is as good as it can possibly get before even starting pre-production is the most important. I have learned, unfortunately, that if it ain't there in the script, you ain't gonna be able to fix it in post-production!

Choosing the cast wisely is important and knowing how to work with actors is extremely important to me. I had an acting teacher who once said, "Forget about all the acting methods and schools and text books, it's all about human behavior. If you're gonna study acting , study psychology." It's always been very important to me to know each character's psychology, as well as understand the psychology of each actor who is portraying these characters. Everybody is different, and knowing how to work with each individual differently in order to bring the best out of them, or, at least get what you are trying to accomplish, takes careful observation of psychology.

Storyboarding is extremely important. Film is a collaborative medium, it takes hundreds of people from beginning to end to execute this vision and tell the particular story. So any preparation work I can do ahead of time to make sure the communication and execution can be as clear and as precise as possible, I try to do - whether it's a short film, this feature, or music video. The colors, textures, even the smells of each setting coming off screen, the music, all those details are important to me.

I think selecting your creative collaborators is also extremely important. I have been so lucky on Face with my co-writer Oren, co-producers Derrick Tseng and Jonathan Shoemaker, DP John Inwood, production designer Teressa Mastropierro, editor Gary Levy, sound designer Steve Borne. They all are great personalities to be around, they had so much to offer with their experience, their professionalism and their immense talents, but were always respectful and supportive of my role as the director at the same time. I feel that as a director, being as clear about your vision as possible is important, but surrounding yourself with the best collaborators you can find and being open and flexible to what they can offer can only bring your material onto a whole other level you may not even have imagined on your own.

Do you think that there are aspects of Asian culture that make "saving face" particularly important?

I don't know if it's more particular in Asian culture than others, and I can't say I'm all that familiar with other Asian cultures other than my own, which is Chinese. But I think Chinese culture definitely has a deep-rooted emphasis on this concept of "face," like putting up a good fight for the bill at the end of a meal even when you have no money in your pocket. I think the constant emphasis on "saving face" also often prevents us from being more honest and direct with how we express ourselves. And that's what I was trying to show in Face - all these people, who may all come from good intentions, but because of this concept of "face" - whether it's due to cultural, social, or racial influences, but sometimes even just from their own stubborness or dumb pride, they don't say what they really mean, express how they really feel or go after what they truly desire. The film shows the consequences of this kind of miscommunication and how it can effect generations. However, I must say on an artistic level, the more restrained and repressed means of expressions definitely make more interesting and complex communication whether it's on screen or in the form of music lyrics or poetry, etc.

The whole process of getting this movie made to getting it in theaters has all been so challenging. It's just such a hard industry. I have so many friends and colleagues who are trying to get movies made with white or black casts, some are even hugely famous or have enjoyed many successes in the past, but it's still hard. I also know a lot of movies that went to Sundance with non-Asian stories, which received many big awards, yet never see theatrical distribution at the end of the day.

So I guess from my personal experience, since I've yet to pursue a non-Asian American story, I don't know how to make that comparison. But I feel extremely blessed with all that I've received so far, and I'm very much looking forward to the theatrical opening of Face here in NYC. Thanks to organizations and enthusiastic supporters for giving me the opportunity to spread the word. I hope audiences all across the board will somehow be moved and entertained with the experience, and maybe with some decent box office and good word-of-mouth from all different types of audiences, it will make my next movie, in which the main characters all happen to be Chinese Americans again, a little easier to get made and get seen.