The analysis is part of The China Dashboard, an online, interactive tool designed by ASPI and RHG. The dashboard, updated quarterly, tracks China’s progress toward its reform agenda unveiled at the Third Plenum meeting of China’s leadership in November 2013. The assessment is based on economic and environmental indicators, reflecting measurable outcomes rather than stated policies.

“The 19th Communist Party Congress last fall emphasized continuity above all else,” said Dan Rosen, a partner at the Rhodium Group and the Jack Wadsworth Fellow at ASPI. “Expectations for reform are being steered down, and foreign governments are revising their responses in turn.”

The bulk of Chinese reform priorities — 8 out of 10 areas of the Dashboard — show little or no forward movement. 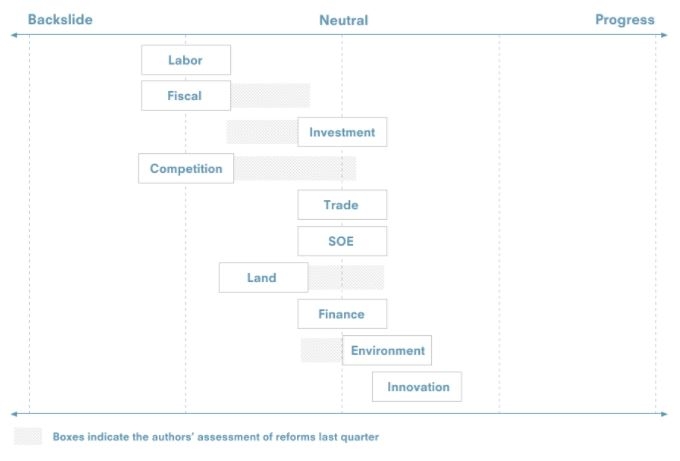 "China faces a long-term economic growth dilemma,” said Kevin Rudd, president of the Asia Society Policy Institute. “It can continue to generate quantitative growth based on older policy settings of highly leveraged, highly protected state-owned enterprises (SOEs), or it can move to new policy directions, already announced five years ago, to deleverage and unleash private, competitive, outward-looking, innovation-based firms to underpin sustainable growth for the future. So far the signals remain at best negative to mixed according to our most recent economic reform barometer."

China achieved some success in its reform agenda in two key areas. First, it has lifted the share of its national output from innovation-oriented industries. The weight of innovative industries as a share of all industrial sector value-added (IVA) in China continued a trend of steady growth led by the automotive sector, reaching a new peak in 3Q2017.

The second area of progress is the environment. Measures of air quality have continued to improve, and while water quality has gotten worse, that outcome can be attributed to short-term weather conditions. With overall environmental enforcement being meaningfully stepped up, air quality should continue a positive trend, and be joined by water in the near future.

In four economic reform clusters there was evidence of backward movement:

1. Competition policy: Merger reviews as a percentage of total mergers for foreign-involved and domestic transactions.

Measures of local fiscal gaps improved slightly, but with mandated fiscal expenditures still at 144% of total revenue, this picture is still slipping backward despite central government pledges to fix the fiscal balance. There is a clear need for significant reform to China’s fiscal regime, given high local government debt levels paired with mandates to deliver growth and satisfy social spending obligations.

Less protected migrant workers saw their wage growth rate lag below GDP growth for the sixth consecutive quarter. Wages for China’s 180 million migrants, who make up 20% of the country’s workforce, went up 5.2% after inflation, while the overall economy they supported grew at 6.8%. In other words, migrant workers are not benefiting from growth.

Four other areas of reform delivered mixed results or held at a standstill:

The ratio of cross-border capital flows to GDP slightly recovered in the second and third quarters, but remained well below pre-2017 levels. The ratio was 6.2% in the first three quarters of 2017, well below the 8% to 9% average of recent years. China remains minimally engaged on the broader globalization dimension of cross-border capital flows. It has been deeply cautious in opening its financial accounts.

China’s capital output ratio (QuICOR) is very high, reflecting low investment efficiency. The ratio was 6.98 on a four-quarter moving average (4qma) basis in the third quarter, down slightly from 7.04 previously. This improvement is insufficient to mitigate risk. Financial efficiency remains far from normal.

The composite index stands in neutral, indicating no discernable increase in Chinese imports of highly protected products. Implementation of trade liberalization plans in services – such as easing foreign investment caps in financial services – is a future possibility, but not a current reality. Newly announced tariff cuts on imports of certain consumer goods, such as pharmaceuticals and cosmetics, are encouraging.

Seen through the lens of state share of revenue from listed firms, SOE reform made no real progress this quarter. The share of revenue captured by listed SOEs in “normal” industries – those that Beijing has identified as suitable to market competition – held constant.

The next quarterly update of the China economic dashboard will be available in April.

For 60 years, the Asia Society has sought to explain the diversity of Asia to the United States and the complexity of the United States to Asia, and to be a bridge in problem-solving within the region and between Asia and the wider world. With a problem-solving mandate, the Asia Society Policy Institute builds on this mission by tackling major policy challenges confronting the Asia-Pacific in security, prosperity, sustainability, and the development of common norms and values for the region. Its most recent major policy reports include Shifting Trade Winds: U.S. Bilateralism and Asia-Pacific Economic Integration and Northeast Asia and the Next Generation of Carbon Market Cooperation.