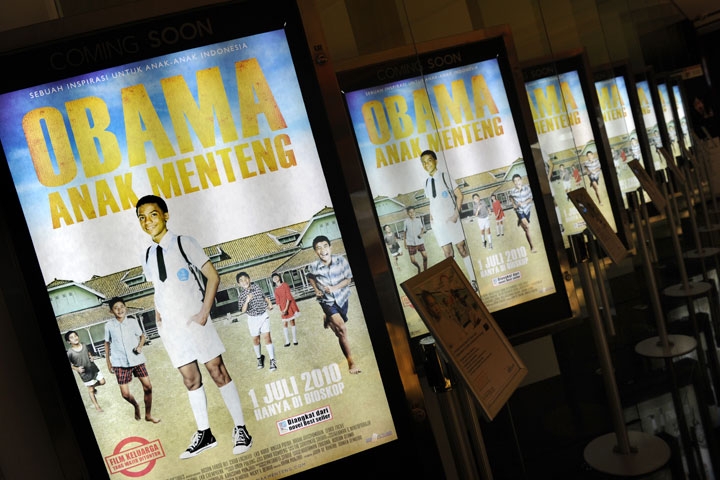 The movie Little Obama is based on the book by Damien Dematra. It was directed by John De Rantau and recounts US President Barack Obama's childhood days in Indonesia. The setting is Menteng Atas, Jakarta, where Obama lived between 1967 and 1971, a period when President Sukarno had just been ousted after substantial bloodshed and Suharto was tentatively rebuilding the country before he failed it many years later.

Barack Obama came to Indonesia at the age of six with his mother, Stanley Ann Dunham, and Indonesian stepfather, Lolo Soetoro. Little Obama (or Obama Anak Menteng, the film's Indonesian title) tells the story of a young African-American child's struggle for acceptance in a society where he is quite different from his peers. Producers say the story is about 60 percent fact and 40 percent fiction.

I read reviews of this movie on American websites just before finalizing this piece. And so, I must start with a disclaimer. This is not a balanced review, but a defense of a highly contextual presentation. Not only contextual in content, but in relation to the different audiences to which it will be exposed. Clearly it is not for reviewers who can't tell the difference between the Indonesian and the Polish flags (both a red and white). Nor will it be liked by those who do not appreciate the international goodwill Barack Obama has created single-handedly in a country that has been disenchanted with America for quite a while, not just the eight years prior to his inauguration.

But before I start the review, let me hark back to the real-life story of Obama's childhood as told in his book Dreams From My Father. As an Indonesian who has watched American-Indonesian relations throughout my life, I regard the book as the most sensitive account of Indonesia during the transition from Sukarno to Suharto in the late 1960s and early 1970s. It is far more vivid that any political writer, American or Indonesian, has written about that unique period in our nation's history. It also tells the story of Obama's Indonesian experience better than any movie ever could, because all the drama is in his mind and the country and not in any scenes that make up a gripping movie.

In the current setting, the Obama story is sitting in the middle of two ignorant groups, Indonesian ones who insist on depicting the US as an international oppressor without regard to the positive changes in Washington, and Americans, who are not interested in understanding the effect of Indonesian childhood to a US President elected by a landslide.

The story of Barack Obama's childhood in Menteng, Jakarta, could very well be the biggest real-life story ever shared by the US and Indonesia. Obama spent less than four years in Indonesia, but those were some of the most formative years in a boy's life. I know, I was in Europe between 8 to 12 and Europe gave me a sense of belonging to the societies that accepted me. Barry Soetoro (as Barack Obama was called then where he assumed his stepfather's surname) faced problems of acceptance. He was physically and culturally different from his peers back then, but he adjusted well.

The film doesn't show the sensitivities of his adjustment as well as Obama's book Dreams From My Father. But for those not familiar with the Obama story, it offers a decent impression of his trials and tribulations and ultimate victory. Many inaccuracies make the movie a rich target for those who concentrate on detail, which could have been avoided had the producers not aimed for a deadline set by President Obama's June visit, which was cancelled at the last minute.

Obama went through a childhood challenged by changes in parents and geographical settings. These factors made him into somewhat of an outsider. The alienation of his childhood did not stop when Obama left Indonesia for the United States. Living with a multi-ethnic, multicultural background, he overcame the challenges and ultimately made his pluralistic experiences into his major strength. In that sense, Obama is important for Indonesia. We are quickly finding that we too have a heritage of pluralism. It was a major message from one of our presidents, the late Abdurrahman Wahid, who also had a remarkable and varied childhood.

Find the maturity of an adult within a child, and you will find the optimism of a child within the adult. This is the nuanced message imbedded in the movie. It cannot be found without a sympathetic bias toward the improvement of American-Indonesian relations. Maybe it will be too unrealistic to expect general outside audiences to pick up on this. So maybe the movie should be kept in Indonesia where people are proud of Obama and of a country that overcame great challenges to find hope in positive action.

Wimar Witoelar is a commentator, writer, and TV host in Indonesia. He was also a spokesman for and an aide to Abdurrahman Wahid, who was Indonesia's president from 1999 to 2001. A version of this review is available here.