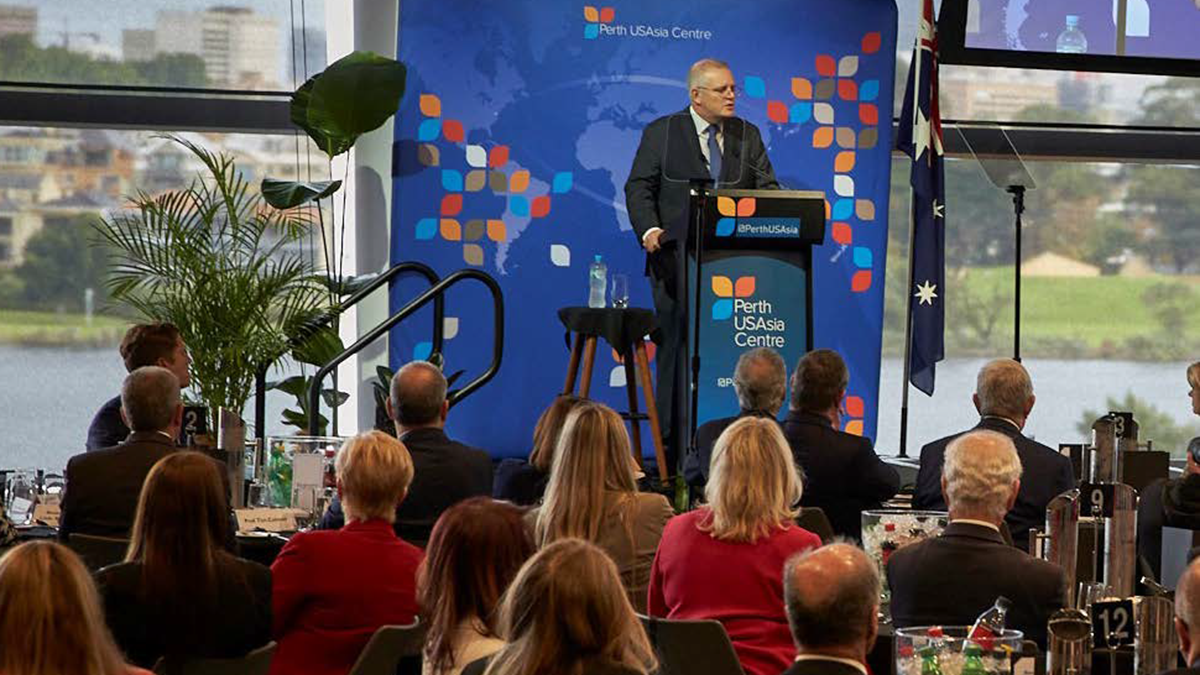 Prime Minister Morrison’s 9 June speech to the Perth USAsia Centre is another forcible reminder of how significantly Australian foreign policy is being re-fashioned to meet the demands of a radically changed world.

A transformation is underway, one that pushes Australian foreign policy (and many domestic policies) ever further from the foundations of our post-Cold War international engagement.

Morrison’s speech, and subsequent short remarks in the Senate on 15 June by Foreign Minister Marise Payne, are the government’s clearest attempt yet to re-conceptualise Australia’s highest priority foreign policy tasks into a digestible list.

It is too early to know whether these objectives will be used consistently in the future as high-level organising principles for foreign policy, updating the 2017 Foreign Policy White Paper’s own set of “five objectives of fundamental importance to Australia’s security and prosperity”.

Either way, they encapsulate an unfolding diplomatic agenda now increasingly dominated by just two foreign policy “super challenges” – dealing with authoritarian, nationalist China and its punitive diplomacy, and the immense human and economic toll of the pandemic.

Australia’s desire to work with others to balance China’s power in the Indo-Pacific is more evident than ever in government speeches and policy. Morrison has been urging like-minded nations to act “more cohesively, more consistently, more often” to push back against China’s zero-sum diplomacy since at least August last year.

In the brutal contest for power and influence in the region, the government seeks space for Australia – economic, political, strategic. In Morrison’s words in Perth, a region in which Australia can “be who we are” without fear of coercion.

The government wants to bolster the deterrence capability of the Australian Defence Force by making it more lethal at greater range. The agenda to harden Australia domestically against cyber threats, foreign interference and disinformation rolls on.

Economically, Morrison and his team remain attached to the ideal of “openness”, not least as a juxtaposition to autocratic China. But openness is now caveated by the need to protect national economic sovereignty against future supply chain disruptions and the security and economic risks that come with China’s dominance of many critical industries.

Priorities for “better targeted” Australian engagement in the multilateral system reflect the importance the government places on recovery from the pandemic, building resilience to future global shocks, and responding to China’s coercion and challenge to liberal norms.

The government now emphasises rules to “protect sovereignty and curb excessive use of power”, along with support for human rights and the rule of law.

Informed by the early pandemic failures of the World Health Organisation, Australia now advocates more forcibly for effective and accountable international institutions that can operate free from Chinese interference.

Even reform of the World Trade Organization (WTO) is no longer just about reinforcing rules-based processes for managing technical disagreements, but re-investing in a potentially important mechanism for deterring China’s arbitrary trade sanctions.

Democracy: We are for it

Morrison’s Perth speech is perhaps most striking for its emphasis on values as a driver of Australian foreign policy. Even for a speech aimed at the G7, words like “liberal”, “values” and “democracy” are heavily salted through the text.

The elevation of liberalism and democracy as underpinning values for Australian foreign policy has been under way for some years now, with the government doubling down on the 2017 Foreign Policy White Paper’s quiet confidence in liberal values and emphasis on cooperation
with fellow democracies.

Values already sit at the heart of a far-reaching and consequential policy agenda to defend and bolster liberal norms. These battles are mostly conducted without much media attention and in forums far from Australia.

Australia opposes, for example, China’s attempts to shift attention (and accountability) in the international system away from political and social human rights, towards the provision of other rights, such as economic development.

And values now inform Australia’s approach to technology fracture points between democracies and autocracies, including the way the internet should work, misinformation and disinformation, cyber-attacks, protection of data, the ethical use of AI, and broader technology standards.

Even so, while values are driving - as and not just informing - large components of Australian foreign policy these days, Morrison’s speech does push Australia into the “competition of systems” zone that increasingly shapes the diplomacy of the Biden Administration.

The global forces and national interests propelling Australian foreign policy in this direction are powerful.

As Tom Wright has argued, the old international order has come apart and “two broad constellations of countries are emerging in its place – one consisting of democracies, the other autocrats”.

The more Beijing exports its insecurities – in the form of global disinformation campaigns, cyber-attacks, foreign interference, manic attempts to control the “truth” about China and zero-sum, often coercive diplomacy – the more Australia and others should and will emphasise democracy, sovereignty and rules-based order.

Nor is it tenable for Western liberalism to ignore the systemic abuses of power and suppression of individual rights embedded in Xi’s merciless autocracy.

A global alliance bridging North America, Asia and Europe to defend democracy and push back against Chinese coercion, even a loose and uneven one, is striking new territory for Australian foreign policy.

But it’s easy to see why policy makers grappling with a deteriorating external environment and the inability – so far – of existing diplomatic tools to convince China it to dial back its zero-sum diplomacy would be attracted to it. Opportunity lurks even in chaos.

In part this does not matter. We won’t ever reach agreement with China, or at least today’s China, on issues like human rights, foreign interference and disinformation.

But some of the change in the multilateral system that Australia advocates for requires working with China. This is so, for example, in relation to reform of the World Trade Organization. The same applies to other global challenges, like climate change, or even better managing the next pandemic.

To date, the government largely has been silent on how the necessary and inevitable push back against Chinese revisionism and rule-breaking might work alongside equally necessary cooperative activities in the multilateral system.

This is a tension the Biden Administration more clearly acknowledges, even if it too is uncertain how to make it all work.

Second, Australia cannot be certain how much constraining power a democratic bloc might have on China, let alone what effect such cooperation would have on the hard realities of economic and military power in Asia.

Nor can we be sure of the durability of such a bloc. The current alignment of interests between major democracies is in part structural: China’s behaviour is pushing like-minded countries closer together.

But this a fragile dynamic. The renewed trans-Atlantic concord on internationalism informed by liberal values won’t survive if Donald Trump or a Trump-like candidate wins the next US election on a nationalist “America First” platform.

A Republican Party working even now to undermine the integrity of America’s electoral democracy is more likely to embolden autocrats than unite global democracies.

In short, Australia can’t neglect other partners or institutions as it works more closely in groups of democracies.

Third, neither the United States nor Australia can compete in Southeast Asia – a region slowly being pulled closer to China – on a values platform alone: the region wants to be engaged and valued in its own right, and is utterly disinterested in a competition of systems.

Morrison’s speech sparked a vigorous and useful debate on this point.

Mike Green, the doyen of Asia scholar-practitioners in the United States, believes the Biden framework has enough flexibility to accommodate this tension, and that demonstrating the “common bonds” among democracies and a shared opposition to coercion and aggression will reinforce “stability in ways that matter to the security of all”.

Others argue that in the Indo-Pacific America must “shift its mindset from competition between systems to competition for influence”.

In practice, it should be possible both to seize the moment of global democratic alignment and compete effectively in Southeast Asia: it requires a disciplined, inclusive narrative tailored for the region, supported by determined engagement focussed on urgent needs.

Morrison and Payne seem aware of the potential trap, arguing that the government’s agenda to work more closely with others in the Indo-Pacific is as much about “like-minded” countries operating together as it is about democracies.

Morrison made this point in Perth (albeit not until the question-and-answer session, singling out Australia’s blossoming relationship with Vietnam as a case in point). Payne similarly has said Australia has an “inclusive and practical diplomatic approach”.

Still, too many speeches like the one in Perth will drown this delicate positioning.

The Government already has an alternative narrative in the region but needs to use this more consistently, and with greater depth and definition.

The focus must be less on shared values and more on “shared principles” on which cooperation in the Indo-Pacific should be based. These will include respect for national sovereignty, the peaceful settlement of disputes, non-use of coercion and respect for international law, especially in the UN Convention on the Law of the Sea.

The right narrative needs to be matched with more of the patient, long-term work that will build Australia’s influence, diversify trade and forge genuine partnerships in developing Asia.

The means stepped up efforts to fight the deadly COVID surge now ripping through many countries and supporting the hard, long-term work of rebuilding economies.

Cooperative mechanisms like the Quad, important as they are, can complement but not substitute for this direct, bilateral diplomacy.

The government can rightly claim some significant policy achievements. The aid program has been re-geared to COVID priorities and Australia is now a substantial funder and provider of vaccines for the region.

But much of our diplomacy is still done on a modest budget. Prime Ministerial and ministerial attention on Asia, especially Southeast Asia, waxes and wanes. Dropping into Singapore is not the same as engaging the region. Australian direct investment in developing Asia remains low.

The uptick in China’s already strong influence in Southeast Asia through the pandemic is a reminder of the scale of the challenge. Australia doesn’t have the luxury of down days.

Nor does the United States, which has looked distracted and disinterested in recent months, even if the Administration promises there is better to come.

Finally, Biden understands the answer to his call to arms lies inside democracies as much as it does in competition with autocracies.

Western liberalism must tend to its own ailments – economic inequality, the balance between community and individual rights, pointless culture wars, the devaluing of truth, and the corrosive effects of identity politics and political polarisation.

So too in Australia. “Demonstrating that liberal democracies work” requires Australia to rediscover its capacity for significant economic and social policy reform.

It requires the government to defend and protect tolerance and pluralism at home, including when the loyalties of Chinese Australians are being unfairly questioned by its own members.

And Australia needs to find more creative ways to support human rights, free speech and the protection of individuals from tyranny in our region. We could start with tougher sanctions on the generals who are destroying Myanmar.

This essay first appeared on the Perth USAsia Centre's website on 17 July 2021. You can view and download a PDF version of this essay here.