A shared maritime destiny for Australia, Indonesia and the Philippines | Asia Society Skip to main content

A shared maritime destiny for Australia, Indonesia and the Philippines 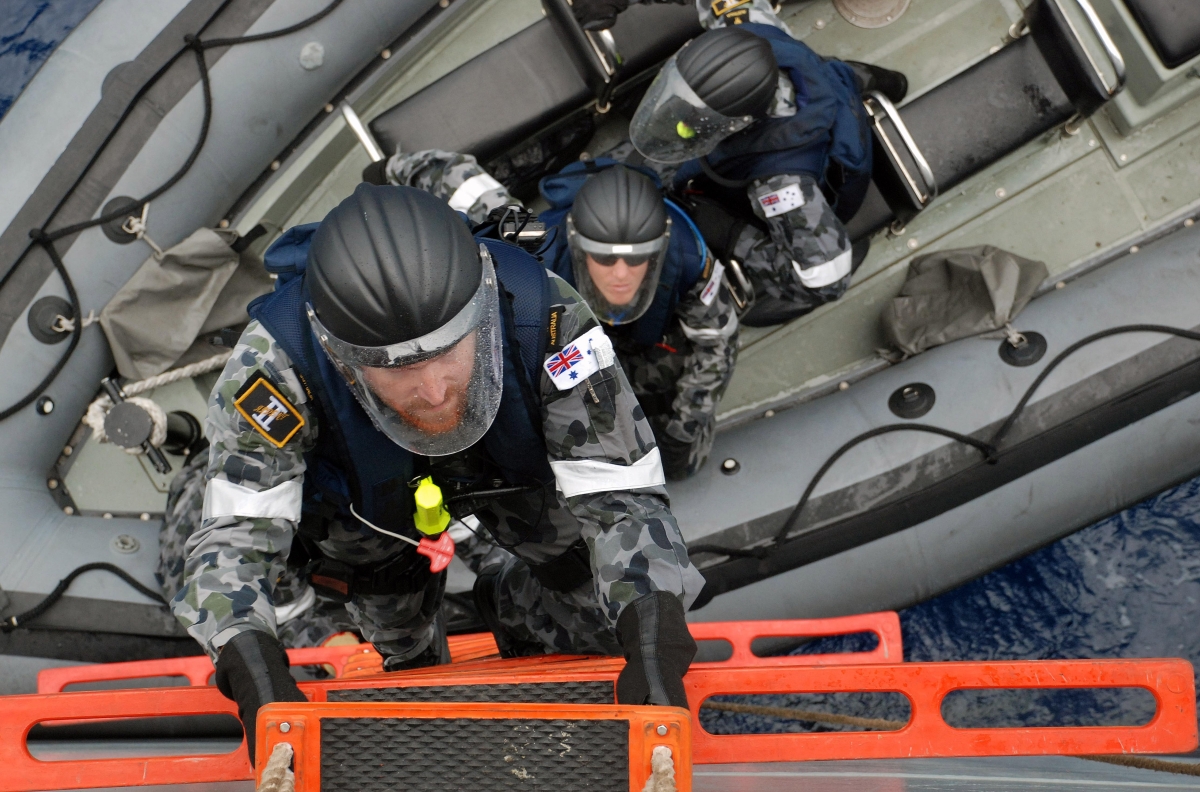 Australia, Indonesia and the Philippines are natural partners in promoting security and preserving stability in the maritime domains of their shared region.

“In the seas, we will triumph,” declared Indonesia’s President Joko “Jokowi” Widodo at the close of his inauguration speech in October 2014. But four years on, even the world’s largest archipelago — the most naturally inclined to a confident maritime outlook — has made only modest progress in achieving Jokowi’s Global Maritime Fulcrum vision.

The Indo-Pacific region is unwieldy, with its criss-crossing security arrangements and diverse state capacities. But it is inevitably the dominant strategic construct incorporated into the thinking and outlook of regional governments, particularly Australia and Indonesia. Maximising the opportunities for security cooperation in the context of the Indo-Pacific, set against the backdrop of changing regional power relations, is the sine qua non of present-day strategic policy.

Dividing the vast Indo-Pacific into sub-groups, alongside large-scale multilateral efforts, is a pragmatic way of building common modes of cooperation and a common sense of identity between its constituents. Building on pre-existing bilateral cooperation, strategic triangles are apt building blocks of the future landscape.

While the Indo-Pacific’s geographic boundaries remain fuzzy, it is conversely clear that Australia, Indonesia and the Philippines belong within its strategic confines. Between Australia, Indonesia and the Philippines, there are a multitude of issues and areas to invest greater efforts, but what bring these states together, especially when they fail to share a maritime border?

We need to take the idea of shared destiny beyond rhetoric — it is the reality. As far as national interests can make a compelling case for trilateral engagement, to work as a team is to recognise a shared destiny. As the adage goes, there’s no “I” in team but there is undoubtedly one in failure.

In the Indo-Pacific century, strategic power is dynamic; as former Indonesian foreign minister Marty Natalegawa argues, it shifts from one pole to another. Power concentration in one capital can be at the detriment of many others. The exploitation of resources such as fishing stocks is a loss for the group, the coercive grab for territory in the South China Sea is an assault on the agreed norms. Norms might not be perfect but they are better than a pure self-help system.

And so, while bilateral cooperation between Australia and Indonesia, Indonesia and the Philippines, and (increasingly so) the Philippines and Australia is occurring, engaging all three states in the pursuit of maritime issues should be a top priority for strategic thinkers.

South-East Asia’s two largest states with one of ASEAN’s most important regional partners makes a formidable trio in maritime affairs. An ambitious way of building cooperation between them is to promote the obvious: all three countries are, in fact, middle-sized, democratic maritime nations in close proximity.

A deeper consciousness of all three states of their maritime responsibilities can have a transformative effect. Admittedly a long-term undertaking, fostering a maritime consciousness within a population, building a robust maritime sector, boosting collective regional responsibility for the marine environment and maritime security.

A national maritime identity fosters a sense of responsibility for maritime issues among the people who will grow to expect accountability in their governments for failures. Far from being a utopian dream, particularly in democracies, the media plays an important role in bringing maritime issues to the fore.

In the Philippines, broadcaster GMA News aired footage in June purportedly showing Filipino fishermen watching helplessly as the Chinese Coast Guard seized part of their catch from the Scarborough Shoal. One fisherman interviewed tearfully decried, “Are we slaves of China?” The heart-wrenching report made national headlines. A survey released by Pulse Asia the following month, which marked the second anniversary of the Arbitral Court’s ruling, showed that 73 per cent of Philippines citizens polled wanted President Rodrigo Duterte to enforce their country’s rights under the award.

It is not merely a philosophical sleight of hand that we can band together Australia, Indonesia and the Philippines; as democratic maritime countries creating a south to northwest arc of the Indo-Pacific, it is almost as if nature intended for them to be maritime sentinels.

Connecting with the maritime identity of each nation is to inevitably recognise that maritime challenges have shared origins and necessarily collective solutions. The trials of oceanic pollution, maritime piracy, people smuggling and maritime disputes irrefutably connect the Indo-Pacific’s inhabitants — more so in cases of proximity.

While building national maritime consciousness is a long-term project, in the strategic realm, there are clear, immediate steps which could foster a maritime trio. The first is to focus existing dialogues and interfaces between all three countries predominantly on maritime matters. In defence and strategic matters, that makes the most sense given the overlapping interests between the three concern maritime disputes, maritime-borne illegal activity including people smuggling and foreign fighter movements, maritime-related terrorism and piracy, and marine environmental protection.

Although the first Philippines–Australia Dialogue was convened in 1997, track 1.5 and track 2 dialogues between the two have gained momentum in the past few years, with think tank analysts, scholars and foreign affairs officials meeting in Manila in 2017 and again this year. In Australia, one easy way might be for think tanks and universities to invite Indonesian observers to existing bilateral track 1.5 and track 2 meetings with the Philippines and Philippines observers to the same with Indonesia.

To move them beyond a talk shop, these dialogues can be utilised to help reach a basic consensus on maritime priorities and thus build opportunities for research collaboration but also maritime civilian and defence industry cooperation between all three countries. All three states are involved in ship-building, with Indonesia’s national shipbuilder PT PAL expanding into other markets after successfully manufacturing Strategic Sealift Vessels (SSVs) for the Philippines. Keeping these priorities alive in the media and in policy circles is a key responsibility of the strategic and business communities.

The meeting of senior officials in June between the so-called Quad states (Australia, India, Japan and the United States), held on the sidelines of an ASEAN senior officials meeting, opens the door for these kinds of meetings regionally. An Australia–Indonesia–Philippines senior officials’ strategic dialogue would provide the opportunity to discuss matters such as President Duterte’s recently announced “red lines” on Chinese behaviour in the South China Sea. Another top priority is counter terrorism cooperation, building on the Australian Defence Minister’s Sub-regional Defence Ministers’ Meeting on Counterterrorism, involving six South-East Asian states, held in Perth last year. With regular senior officials’ meetings to build momentum and familiarity, the Australian Defence Minister’s initiative could the ideal forum for future trilateral sideline gatherings.

Once strategic-level priorities are set, operational level trust must be deepened. All three militaries and their civilian agencies have long-standing ties and, despite a heavy land focus, are natural maritime partners.

Developments between navies has gathered momentum. The inaugural Navy-to-Navy Strategy talks between Australia and the Philippines were held in March 2017, co-chaired by the Deputy Chief of the Royal Australian Navy and the Vice Commander of the Philippine Navy. Navy-to-navy talks could extend an invitation to naval attaches. Forums such as the Western Pacific Naval Symposium where all three naval chiefs are present are optimal times for trilateral talks. Developments such as the Code for Unplanned Encounters at Sea include Australia, Indonesia and the Philippines, and while voluntary in nature, continued socialisation of such agreements at trilateral meetings can strengthen their normative nature.

But how do we move cooperation from table tops to the tides? Critically, information sharing will help combat traditional and non-traditional maritime-related issues such as piracy, illegal fishing and people smuggling. At last year’s ASEAN summit in Manila in November, Prime Minister Turnbull signalled his willingness to share more intelligence with the Philippines on terrorism groups in its borders.

The upgrading of maritime assets in all three countries is opportune for building early habits of cooperation with new platforms. Like Indonesia, the Philippines seeks to modernise its defence capabilities which has included upgrades to its air force and navy. The Philippines Armed Forces are also set to benefit from a boost in Pentagon funding for a fleet of drones used in monitoring operations against groups aligned with ISIS. In terms of training, Exercise Lumbas between the Australian and the Philippines navies, which focusses on maritime security including anti-terrorism, might in future be augmented to include Indonesian contingents.

Surveying the strategic horizon, Australia, Indonesia and the Philippines are highly unlikely to have matters that cause direct antagonism between them. Events such as the 1999 crisis in East Timor, which brought Australian and Indonesian troops close to the brink of combat, were contained due to trust at multiple levels of command delivered by years of persistence and familiarity between personnel. Present day cooperation will not only reap dividends for fostering a shared sense of responsibility and pooling resources, but develop the trust needed
in times of crises.

What is likely is the need for coordination and cooperation in times of natural disaster, underscored by the recent earthquakes in Lombok and typhoons in the Philippines such as 2013’s Typhoon Yolanda. Visits such as the HMAS Adelaide to Indonesia and the Philippines as part of Indo-Pacific Endeavour 2017 can help promote international engagement focussed on humanitarian assistance cooperation.

As the relationship between Australia and the Philippines gains a higher profile with increased cooperation over Marawi, there has been greater scrutiny on Duterte’s human rights record.

Last year, the Australian director of Human Rights Watch Elaine Pearson called on then Australian Prime Minister Turnbull to “plainly and publicly condemn extrajudicial killings in the Philippines to ensure both Duterte and the Filipino people are clear about where the Australian government stands.”

While the full generational impact of the extra-judicial killings on Philippines society and its police force is yet to be felt, cooperation between militaries and civilian agencies remains robust and largely isolated from these domestic policies for now. Australia maintains overall a steady relationship with the current administration. During HMAS Adelaide’s stop in Manila in September last year President Duterte was greeted aboard by the Chief of Defence Force and Australian Ambassador in an important diplomatic gesture.

Nevertheless, as partners, Australia and Indonesia can be involved in supporting what Imelda Deinla and Rory MacNeil have flagged as a priority: an “effective and accountable security sector” in the Philippines.

Trilateralism is not to the exclusion of bilateral or multilateral cooperation; the idea is to form “building blocks” for a more complex structure, fortified for more complex challenges that demand shared solutions.

It is undeniable that Australia, Indonesia and the Philippines are natural partners in working to promote security and preserve stability in the maritime environs, as well as protect the marine environment. More than most South-East Asian states, Indonesia and the Philippines depend on the sea. Aside from building ties with South-East Asia’s middle powers, growing closer to these two helps Australia anchor its identity in the region, diversifying it away from its Commonwealth roots (manifest through the Five Power Defence Arrangement).

In October 1997, in launching the inaugural Philippine–Australia Dialogue in Manila, then Foreign Minister Alexander Downer underscored the need for a “new, more dynamic bilateral relationship.” Perhaps it is time for a new, more dynamic trilateral configuration where maritime nations join forces to the Indo-Pacific community’s greater benefit, and together, in the seas, we will triumph.

Natalie Sambhi is a Research Fellow at the Perth USAsia Centre.