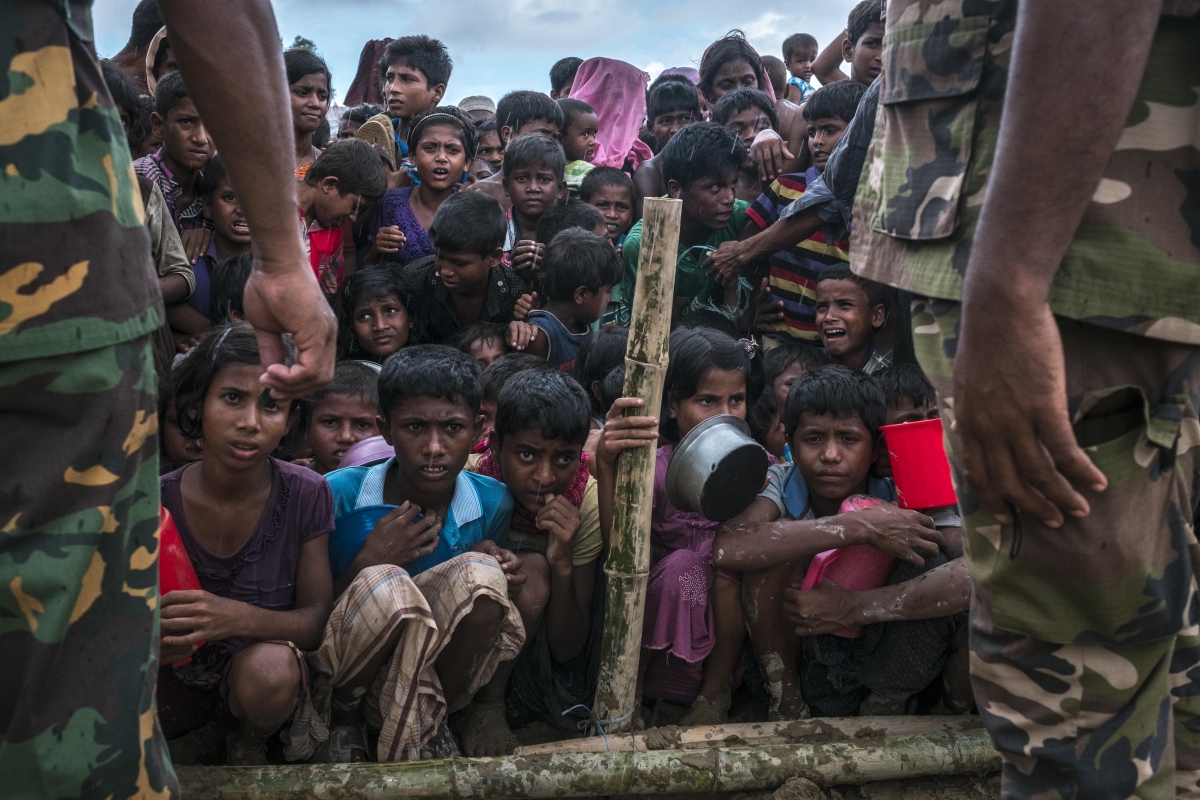 The violence in Rakhine State should be addressed with deep engagement rather than isolation.

ASEAN and Australia are facing a long diplomatic challenge – how to adequately respond to the precarious situation in northern Rakhine State where hundreds of thousands of Rohingya have been displaced, or fled to Bangladesh.

Three major factors have converged that make the Rakhine State crisis a particularly difficult affair: mass disenfranchisement; mass violence and displacement; and the alleged threat of terrorism. The region must carefully consider all three factors in order to take an informed and constructive approach to diplomatic relations with Myanmar. This requires the regional community to remain engaged with Myanmar, rather than take the high road of detachment.

The crisis has deep historic roots

The extreme difficulties faced by the Rohingya in Myanmar can be traced back to Ne Win’s socialist regime and the subsequent military regime’s policy on citizenship. Mass displacement in northern Rakhine State occurred in the 1970s and again in the 1990s. The discriminatory implementation of the Citizenship Law in the 1990s also contributed to the weakening of political inclusion.

In 2012, large scale conflict broke out in northern Rakhine State, and eventually spread to affect many other Muslims across Myanmar. Houses were burned and tens of thousands displaced.

In 2015, we witnessed a dire change in official government policy – the removal of the right to vote, or the right to run for political office, of temporary card holders (known then as ‘white cards’). The impact of this policy change was the mass disenfranchisement of white card holders, a population of over one million, most of whom are Rohingya.

The reason this policy change was so distressing is because white card holders were permitted to vote in the 2010 elections. So there was historical precedent to justify them voting in the 2015 elections. This was overlooked. This is not necessarily to suggest that the right to vote is substantive, but it did symbolise a thread of connection to the state.

Another reason the loss of the right to vote provoked anxiety was because the travesty of mass disenfranchisement was largely ignored amidst the celebrations of the vote in favour of the National League for Democracy (NLD). The international community was captivated by the NLD’s success as a triumph of democracy over military rule. Yet is it really democracy if one million people are disenfranchised and excluded from the political community in the process?

One of the few people to publicly disagree with the NLD in the lead up to the 2015 elections was U Ko Ni, a legal advocate who was assassinated one year ago. He was appalled that the NLD caved to the anti-Muslim campaign that was used by its opponents to try and discredit the party and its chances of winning. For U Ko Ni, this was not a free and fair election. Democracy was deeply compromised. We should not have been surprised that worse was to come.

One feature that distinguishes the current conflict in northern Rakhine State since 2016 is the alleged claims of terrorism. We need to put this claim in context. Almost every major ethnic group in Myanmar has an army. Armed conflict has been the norm for decades.

Ethnic armed groups have been given a privileged place in the ongoing peace process. The Rohingya have not had an active armed group in recent years until now. Armed organisations in northern Rakhine State have not been invited to negotiate a peace deal with the military. The Rohingya have no seat at the table today in the historic Panglong Peace Process led by Suu Kyi.

Instead, the new Arakan Rohingya Salvation Army (ARSA) has been declared by the government as a terrorist organisation. It is important to note that the declaration itself appears to be plagued with rule of law irregularities. The decision was made on August 26, 2017, and yet in November 2017, local newspapers announced that the government Anti-Terrorism Committee met for the first time.

There are also major deficiencies in the Anti-Terrorism Law itself. For example, the death penalty is attached to some offences under the law. In addition, the Anti-Terrorism Committee benefits from blanket immunity clauses for its members, as well as for the military.

Last year was the first time a group has been declared a terrorist organisation under the new Anti-Terrorism Law. Some of ARSA’s tactics are not necessarily different from those used previously by either the military or other armed ethnic groups. The decision to label ARSA a terrorist organisation is one of convenience, while radical Buddhists, the military and the police escape this label.

The third major factor is the alarmingly swift and high level of displacement in northern Rakhine State. Prior to August 2017, 120,000 Rohingya lived in internally displaced camps. Since August 2017, over 650,000 people have fled to Bangladesh, constituting the largest displacement of people in the region in recent history. One estimate suggests that at least 6,700 Rohingya died during the military offensive in northern Rakhine State.

Disturbing reports have emerged of a seriously disproportionate response by the military. The military’s tactics mirror its past practices against other armed groups: forcing people to flee their villages; burning entire villages; violence; rape; murder; laying landmines to prevent return; and the use of acid so that victims cannot be identified.

Despite the grave humanitarian crisis affecting a large number of women, children and the elderly, these facts receive little sympathy in Myanmar. Even activist cartoonists who were against the previous military regime have instead been publishing cartoons that are pointedly anti-Rohingya.

Like many controversies today, the Rohingya crisis has been exacerbated by online media.

Anti-Rohingya sentiment in fact increased on Burmese social media after the military crackdown.

While violence and displacement has occurred in the past, the present crisis is on a scale that has not been seen before in northern Rakhine State. It demands an extraordinary and sustained response.

The state in Myanmar is represented by two people today – Suu Kyi as de facto head of the government, and Senior General Min Aung Hlaing as Commander in Chief of the military. While Suu Kyi leads the majority NLD government, the military has seats in parliament, a substantial presence in government administration, and an indirect influence over the courts. This means the response to the crisis in northern Rakhine State requires cooperation and agreement between these two groups.

In 2016, Suu Kyi did take the initiative of inviting Kofi Annan to chair a committee to investigate the situation in Rakhine State. This initiative was unpopular domestically, with some arguing that this constituted foreign interference. In August 2017, the Annan Report was released. It contains a long list of hard-hitting recommendations across a broad range of sectors: health, education, citizenship, freedom of movement, security and tourism. These recommendations did not receive sufficient attention because attacks by the ARSA occurred around the time the report was released.

The government needs to be continually reminded of and held to account for these recommendations. However, without the cooperation and goodwill of both Suu Kyi’s civilian government and the Commander-in-Chief’s military administration, it will struggle to fulfil the recommendations in the Report.

On its own, the NLD-led government cannot fulfil these social, political and economic goals. Suu Kyi and the NLD do need to provide the moral leadership necessary to change dominant public perceptions on this issue.

Suu Kyi is an elected member of parliament and the holder of not one but three positions: Minister for Foreign Affairs, Minister for the President’s Office and State Counsellor. She is seen both within and outside the country as the de-facto leader of the government. Combined with her family legacy in Burma’s independence, and her status as a former political prisoner, she has credibility and a strong domestic basis on which to lead on this issue.

The NLD should try to bring the Rohingya symbolically within the state. There is past precedent for this. The military-led USDP government entered an alliance with some Rohingya in northern Rakhine State for the 2010 elections. The NLD needs to consider adopting such a strategy for the 2020 elections. This would go some way to bringing the Rohingya back into the political community of Myanmar.

Myanmar is a challenge to ASEAN’s diplomacy

Under decades of military rule, Myanmar presented a challenge for ASEAN. Myanmar joined ASEAN in 1997, but did not chair ASEAN until 2014. There are good reasons for Australia and ASEAN to stay closely engaged with Myanmar.

Unlike other countries in the region such as Thailand, Singapore, Indonesia and Malaysia, the state in Myanmar is unable to offer its people even basic levels of education, healthcare or other services. This generation has virtually no experience of democracy. Its people have been kept in extreme isolation for decades. During these decades of isolation, its people have been fed lies of exclusive ethnic nationalism. Reversing this situation will require sustained outside engagement.

Suu Kyi is the main point of engagement for ASEAN and Australia. In her position as State Counsellor, she is leading the civilian government response to the Rakhine State crisis.

In doing so, ASEAN and Australia must engage genuinely, rather than primarily for domestic political gain or to deflect public attention away from unsavory domestic political crises. For example, the Indonesian Foreign Minister did not earn a seat on the latest Rakhine Advisory Body despite being the first to visit Myanmar after the 2017 attacks. Neither did Malaysia secure a representative, in part because the prior government was trying to deflect public attention away from the 1MDB scandal. Instead, the Myanmar government appointed Surakirat Sathirathai, the former Thai Foreign Minister, as the chair of the new Rakhine Advisory Body.

There are a range of obvious points of engagement. ASEAN and Australia must provide long-term humanitarian assistance. There is no quick fix to this crisis. The monsoon season will significantly affect the lives and health of many who are currently displaced. Resettlement, if it happens, will be a slow process and on its own will not guarantee reintegration into society.

The case of northern Rakhine State presents a confronting crisis of mass conflict and displacement; mass disenfranchisement; and distorted perceptions of terrorism. In addition to measures by the international community, these pressing issues need to be addressed by the region through informed diplomacy and deep engagement.

Dr Melissa Crouch is a Senior Lecturer in the Law Faculty, University of New South Wales.

This essay was first published in the Disruptive Asia ASEANSpecial Edition in March 2018.