Reversing the boats: a humane response to a regional dilemma | Asia Society Skip to main content

Reversing the boats: a humane response to a regional dilemma 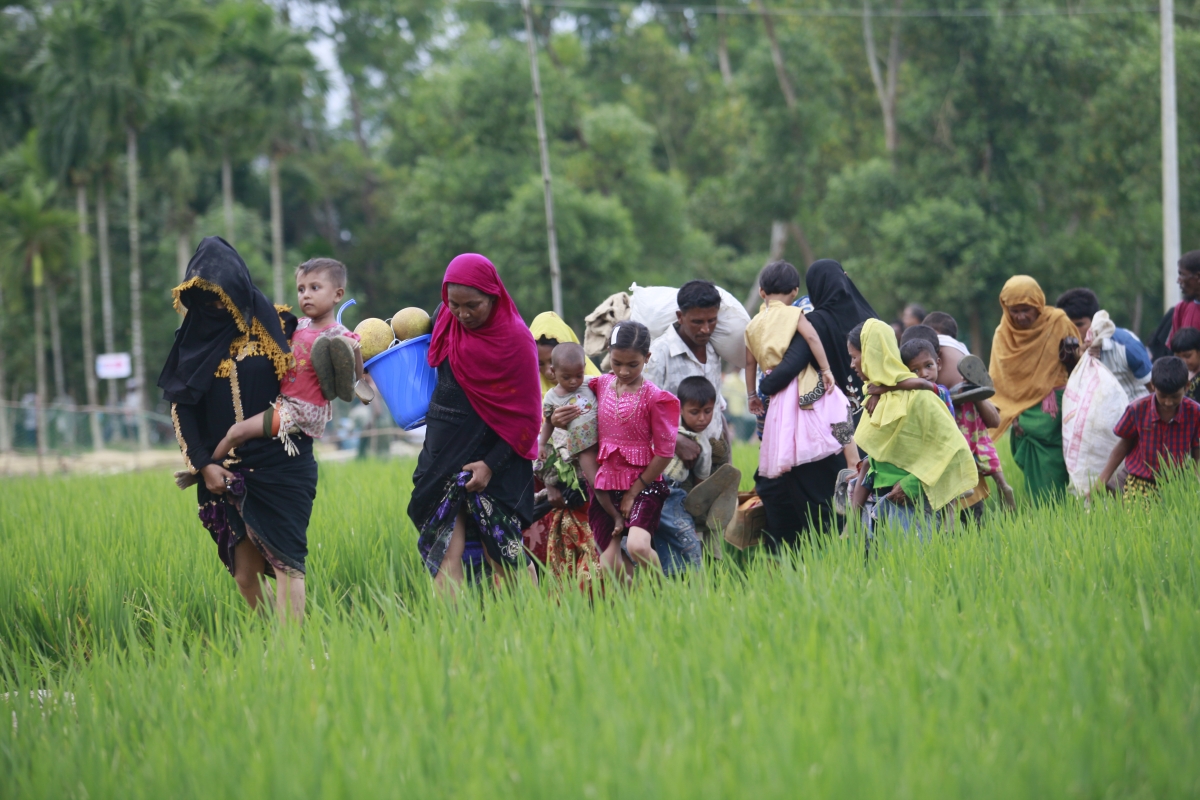 In January 2018 the United Nations High Commission for Refugees (UNHCR) projected that South-East Asia would host 2,627,957 ‘people of concern’, including 481,069 asylum seekers, refugees and similar people. Given that the same projection also reported that between August 2017 and November 2017 600,000 Rohingyas had crossed the border into Bangladesh fleeing violence in Myanmar, the projection seemed somewhat incongruous.

Most refugees in the South-East Asia region originate from Myanmar from conflicts in Kachin and the Shan states, as well as Rakhine State. In June UNHCR estimated that there were 886,778 refugees in Bangladesh with 720,849 of them having arrived from Myanmar since August 2017. At the end of March there were 155,880 asylum seekers and refugees registered with UNHCR in Malaysia, including 135,740 from Myanmar. Thailand has hosted Myanmar refugees for three decades with 97,496 mostly Myanmarese refugees living in nine camps in May. There are also about 6000 asylum seekers and refugees from a range of countries in Thailand’s urban areas. Indonesia also hosts 14,000 UNHCR registered refugees from Myanmar and other countries.

Since nationhood, Australia has been obsessed with maintaining absolute immigration and border control. Even in the context of dealing with asylum seekers, this is the primary policy objective. However, not all its policies in relation to asylum seekers are entirely explicable by reference to this primary policy objective. Australia also desires to perceive itself and be perceived by others as a country which upholds humanitarian values and honours its international obligations.

Australia’s immigration and border control activities take place not only at Australia’s territorial borders but also within them and very far outside them. The Joint Agency Task Force to implement the Abbott government’s 2013 Operation Sovereign Borders (OSB) involves 15 government agencies and is divided into three task groups: the detention and removals task group and the detection, interception and transfer task group, both led by the Australian Border Force, and the disruption and deterrence task group led by the Australian Federal Police.

According to Senate Estimates figures, between September 18, 2013 and January 31, 2017, 65 people smuggling ventures involving 2186 people were disrupted prior to departure. Indonesia, Malaysia and Sri Lanka seem to be the countries in which the most disruptions occur. Many of these disruptions involved intelligence or other cooperation on the part of Australian officials.

OSB also involves the turn back of unauthorised maritime arrivals to the transit country they most recently departed (usually Indonesia) or, in the case, of those arriving directly from their country of origin, hand back to country of origin authorities. In theory, an exception is made for those found in a screening interview to have prima facie protection claims. Unauthorised maritime arrivals screened-in are supposed to be taken to a regional processing country (i.e. Nauru or Papua New Guinea) instead of being turned back or handed back. Between the commencement of OSB and May 21, 2018, 800 people on 32 boats had been intercepted at sea. However, only two of these people had been screened in – both in 2014.

Australia’s main counter when criticized about its treatment of asylum seekers and refugees is to point to its offshore Refugee and Humanitarian Program. There are 18,750 resettlement places in the 2018-19 program, though this is regarded as a ceiling figure rather than a target figure. The fact that the program exists at all is evidence that Australia does endeavor to give effect to humanitarian values. However, the fact that the selection criteria are not exclusively focused on applicants’ needs but also have regard to their integration potential is evidence that self-interest also figures strongly in Australia’s calculations.

In 2014, the Australian government signed a four-year agreement with Cambodia for the voluntary resettlement in Cambodia of unauthorised maritime arrivals sent to Nauru and subsequently recognized as refugees by that country. Australia pledged an additional $40 million development assistance to Cambodia.

The Cambodian example illustrates how Australia uses its aid budget to advance its national interest in the refugee field even though aid as a percentage of Gross National Income (GNI) is on a downward trajectory. Since the commencement of the Rohingya exodus to Bangladesh in August 2017, Australia has announced initiatives to assist Bangladesh and Myanmar to deal with the crisis costing $51.5 million. Australia’s response to the crisis does, of course, promote humanitarian values. However, it is primarily directed at advancing Australia’s immigration and border control agenda by supporting a very sizable displaced population to remain in their country of origin or first asylum instead of moving further afield.

The member countries of ASEAN view the irregular movement of people through the region as undesirable for economic, social and national security reasons. For the most part, their individual and collective policy responses are directed at controlling such movement rather than addressing humanitarian needs. The Plan of Action to Implement the ASEAN-Australia Strategic Partnership (2015-2019) takes the same approach to irregular movement.

The Bali Process on People Smuggling, Trafficking in Persons and Related Transnational Crime was inaugurated at a conference co-chaired by Australia and Indonesia in February 2002. Forty-five states and territories in the wider Asia-Pacific region are members.

In 2016, Bali Process Ministers adopted the legally non-binding Bali Declaration on People Smuggling, Trafficking in Persons, and Related Transnational Crime. It included paragraphs encouraging the protection of asylum seekers and refugees. In September 2017 the Bali Process Steering Committee (consisting of Australia, Indonesia, Thailand, New Zealand, UNHCR and the International Organisation for Migration) triggered a consultation mechanism in response to the outflow of Rohingyas from Myanmar. Senior officials of Bangladesh, Myanmar and Steering Committee members had a confidential meeting in Jakarta in October at which they agreed to continue to engage in non-public dialogue on the issue. The non-public nature of the consultations means that outsiders remain in ignorance of what, if any, follow up meetings have taken place, what the policy outcomes have been or, for that matter, what the participants’ policy objectives are.

Asylum seekers and refugees in South-East Asia are regarded primarily as an immigration and border control challenge by countries in the region and by Australia. Since September 2013, the central plank of the present Australian government’s response has been the implementation of Operation Sovereign Borders (OSB). It has been a success in terms of achieving the Australian government’s primary objective, but it has been at the expense of honouring Australia’s international obligations and humanitarian values. Even the responses to forced displacement which the Australian government labels as ‘humanitarian’ prioritise the achievement of immigration and border control objectives over humanitarian objectives. At a diplomatic level, the Australian government has made some effort to address the root causes of displacement from Myanmar and to nudge regional countries towards a more protection sensitive approach to irregular movement, but this has been minimal compared to the effort it devotes to the deterrence, disruption and interception of irregular movers.

There is no dearth of proposals for how Australia should respond to refugees and asylum seekers in its immediate region. Given that the government’s current response has been resoundingly successful in achieving its primary policy objective, the premise underlying all these proposals is that the government has wrongly prioritised its policy objectives. This is, of course, a value judgment, albeit one with which I wholeheartedly agree. The policy recommendations which follow make no claim to being ‘realistic’ in the present social and political climate. They are simply an articulation of what must be done if Australia wishes to claim without hypocrisy that it is a humane country. However, implementation is unlikely unless being a humane country is sufficiently important to a sufficient number of voters to mean the difference between electoral success and defeat for our main political parties.

The only way in which Australia can achieve a humane asylum seeker policy is to reverse its current ordering of policy priorities.

1.  Australia needs to cease implementing policy measures which make it more difficult for asylum seekers to obtain protection. Among other things, this means bringing OSB to an end. There is no question that in the short term there will be an uptick in attempts to travel to Australia irregularly and that some of those attempts will succeed. This will come at an immediate and significant political cost to the political party in power, unless there is a bipartisan political commitment to explaining to the Australian people that our country is geographically protected from any true mass influx and convincing them that we can afford to absorb the few thousands who may come our way annually in the short term.

2.  Australia should redirect the billions of dollars previously expended on OSB into turning the protection-friendly aspects of the 2016 Bali Declaration into a regional reality. A secondary immigration control payoff in the medium to long term may well be the stabilisation of displaced populations in countries of first asylum.

3.  Australia should also aim to bring its overall aid budget up to 0.7 per cent of GNI by 2030 as it pledged to do in 2015. This level of resourcing will, among other things, enable Australia to make a substantial investment in improving the human rights situation in refugee countries of origin such as Myanmar as well as capacity building investment in countries such as Bangladesh and Indonesia with a view to encouraging the local integration of asylum seekers and refugees through provision of legal status, work rights and access to education. This is again likely to yield a secondary immigration control payoff in the medium to long term by making unsafe sea journeys a relatively less attractive alternative for many refugees.

4.  Demographic trends in South-East Asia indicate that Malaysia, Singapore and Thailand will have an increasing need for migrant workers to meet labour force demands. These countries are not current recipients of Australian aid nor do they need it. What Australia could be doing, however, is encouraging these countries to give legal status and human rights protection to their migrant workers and to ensure, in particular, that migrant workers who happen to be refugees are not subjected to refoulement.

5.  The 2012 Report of the Expert Panel on Asylum Seekers recommended that Australia should immediately increase the size of its Refugee and Humanitarian Program to 20,000 places and consider increasing to 27,000 places within five years. The Panel also recommended that the Program ‘be more focused on asylum seeker flows moving from source countries into South-East Asia’. These are recommendations worth implementing. Such an expansion and refocusing of the Program would not by itself come close to providing a durable solution to all refugees in the region. However, it would give Australia the moral authority to encourage the further provision of resettlement places by other developed countries to refugees.

In a less than perfect world, it is extremely unlikely that perfect immigration control and perfect human rights protection are simultaneously achievable. It boils down to making a choice about who we want to be as a nation. If we want to be a humane nation, we need to choose humanitarian objectives over immigration control objectives whenever they come into conflict. If we do not, we can carry on behaving exactly as we already are.

Savitri Taylor is Associate Professor in the Law School at La Trobe University.