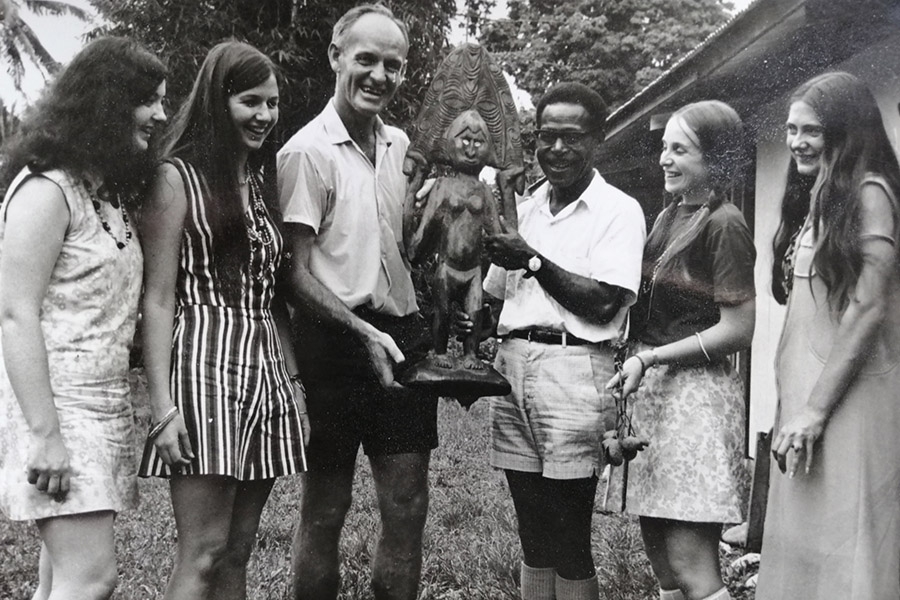 Vernon Joseph Turner dedicated his long life to promoting Asian Studies in Australia, particularly the learning of Indonesian language and culture. In January 2020, Vernon was awarded the prestigious Medal of the Order of Australia (OAM) for his contribution to education and hockey.

Vernon was an extraordinary person. He represented Australia in hockey, but his passion for coaching led him to change from a career in trade to being a student in arts and education, a teacher, an author and a university scholar. It is astonishing that a boy from a dairy farm at Coraki, near Lismore, became the first teacher of the Indonesian language in Australian schools, and one of the greatest unsung heroes of Australian community sport.

Unlike most, Vernon did not go to university straight after school. He had worked as a sheet metal worker for many years in Glebe in Sydney but realised through coaching hockey that he had a passion for teaching. With this end in mind he attended night school at Sydney Technical College in Ultimo for 3 years to obtain his Leaving Certificate, while working as a graded clerk in the public service. He earned an A grade which then allowed him to enrol in the Arts Faculty of the University of Sydney in 1953.

He graduated from the University of Sydney with a Bachelor of Arts (Honours) in 1964, having focussed on Asian Studies and writing his thesis on the Indian Educationist and Nobel Literature Laureate, Rabindranath Tagore. He published his first book Indonesian for Schools, co-authored with Hedwig Emanuels, in 1967 (Science Press) which he completed alone after Emanuels’ death midway through the writing. Part two of this series was Vernon’s own work and was published in 1968.

This was followed by awards of a Master of Education from the University of Sydney in 1973 with a thesis entitled ‘Ki Hadjar Dewantara and the Taman Siswa Movement in Indonesia’, and a Master of Arts (Honours) from the University of New England in 1980 with a thesis entitled ‘A History of Indonesian-Chinese Relations in Indonesia since Independence: the Problems of Assimilation and Integration’.

Vernon’s school teaching career started with his 1959 appointment to Croydon Park Central School whilst still studying at Sydney University. In 1963, Vernon was sent to a school in the Western Sydney suburb of St. Mary’s to establish a new course in Asian Languages and Asian Studies, where he successfully introduced teaching of the Indonesian language. During his time at the school, he pioneered the development of teaching textbooks for Indonesian language and cultural studies, delivered in-service courses on Indonesian for high school teachers, and developed a correspondence course on Asian Social Studies for New South Wales teachers.

Vernon published and spoke widely at conferences and invited events on the question of introducing Indonesian into the New South Wales school syllabus, and the merits of introducing Asian Studies for the benefit of all Australian students. His work and ideas received widespread media coverage, and by 1967 there was a groundswell in interest and enthusiasm to teach Indonesian and Asian Studies at schools around Australia using his textbooks and teaching material.

From St. Mary’s, in 1970 Vernon was appointed to a then new Teachers’ College in Goulburn as a lecturer in Asian Studies. In between his teaching efforts, Vernon and the principal Dr F.C. Whitebrook established a museum of artefacts from the Asia-Pacific. Vernon was keen to “provide an atmosphere of cultural and historical interest” with the museum housing artefacts from India, Indonesia and Papua New Guinea. He regularly took students to different parts the Asia to enrich their understanding of the region, as well as to facilitate visits from the embassies in Canberra to give talks and cultural presentations to students.

When asked about his interest in Asia he said, “Perhaps I feel it is so important for Australians to know about Asia. Or perhaps it may be my reaction against the fact that most parents and teachers favour the children studying European languages and ignore Asian culture. I am interested in Asia because of its diversity of culture. Our culture is much the same as the European culture. Australia at a young 200 years, doesn’t have a depth of its own culture yet. But the Asian culture is so different to what we know here – this holds an interest for me.”

Vernon was integral to the formation of the Asian Studies Citizens Committee in Goulburn to promote courses in Asian civilisation and languages in schools and teachers’ colleges, starting with a four-year course at the Goulburn College of Advanced Education (CAE) in 1972. It was also strongly suggested by the Committee that Asian languages be introduced in the high school curriculum and that primary schools should have “greater scope in allowing pupils to orient themselves geographically to Asian countries and their culture.” Vernon introduced the first adult evening education class at the CAE that year on ‘Comparative Asian religions and their social impact’ as well as evening classes on Asian Studies at the Workers Educational Association in Goulburn.

Vernon’s next appointment was at the Armidale College of Advanced Education in 1975, teaching Asian Studies and Indonesian language and culture. When the College became part of the University of New England in 1989, he continued lecturing there, with his country of special interest being Indonesia. He stayed at the University until he fully retired in 2002. Since then Vernon continued to live in Armidale.

Vernon was a visionary. He knew the importance of Australia’s relationship with and proximity to Asia and he was relentless in his opinion that Asia and Australia should grow together. He had great enthusiasm for providing authentic Indonesian cultural experiences which was demonstrated by the number of educational tours he personally conducted with school and university students, as well as their families, to the significant cultural and historical sites of Indonesia over the years. He took great care to bring Asian studies and culture “to life” and impart an overall respect for cultural diversity. He had a passion for learning and a life’s dedication to spreading a cultural richness into Australian education.

In 1974, Vernon married Theresia, an Indonesian woman who had moved to Goulburn to teach. She taught Indonesian language and culture at O’Connor Catholic High School in Armidale and then at the University of New England alongside Vernon. Together they have three children: Kathleen, Joseph and Damien.