The Growth of Carbon Markets in Asia 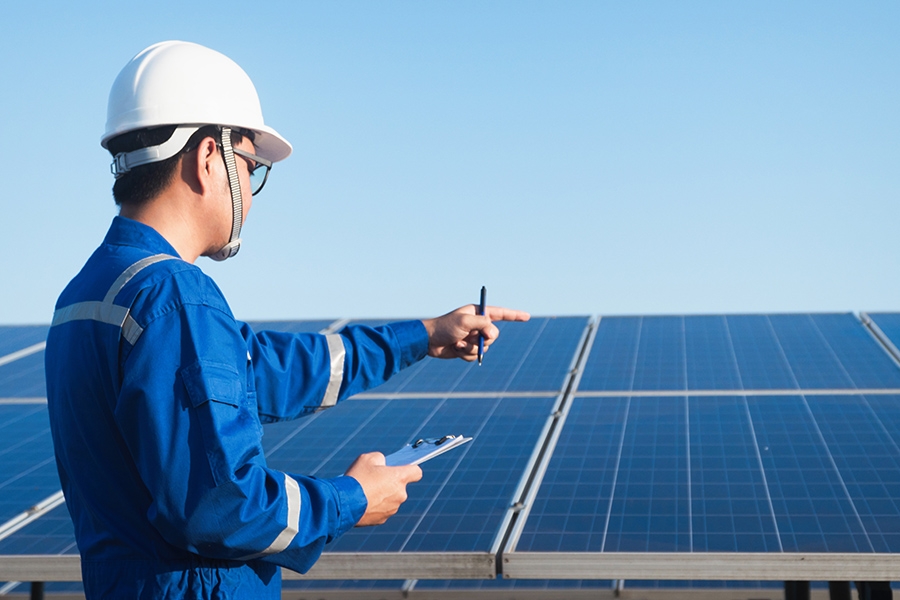 Carbon pricing or putting a price on greenhouse gas emissions is increasingly recognised as an essential instrument to cost-effectively meet emissions reduction targets.  And contrary to some perceptions, the countries that have now implemented or are planning to implement emissions trading systems in Asia represent over three-quarters of the regional economy.

This is in line with a global trend which has seen the Intergovernmental Panel on Climate Change (IPCC), the International Monetary Fund (IMF) and the Organisation for Economic Co-operation and Development (OECD) all recently reiterate the need for strengthening and accelerating carbon pricing.

This essay examines why an emissions trading system (ETS) is economically attractive; what should be its role in the policy mix; how can it be designed to be most efficient; what is the experience of ETS so far in Asia and how Australia should respond.

Why emissions trading is economically attractive

Emissions trading systems are cost-effective and economically beneficial because they encourage greenhouse gas emission reductions to occur where it is cheapest. They can also raise significant funds to invest in low carbon action, including deep decarbonisation technologies required to meet ambitious long-term targets. 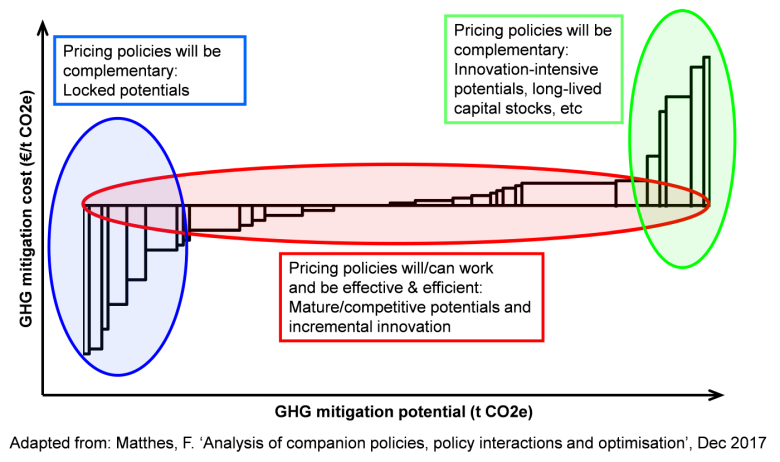 They are business-friendly because they provide flexibility in how companies can comply, enabling them to choose the most cost-effective approach and rewarding them for their low carbon actions.

The World Bank’s Carbon Pricing Leadership Coalition special commission on carbon pricing and competitiveness last year found little evidence that carbon pricing has resulted in the relocation of production or investment to other countries (known as carbon leakage) and that competitive risks can be addressed through policy design choices.

An ETS will be effective for sectors of the economy where the carbon price can drive low carbon action and where monitoring, reporting and verification costs are relatively low per unit of emission. Efficiency is better when an ETS covers a diverse range of facilities having different greenhouse gas mitigation costs, and when there are not competing policies. Overall, its potential role is in the red area in the marginal abatement cost curve diagram below.

This shows that an ETS should be a core policy for an economically efficient policy mix. Its central position is also justified by the assurance it provides in meeting specific greenhouse gas mitigation targets, making an ETS a key element in many countries’ Nationally Determined Contributions under the Paris Agreement.

Complementary policies are needed to achieve mitigation that would not be driven solely by the carbon price, such as measures with a barrier to implementation (in blue) or advanced but pre-commercial measures (in green). An ETS can still support these measures through funds sourced from ETS revenue, such as the European Union’s Innovation Fund and auction revenue recycling system.

Getting the design right

A specific ETS design will be determined by the objectives set for it by the government. These can include achievement of target greenhouse gas reductions in a cost effective way, supporting long-term low carbon action, minimizing administrative burden, avoiding carbon leakage and avoiding windfall profits to companies.

The basic building blocks of an ETS design are relatively well known, including the emissions cap, allocation system, the compliance system and carbon market.

However, in Asia, there’s often an additional challenge to achieving an efficient ETS. It is how to pass through the carbon price to electricity prices when they are government controlled. Unless an ETS incentivises power companies to switch from coal to gas and renewables, it is not fulfilling its full potential to encourage cost-effective greenhouse gas mitigation.

Achieving even greater economic efficiency will be through linking of various emissions trading systems across different jurisdictions. This will enable achievement of mitigation targets at lower cost - more important as ambition levels ramp up. For businesses, this will help further level the competitiveness playing field, simplify and harmonise compliance requirements, provide access to more abatement options and enable resources to be leveraged across countries.

In Asia, the front-runner national ETS is in the Republic of Korea. In a country reliant on internationally competitive exports, with an energy-intensive industry sector and with government-controlled electricity prices, the successful approach here should be a valuable reference for other countries.

After a challenging start in 2015, the ETS is now operationally proven and is a core policy in Korea’s 2030 GHG reduction roadmap and to meet its Nationally Determined Contribution. Its performance is closely monitored to identify potential future improvements, it is accepted by companies, has almost 100 per cent compliance, emissions are below the cap and it has generated a steadily increasing carbon price (now more than US$30/tCO2e) that can drive increasing levels of low carbon action. It is therefore widely regarded as successful.

The Korean system provides long-term visibility of emissions caps, as they align with sectoral carbon budgets and the national targets; has a free allocation system increasingly based on benchmarks which reward best performers; auctioning has started with revenues allocated for greenhouse gas mitigation projects; and the compliance system is broadly in line with international best practice.

In the third phase from 2021 to 2025 the system will be further strengthened. Market liquidity should significantly improve through participation of financial organisations; further expansions will be made to benchmark-based allocation; the auctioning share (and hence revenue) will increase; and predictable and systematic market stability measures should be introduced.

Furthermore, driven by the requirements of the energy transition and the need to reduce air pollution, it is expected that there will be progress towards a mechanism for passing through the carbon price to electricity prices, thus further incentivising lower carbon power generation. Success here will open up the possibility for much higher levels of auctioning and revenue recycling to support greenhouse gas mitigation projects.

China has gained substantial ETS experience through its pilot projects and will shortly launch a national system, initially for the power sector. This will immediately become the world’s largest system and will expand to include eight sectors and cover 4.5 billion tonnes of emissions.

China is seeking an ETS that fits with its context, offers flexibility, is without major faults, and which can be improved in operation. Cap setting is expected to reflect the contribution to national greenhouse gas mitigation targets of the covered sectors and their technical mitigation potential and costs. Initially it will use a flexible cap in line with actual output and tradeable performance standards which makes it a ‘rate based’ system. Later, it is expected to move to a ‘mass based’ system with a fixed cap. Key priorities have included the compliance system and capacity building of enterprises so they can adopt effective compliance strategies.

Japan has two sub-national ETSs, in Tokyo and Saitama, which are linked. They cover large buildings, factories, heat suppliers, and other facilities.

Taiwan has been developing an emissions trading system for over five years as a key policy to help it comply with future carbon budgets.

Across Southeast Asian countries there have been a number of recent developments, even since the COVID-19 crisis. Indonesia is planning to launch a pilot ETS later this year for power and industrial sectors and plans to start a national system by 2024; Vietnam is planning to design a system this year; and a senior Philippines MP is introducing a bill to establish an ETS for the biggest emitting sectors. A Singapore-based emissions exchange and the International Chamber of Commerce are teaming up to drive voluntary emissions trading under the Chamber’s new Carbon Council. Thailand, which has policy plans that call for development of an ETS, has already undertaken significant preparation work including developing a compliance system since 2013, formulating legislation and developing draft laws.

Closer to home, New Zealand’s ETS, which was launched in 2008 is being strengthened following recent reforms.

Carbon market cooperation across Asian countries has included the Forum of Carbon Pricing Mechanism in China, Japan and Korea, the Asia-Pacific Carbon Market Roundtable, and various bilateral cooperation initiatives. It is now expanding, for example with a new initiative, the Dialogue Facility of ETS Design Experts, being launched this year by the Asia Society Policy Institute. This seeks to identify practical solutions for the successful design and implementation of national emissions trading systems in Asia, increase their consistency and harmonization and encourage connectivity at a regional and international level.

A core policy intended to enable achievement of Australia’s 2030 greenhouse gas mitigation target (26 to 28 per cent below 2005 levels by 2030) in its Nationally Determined Contribution is the Emission Reduction Fund. This comprises an element to credit emission reductions, a fund to purchase emissions reductions and a safeguard mechanism. The latter applies to large facilities in power and industrial sectors and seeks to keep emissions below a baseline.

According to the Climate Action Tracker and the OECD Environmental Performance Review in 2019, Australia’s current policies including the Emission Reduction Fund and its support for fossil fuel electricity do not set it on a path towards meeting the 2030 target. The OECD concludes that it needs to intensify efforts to reach this target. Climate change policy would need to be strengthened to advance towards a greener economy and Australia would need to establish a more ambitious Nationally Determined Contribution for 2030 to become consistent with the Paris Agreement long-term 1.5°C temperature rise goal.

Major Asian economies are actively developing and implementing emissions trading systems as efficient best practice climate mitigation policies that play a core role in helping them meet national mitigation targets. They are increasingly recognized as business-friendly and enable countries to meet targets more cheaply due to their inherent cost-effectiveness. There is now significant momentum for developing these policies across the Asia-Pacific region and there is increasing cooperation across the countries to make national policies more effective, consistent and harmonized.

Australia’s current mitigation policies for the power and industrial sectors seem insufficient to support compliance with its 2030 targets, which themselves may not be stringent enough. Furthermore, they may not be the most economically beneficial policies for the covered sectors and the country as a whole. An ETS could be a very beneficial core policy to help address these issues.

The Australian government should do an overarching review of energy and greenhouse gas mitigation policy options for its power and industry sectors that contribute sufficiently towards meeting the current 2030 mitigation target in its Nationally Determined Contribution and also more ambitious 2030 targets consistent with the Paris Agreement long-term temperature goal. In doing so, it should consider the optimal burden sharing of these sectors in meeting the national targets compared to other economic sectors. The options should also put Australia on the right path towards meeting a net-zero greenhouse gas emission target by 2050.

The review should include consideration of an integrated energy and climate policy framework and the potential role of an ETS.

It should involve a detailed economic impact assessment at national, sectoral and company level. Environmental impacts including co-benefits should also be assessed.

Based on this review, and relevant broader strategic considerations, the adoption of potentially more ambitious 2030 mitigation targets should be assessed; the energy and climate policy framework for 2030 developed; and the specific policies chosen and later implemented.

The government should also develop this year a long-term low greenhouse gas emission development strategy that couples this near-term policy framework with milestones, targets and a roadmap that leads to net-zero emissions in 2050.