A webcast preview of our annual executive forum taking the pulse of Asia and Australia’s engagement with the region.

Asia Briefing LIVE is the premier executive forum taking the pulse of Australia’s engagement with Asia.

In 2020, and in response to global events, Asia Briefing LIVE will be presented both digitally and in-person. The forum will focus on the theme of resilience, and will ask: how resilient are Australia and Asia in the face of geopolitical, economic, health and climate challenges?

On Tuesday 28 April, the forum will go LIVE with an online, public, panel discussion, offering a deep dive into how Asia’s geopolitics, economies, and businesses are maintaining resilience in the face of the unfolding COVID-19 pandemic.

We hope that in late 2020, the forum will convene in-person, in Melbourne, to continue and widen the conversation. Asia Briefing LIVE sessions are presented in partnership with Bloomberg, the leading global business media company and are moderated by Bloomberg’s award-winning journalists and editors.

Asia Briefing LIVE brings together Australian and global CEOs, business and non-profit leaders with academics, analysts and policymakers. The project is supported by the Victorian Government.

This session will now run online only. For any enquiries, please contact programaustralia@asiasociety.org.

For access to  other exclusive events, become an Asia Society Australia member.

Tim was elected to the Victorian Parliament in 2006 and is the state member for Werribee. Following the election of the Andrews Labor Government in November 2014, he was sworn in as Victoria’s 50th Treasurer – a position he holds to this day. He is also currently the Minister for Economic Development and Minister for Industrial Relations.

Tim previously served in the Bracks and Brumby Governments as Minister for Roads and Ports, and later added Major Projects to his responsibilities. He was also previously Minister for Resources in the last term of the Andrews Labor Government, overseeing a period of significant growth.

As Minister for Roads, he delivered the EastLink, oversaw the M1 Upgrade, the construction of the Deer Park Bypass and Geelong Ring Road, completed the upgrade of the Calder Freeway to improve links to Bendigo, and was responsible for commencing the Peninsula Link project on the Mornington Peninsula.

In the Major Projects portfolio, he was responsible for big ticket items like the development of AAMI Stadium, the Melbourne Convention and Exhibition Centre, as well as the Melbourne Recital Centre and Melbourne Theatre Company’s auditorium.

Tim’s first budget as Treasurer in May 2015 delivered the biggest education budget and investment in public transport in the State’s history. His second budget in April 2016 included the single biggest school capital investment in Victoria’s history as well as fully funding the construction of Melbourne’s new Metro Tunnel. His third budget in May 2017 included an unprecedented $1.9 billion investment to tackle family violence.

The 2019/20 Budget delivered a suburban transport blitz, universal three-year-old kinder, and the solar homes initiative, while maintaining a strong and steady economic approach.

In Tim’s time as Treasurer, we have seen a significant improvement in Victoria’s economy, with the fastest growth in full-time jobs in the nation.

Tim studied Arts/Law at the Australian National University prior to taking up roles with the Federal Firefighters Union and the Storemen and Packers Union. Tim still holds a legal practising certificate and is also a Graduate of the Australian Institute of Company Directors.

He later served as Assistant Secretary of the ACTU before taking up a position as Chief of Staff to Premier Steve Bracks.

He is married with two children and is a passionate supporter of the Western Bulldogs, Melbourne Storm, Melbourne Victory and the Melbourne Vixens. In his spare time, Tim works towards fulfilling a dream of being an accomplished chilli farmer.

Wendy Cutler joined the Asia Society Policy Institute (ASPI) as vice president in November 2015. She also serves as the managing director of the Washington D.C. Office. In these roles, she focuses on building ASPI’s presence in Washington — strengthening its outreach as a think/do tank — and on leading initiatives that address challenges related to trade and investment, as well as women’s empowerment in Asia.

She joined ASPI following an illustrious career of nearly three decades as a diplomat and negotiator in the Office of the U.S. Trade Representative (USTR). Most recently she served as Acting Deputy U.S. Trade Representative, working on a range of U.S. trade negotiations and initiatives in the Asia-Pacific region. In that capacity she was responsible for the Trans-Pacific Partnership (TPP) agreement, including the bilateral negotiations with Japan. She also was the chief negotiator to the U.S.-Korea (Korus) Free Trade Agreement.

John Meacock is the Chief Strategy Officer (CSO) for Deloitte and a member of the Global Executive. John is responsible for Strategy and Innovation across the Global network.

John’s role includes driving transformation of the organization to develop new business models and new ways of servicing clients and ensuring that Deloitte continues to be the World’s leading Professional Services Firm. Prior to this role, he was the CSO for Deloitte Australia and the Asia Pacific region, where he responsible for developing plans for future growth and structure of Australia and the region. Until June 2019, John was Deputy Chairman of Deloitte’s Global Board and was a member of the Global Board’s Composition and Risk Committees. The youngest of four brothers, John was born in Bruce Rock, Western Australia. He has two children. John has an appreciation for art and is the former Independent Chairman for The Brett Whiteley Foundation and a Director of the Asia Society.

Belinda Hutchinson AM became the 18th Chancellor of the University of Sydney in February 2013. She is a strong advocate for the critical role of world-class education and research in securing Australia’s social and economic future.

She graduated with a Bachelor of Economics degree from the University of Sydney and in 2012 received a University Alumni Award for professional achievement.

She has a deep interest in developing a culture of philanthropy and sits on a number of not-for-profit boards, including Australian Philanthropic Services. She is currently also Trustee of the St Vincent’s Curran Foundation and Chairman of Future Generation Global Investment Company, Australia’s largest impact investing fund with a focus on child and youth mental health. Her family foundation supports a variety of community-based initiatives such as the Hunger Project in Malawi, Africa.

Belinda is a champion for increasing opportunities for women in leadership positions and is a past president of Chief Executive Women, which comprises more than 400 of the country’s women leaders.

Mark is based in Sydney and is the Regional Managing Director for Compass Group in Asia Pacific and is a member of Compass Group’s Executive Board. Compass Group is a world-leading food and support services company operating in 45 countries with more than 650,000 associates, serving over 5.5 billion meals every year.

One of Mark’s greatest passions is encouraging healthier lifestyles and a more sustainable food system. Mark is also passionate about seeing Australia realise its full potential within the Asia Pacific region and is chair of a BCA/Asia Society Taskforce focusing on building Australia’s trading relationship with Asia.

Mark has lived in the UK, Ireland, Switzerland and Australia.

Greg Earl is the editor of Briefing MONTHLY, a public update with news and original analysis on Asia and Australia-Asia relations, and the essay series Disruptive Asia. Greg was the deputy editor, opinion editor, national affairs editor and Asia Pacific editor of The Australian Financial Review. He spent more than a decade as a reporter based in Tokyo, Jakarta, and New York.

His connection with the region began as a high school Indonesian language student and then as an exchange student in the Philippines. This year he has been a member of an international observer group during the Indian election; attended the Australia-Vietnam Young Leadership Dialogue in Ho Chi Minh City; and served on the selection panel for an AAC Muslim Exchange Program in South East Asia.

Ed is a journalist with two decades of experience reporting on politics, world affairs, and financial markets. As a managing editor for Bloomberg News in Sydney, he oversees a team of more than 40 reporters and editors covering markets, companies, economy, and government in Australia and New Zealand.

Asia Briefing LIVE is Asia Society Australia's signature event - an annual executive forum taking the pulse of the major developments in Asia and the state of Australia’s engagement with the region. Building on the success of our public newsletter, Briefing MONTHLY, Asia Society Australia brings together 100 senior business leaders and policymakers for an in-depth discussion of geopolitical and business landscape in Asia and Australia’s relations in the region, against the backdrop of global economic and strategic uncertainty. 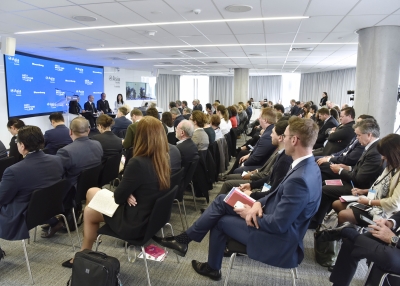 A note on our programs throughout the COVID-19 outbreak.