Report Launch | A Second Chance: How Team Australia can Succeed in Asia

An initiative by the Asia Taskforce 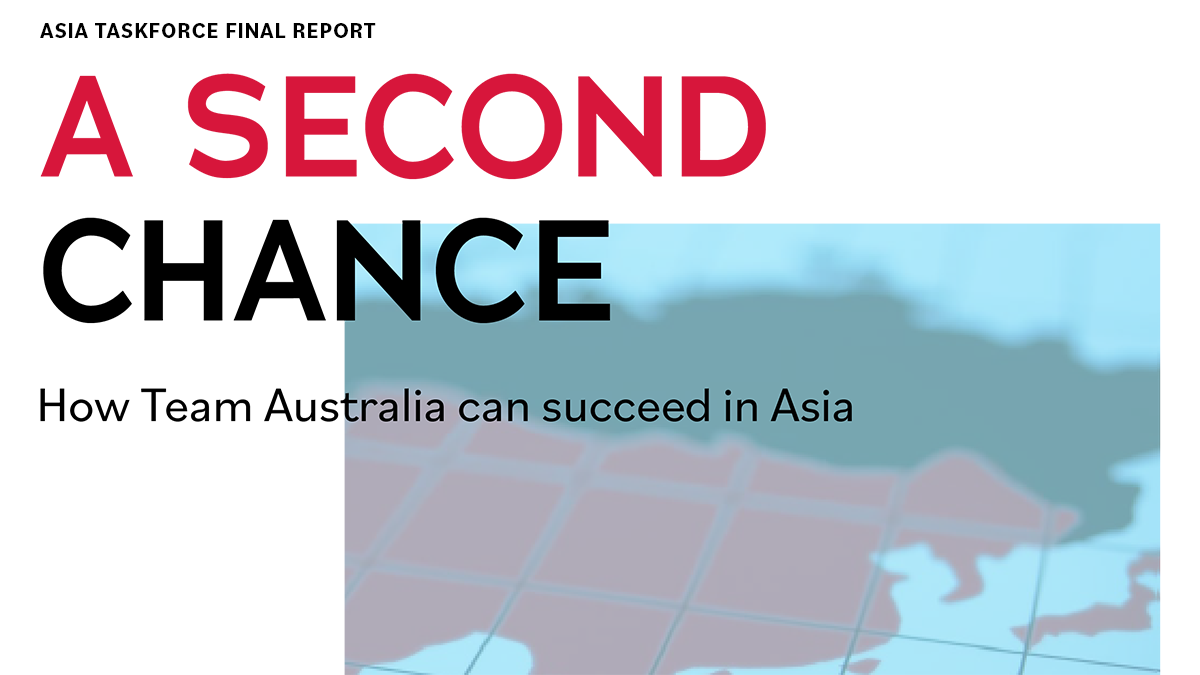 Join the Asia Taskforce, an initiative of the Business Council of Australia, Asia Society Australia and knowledge partners PwC and the University of Sydney Business School for the official media launch of A Second Chance: How Team Australia can succeed in Asia.

A public live stream of this event will be available. Additional launch events in Sydney, Melbourne, or other locations to be announced.

In-person attendance is by invitation only, Media is required to pre-register.

This event is in partnership with:

Mark is based in Sydney and is the Regional Managing Director for Compass Group in Asia Pacific, and is a member of Compass Group’s Executive Board. Compass Group is a world-leading food and support services company operating in 45 countries with more than 650,000 associates, serving over 5.5 billion meals every year.

One of Mark’s greatest passions is encouraging healthier lifestyles and a more sustainable food system. Mark is also passionate about seeing Australia realise its full potential within the Asia Pacific region and building Australia’s trading relationship with Asia. Mark also sits on the Board of the AJBCC.

Mark has lived in the UK, Ireland, Switzerland and Australia.

Jennifer Westacott AO has served as Chief Executive of the Business Council of Australia since 2011, bringing a unique combination of extensive policy experience in both the public and private sectors.

Under her leadership, the Business Council tirelessly champions meaningful policies that strengthen the ability of businesses to grow the economy for the benefit of all Australians.

Jennifer built her career in the public sector, working in senior leadership positions in the NSW and Victorian governments.

As a senior partner at KPMG, Jennifer advised major corporations on climate change and sustainability and advised governments across Australia on significant reform priorities.

Jennifer has an unrivalled understanding of how the public and private sectors intersect and can work together to achieve the best outcomes in the national interest.

Since 2013, Jennifer has served as a Non-Executive Director of Wesfarmers Limited.

Jennifer is an Adjunct Professor at the City Futures Research Centre of the University of NSW.

She is the inaugural Chair of the Board of Studio Schools of Australia, a patron of Mental Health Australia, the Co-Patron of Pride in Diversity, and a patron of the Pinnacle Foundation.

In 2018, Jennifer was made an Officer (AO) in the General Division of the Order of Australia.

Jennifer has a Bachelor of Arts (Honours) from the University of New South Wales and in 2017 received an Honorary Degree (Doctor of Letters) from her alma mater. She was a Chevening Scholar at the London School of Economics.

Andrew is a Partner at PwC where he leads the Australian Firm’s Asia Practice. Andrew joined Price Waterhouse in 1985, became a partner in 1999 and spent 12 years in PwC’s London, Moscow and Jakarta offices. Andrew has had a long association with Asia having lived and worked in Indonesia and was the leader of PwC’s Asian telecoms industry team until 2012, a role he held for nearly 10 years.

Andrew is a Fellow at the Institute of Chartered Accountants and holds a Bachelor of Economics from Macquarie University in Sydney.