Former Prime Minister of Australia joins us in Sydney 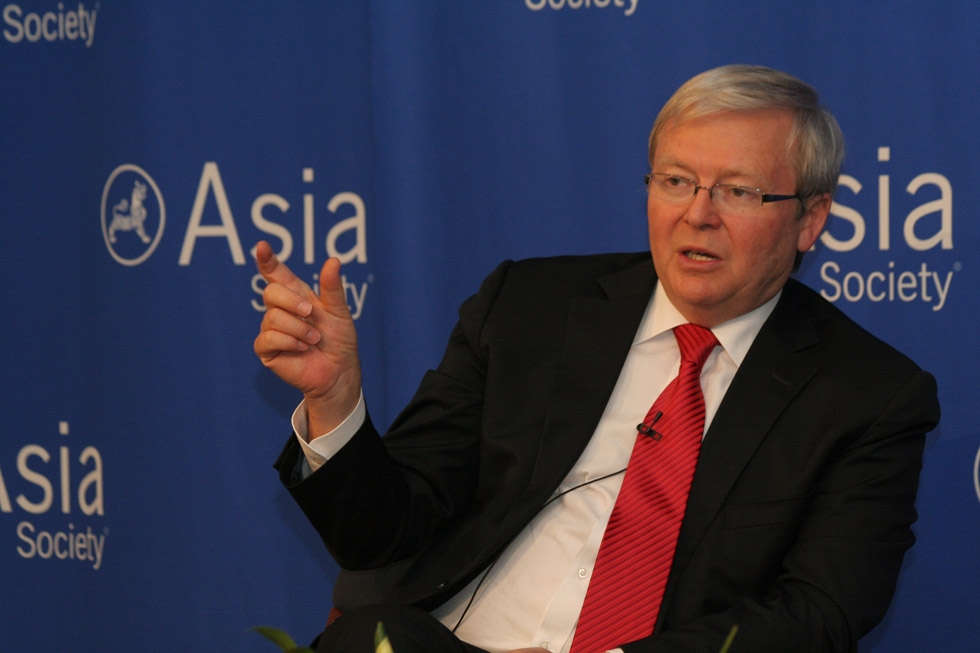 In an increasingly multi-polar Asia Pacific region, it has never been more crucial for Australia to get its relationship with China right.

In 2011, as Foreign Minister of Australia, Mr Rudd asserted there was a third way for dealing with a rising China "other than conflict or Kow Tow". Seven years later as Australia-China debate becomes more polarised, there is greater demand for a middle-ground policy response.

Recognised as one of the leading global thinkers on foreign policy, Mr Rudd will address how Australia today needs a more balanced relationship with China. One which recognises the economic imperatives of the relationship while not undermining our core values as a Western democracy and our interests as an ally. Mr Rudd will also address the immediate implications and trajectory of the US-China trade war. The speech will be followed by an in-conversation interview with Bloomberg's Haidi Lun and audience Q&A.

This event is open to members of Asia Society Australia, GEN A and invited guests only. Registration is essential, space is limited. For more information please contact programaustralia@asiasociety.org.

Registration for this event is now closed.

Mr. Rudd served as Australia’s 26th Prime Minister (2007-2010, 2013) and as Foreign Minister (2010-2012). He led Australia’s response during the Global Financial Crisis, reviewed by the IMF as the most effective stimulus strategy of all member states. Australia was the only major developed economy not to go into recession. Mr. Rudd helped found the G20 to drive the global response to the crisis, and which in 2009 helped prevent the crisis from spiraling into depression.

As Prime Minister and Foreign Minister, Mr. Rudd was active in global and regional foreign policy leadership. He was a driving force in expanding the East Asia Summit to include both the U.S. and Russia in 2010, and initiated the concept of transforming the EAS into a wider Asia Pacific Community. On climate change, Mr. Rudd ratified the Kyoto Protocol in 2007 and legislated in 2008 for a 20 percent mandatory renewable energy target for Australia. He represented Australia at the 2009 Copenhagen Climate Change Summit which produced the Copenhagen Accord, for the first time committing states to not allow temperature increases beyond two degrees. He was appointed a member of the UN Secretary-General’s High Level Panel on Global Sustainability and is a co-author of the report Resilient People, Resilient Planet for the 2012 Rio+20 Conference. Mr. Rudd drove Australia’s successful bid for its non-permanent seat on the United Nations Security Council for 2012-2014. His government also saw the near doubling of Australia’s foreign aid budget to approximately $5 billion, making Australia then one of the top ten aid donors in the world. He also appointed Australia’s first ever Ambassador for Women and Girls to support the critical role of women in development and reduce physical and sexual violence against women. More >>