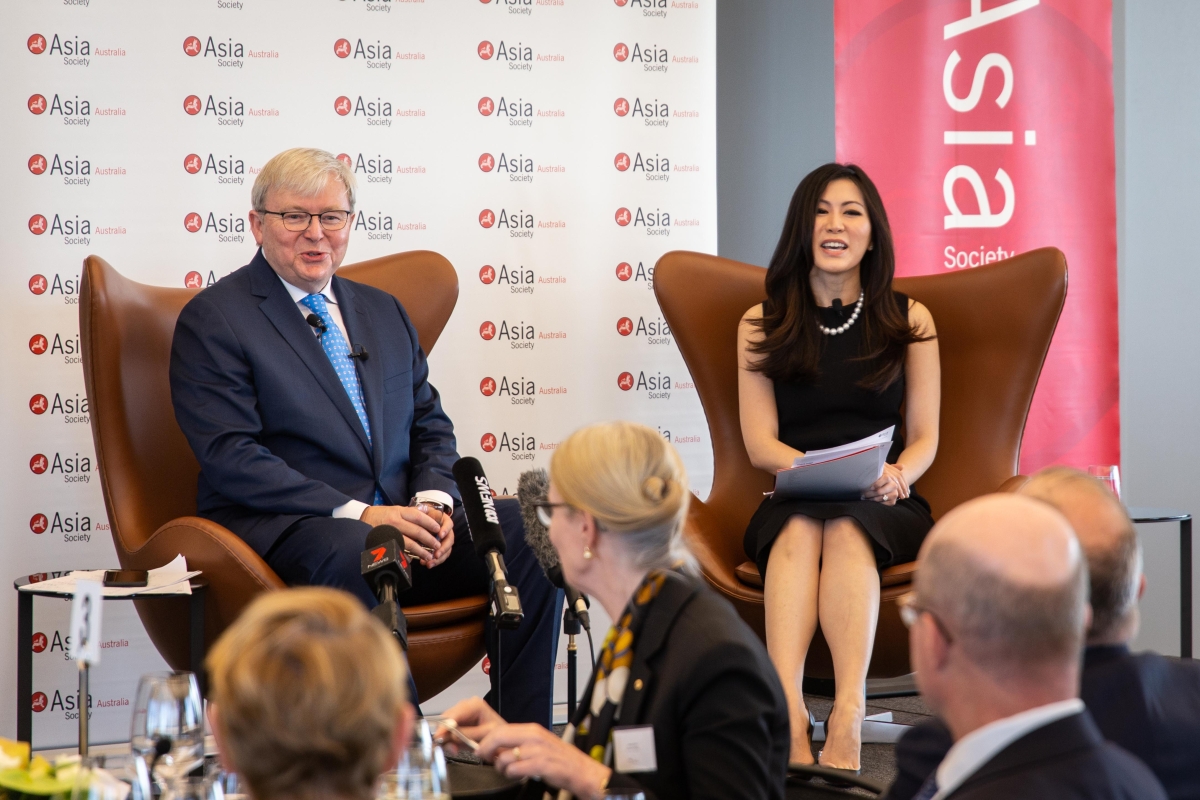 As US-China trade tensions persist, what are the implications for our region?

Asia Society Australia is pleased to host Former Prime Minister and now President of Asia Society Policy Institute, The Hon Kevin Rudd AC, in Melbourne for a special Leaders on Asia address. Recognised as one of the leading global thinkers on foreign policy, Mr. Rudd will discuss the U.S.-China relationship and its regional implications. The address will be followed by an in-conversation interview with Asia Society Australia CEO Philipp Ivanov.

This event is open to the public. Registration is essential, space is limited. For more information please contact programaustralia@asiasociety.org.

The Honorable Kevin Rudd served as Australia’s 26th Prime Minister (2007-2010, 2013) and as Foreign Minister (2010-2012). He is also a leading international authority on China. He began his career as a China scholar, serving as an Australian diplomat in Beijing before entering Australian politics.

As Prime Minister, he led Australia’s response during the Global Financial Crisis, reviewed by the IMF as the most effective stimulus strategy of all member states. Australia was the only major developed economy not to go into recession. Mr. Rudd co‑founded the G20 to drive the global response to the crisis, which in 2009 helped prevent the crisis from spiraling into depression.

As Prime Minister and Foreign Minister, Mr. Rudd was active in global and regional foreign policy leadership. He was a driving force in expanding the East Asia Summit to include both the U.S. and Russia in 2010, and launched the long-term concept of transforming the EAS into a wider Asia Pacific Community. On climate change, Mr. Rudd ratified the Kyoto Protocol in 2007 and legislated in 2008 for a 20 percent mandatory renewable energy target for Australia. He represented Australia at the 2009 Copenhagen Climate Change Summit which produced the Copenhagen Accord, for the first time committing states to not allow temperature increases beyond two degrees. He was appointed a member of the UN Secretary-General’s High Level Panel on Global Sustainability and is a co-author of the report Resilient People, Resilient Planet for the 2012 Rio+20 Conference. This report was the first to recommend the negotiation of the Sustainable Development Goals.

Mr. Rudd drove Australia’s successful bid for its non-permanent seat on the United Nations Security Council for 2012-2014. His government also saw the near doubling of Australia’s foreign aid budget to approximately $5 billion, making Australia then one of the top ten aid donors in the world. He also appointed Australia’s first ever Ambassador for Women and Girls to support the critical role of women in development and reduce physical and sexual violence against women.

Domestically, Mr. Rudd delivered Australia’s formal national apology to indigenous Australians. In education, his government introduced Australia’s first-ever nationwide school curriculum, undertook the biggest-ever capital investment program in Australian schools with the building of thousands of new state of the art libraries across the country, as well as introducing the first-ever mandatory national assessment system of literacy and numeracy standards. In health, Mr. Rudd in 2010 negotiated with the Australian states a National Health and Hospitals Reform Agreement, the biggest reform and investment in the health system since the introduction of Medicare 30 years before. His government established a national network of leading-edge cancer care centers across Australia, before introducing the world’s first ever plain-packaging regime for all tobacco products. To improve the rate of organ and tissue donation, he established Australia’s first National Organ and Tissue Transplant Authority. In 2010, his government introduced Australia’s first-ever paid parental leave scheme and implemented the biggest increase in, and reform of, the age pension since federation. He also founded the National Broadband Network to deliver high-speed broadband for every household, business, school, hospital, and GP in the country.

Mr. Rudd joined the Asia Society Policy Institute (ASPI) in New York as its inaugural President in January 2015. ASPI is a “think-do tank” dedicated to using second-track diplomacy to assist governments and businesses in resolving policy challenges within Asia, and between Asia and the West. In this capacity he chaired an international panel which produced an ASPI report entitled on the development of long-term security architecture in the Asia-Pacific region, entitled Preserving the Long Peace in Asia

Mr. Rudd is Chair of the Board of the International Peace Institute in New York, a United Nations-related think tank dedicated to peace and security issues, focusing on the Middle East. In his IPI capacity, Mr. Rudd in 2015-16 chaired a two-year-long Independent Commission on Multilateralism, which produced a comprehensive report on reforming the UN system entitled UN 2030: Rebuilding Order in a Fragmenting World. Since 2015, Mr. Rudd has also been Chair of Sanitation and Water for All, a global partnership of government and non-government organizations dedicated to the implementation of Sustainable Development Goal 6.

He is a Distinguished Fellow at Chatham House in London, a Distinguished Statesman with the Center for Strategic and International Studies in Washington DC, a Distinguished Fellow at the Paulson Institute in Chicago, and a member of the Comprehensive Nuclear Test-Ban Treaty Organization’s Group of Eminent Persons. He serves on the International Advisory Board of the Schwarzman Scholars program at Tsinghua University, and is an Honorary Professor at Peking University. Mr. Rudd is proficient in Mandarin Chinese.

Mr. Rudd in his private capacity has established the Australian National Apology Foundation to continue to promote reconciliation and closing the gap between indigenous and non-indigenous Australians.

Mr. Rudd is a regular contributor to global media on international relations, climate change and China. He has been featured in the Financial Times, The New York Times and Le Monde, and regularly appears on the BBC, CNN, CNBC, Fox and Bloomberg.

Tim was appointed to Deputy Secretary, Economic Policy and State Productivity in March 2019. Prior to this, Tim was Deputy Secretary of Jobs and Innovation in the Department of Jobs, Precincts and Regions where he was responsible for the strategic development of manufacturing, life sciences, digital tech, professional services and international education and the delivery of telecommunications and employment programs.

Tim has also held executive positions in the then Department of Environment and Primary Industries. In the mid 2000's, Tim established and managed the Victorian Government Business Office in New York.

Tim has Bachelor and Masters degrees in Agriculture Science from The University of Melbourne. He grew up in rural Victoria.

Vera joined Deloitte in August 2017 as National Leader of the Deloitte Chinese Services Group. Vera is an Asian-Australian relationship specialist, and is seen by her senior colleagues as an architect of East-West success. She is a versatile senior executive with extensive cross cultural industry, client relationship and business development experience.

Being fluent in a breadth of Asian languages, as well as having the ability to adapt to different Asian cultural settings, Vera brings strong and innovative insights to Asian business.

C-Suite level experience gained in both professional services and financial services has been a major contributor to Vera’s success in developing strong client relationships, and in managing and motivating teams. This is evident in her passion for realising the interests of her clients and stakeholders - and is at the heart of all her business endeavours.

Our Leaders on Asia program presents high-profile events with visiting heads of state, ministers, senior officials, dignitaries and leading thinkers from the Indo-Pacific region and Australia. It provides members with unique direct access to leaders who shape the present and future of our region.