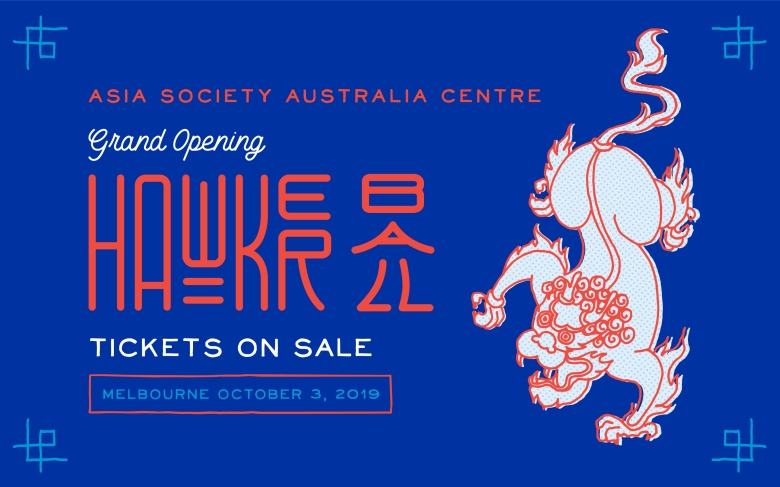 In partnership with the Victorian Government, we are bringing our global community together with local members and supporters for a night of celebration.

Inspired by the Hawker centres of South East Asia where flavour, culture and ideas collide and coexist, Hawker Ball will celebrate the rich diversity of heritage, story, sound and taste that make up Asia and the deep personal ties that connect Australia to this region.

Over 400 guests will be addressed by the Premier of Victoria Daniel Andrews; Asia Society Global Vice President, Tom Nagorski; Australia’s High Commissioner to India, Ambassador Harinder Sidhu; Australian political and business leaders, and game-changers of Australia-Asia engagement under the stained-glass ceiling of the National Gallery of Victoria’s Great Hall.

Hawker Ball is set to the backdrop of NGV’s Winter Masterpieces, a dual presentation of the ancient Terracotta Warriors alongside a display of new works by one of the world’s most exciting contemporary artists, Cai Guo-Qiang. Views of the exhibit will be available to guests on the night.

Plus GST and booking fee.

A note on table purchases:
Please note only one name is required at checkout to purchase a table. Our team will be in touch after you’ve secured your tickets to confirm the names and details of your table guests.

For assistance with ticket or table purchases please contact the Asia Society Australia team in Melbourne. E: programaustralia@asiasociety.org or P: +61 (3) 9690 0629.

Deborah Cheetham, Yorta Yorta woman, soprano, composer and educator has been a leader and pioneer in the Australian arts landscape for more than 25 years. In the 2014 Queen’s Birthday Honours List, Cheetham was appointed as an Officer of the Order of Australia (AO).

In March 2015 she was inducted into the Honour Roll of Women in Victoria and in April 2018 received an Honorary Doctorate from the University of South Australia. In 2019 Deborah Cheetham received the Merlyn Myer Prize for composition and was presented with the Sir Bernard Heinze Memorial Award for service to music in Australia.

The Hon Daniel Andrew is the 48th Premier of Victoria, a position he has held since December 2014. Daniel entered the Victorian Parliament in 2002 as the Member for Mulgrave, representing families in Melbourne’s South Eastern suburbs. He was appointed to the Cabinet in 2006, as Minister for Consumer Affairs and Gaming, and as Minister Assisting the Premier on Multicultural Affairs. In 2007, he became Minister for Health.

In December 2010, Daniel became Leader of the Victorian branch of the Australian Labor Party.

Daniel grew up in regional Victoria and completed secondary school in Wangaratta. He went on to attend Monash University, completing his Bachelor of Arts.

Tom Nagorski became Executive Vice President of the Asia Society following a three-decade career in journalism — having served most recently as Managing Editor for International Coverage at ABC News.

Before that, he was Foreign Editor for ABC’s World News Tonight, and a reporter and producer based in Russia, Germany, and Thailand.

Nagorski was the recipient of eight Emmy awards and the Dupont Award for excellence in international coverage, as well as a fellowship from the Henry Luce Foundation.

He has written for several publications and is the author of Miracles on the Water: The Heroic Survivors of a World War II U-Boat Attack. Nagorski serves on Princeton University’s Advisory Council for the Department of East Asian Studies, the Advisory Board of the Committee To Protect Journalists, and is a member of the Council on Foreign Relations.

He graduated from Princeton University in 1984. He lives in Brooklyn with his wife and two children.

Ties that bind - how Asia has shaped the lives of:

Li was born in China and was selected to study at Beijing Dance Academy in 1972. Upon his graduation in 1979, he received one of the first cultural exchange scholarships to America. Li subsequently became principal dancer with Houston Ballet and then The Australian Ballet. He guest performed with some of the best ballet companies in the world.

Li won two Silver and Bronze Medals at three international ballet competitions. He was twice winner of the prestigious Princess Grace Dance Fellowship and Statuette Awards in America and was also twice award winner of the Green Room Award for Best Male Dancer in Australia. He retired from dancing in 1999 and then made a successful career transition from ballet into finance. He was a senior manager at one of the largest stockbroking firms in Australia.

Li served on the boards of the Bionics Institute, The Australian Ballet and Councillor of the Australian Council for the Arts. He was awarded Honorary Doctorates by the Australian Catholic University, Griffith University and Fellow of St Johns College of University of Queensland for his contribution in Dance, Literature and Society. He was named 2009 Australian Father of the Year, Queensland Australian of The Year in 2014 and received the Asia Society’s Asia Game Changer Award. Li was awarded an AO (Officer of the Order of Australia) in 2019.

In 2003, Li published his international best-selling autobiography, “Mao's Last Dancer”, which has received numerous awards and was adapted as a feature film in 2009. His story also came to life in 2018 as an exhibition at The Museum of Brisbane, “Mao’s Last Dancer – A Portrait of Li Cunxin”. This exhibition also toured to Melbourne.

He is the Artistic Director of Queensland Ballet.

Harinder Sidhu has held the post of Australia’s High Commissioner to India since February 2016. She also holds non-resident accreditation to the Kingdom of Bhutan. Ms Sidhu brings over 30 years’ experience in government. She began her career as a diplomat with the Department of Foreign Affairs and Trade.

Before her appointment to India, she served as head of the Department’s Multilateral Policy Division with responsibility for Australia’s relationships with the UN and UN agencies, the UN Security Council and the Commonwealth.

Between 2008 and 2013, Ms Sidhu held the post of First Assistant Secretary in the Department of Climate Change. Prior to that, she served in several senior roles in government, particularly on defence and national security matters in the Department of the Prime Minister and Cabinet and the Office of National Assessments.

Ms Sidhu has served overseas at Australian Embassies in Damascus and Moscow, and was also posted to Cairo where she studied the Arabic language. She holds degrees in Economics and Law from the University of Sydney.

Alfira, born in Perth of Acehnese-Irish descent, is a dance artist who specialises in traditional and contemporary Indonesian dance styles. In 2001, Alfira founded Suara Indonesia Dance Group and her dedication, diligence and talent have granted her several Indonesian Government Scholarships.

Her educational repertoire includes studying at the Institute of the Arts Yogyakarta and Surakarta (Central Java). In Aceh (North Sumatra) she researched and trained under master instructors in Acehnese sitting dances which are rhythmical body percussion dances, accompanied by devotional Islamic melodic songs. She holds a degree in International Studies (UNSW ) and an Honours in Indonesian Studies at Sydney University, completing a thesis on the history and significance of Acehnese body percussion sitting dances.

Alfira performs as a solo artist as well as with her dance troupe at national and international festivals. Notably, her artistic contribution goes beyond pure entertainment. Alfira is a modest humanitarian who has volunteered her time in Palestine, teaching body percussion dances in refugee camps as a method of trauma relief (2010). She has also been to Papua New Guinea in the Goroka highlands to teach workshops in villages (2011). In Aceh, 2006, she monitored trauma-healing programs that taught traditional dance to victims of the 2004 tsunami and 30-year conflict in Aceh.

Preserving and honouring her cultural heritage through dance is a key objective of Alfira's and subsequently her dance group has taught Indonesian dance workshops in hundreds of schools across Australia and New Zealand and Europe.

She has collaborated with a number of Indonesian and Australian contemporary music ensembles and artists including: The Rhythm Hunters, Gong Baby, Garis, Anything But Roy and GengGong, Slamet Gundono, Agung Gunawan, Jade Dewi Tyas Tunggal and Wei Zen Ho.

Darcy has been immersed in sport from a young age, beginning her Auskick career at age five. Playing out her junior football with the boys, Darcy made her senior women’s debut in 2012. She represented Victoria at the AFL Women’s National Championships in 2013 and 2015. In July 2016, Carlton Football Club signed her as a marquee player, ahead of Darcy playing in the AFLW's first ever game in the league’s inaugural 2017 season.

She finished the season as AFLW’s Leading Goal Kicker, took Mark of the Year and was recognised through gaining selection in AFLW’s first ever All Australian Team. In the 2018 VFLW season, Darcy picked up the Rohenna Young Medal as the league’s
leading goal kicker and selected in Team of the Year.

Darcy has also been an AFL Multicultural Ambassador, proudly representing her Chinese/Italian background and using her voice to encourage others who wish to follow in her footsteps.

Prowling the Australian scene, Western Sydney artist L-FRESH The LION has quickly become renowned for his powerful presence, inspiring live shows and thought-provoking lyricism. His organic amalgam of world-class music and social activism has seen him seamlessly segue from underground events and ciphers to national tours and major festivals, the natural ascent of an MC with an abundance of purpose and self-belief.

Many musicians lay claim to being unique, but inspired by hip hop music from the mid-‘90s and early-2000s, and a deep love and respect for his own cultural and ancestral roots which trace back to the Sikhs from Punjab, India, L-FRESH is truly an artist like no other.

Introducing himself to music lovers in 2014 with a classy opening gambit, his debut album One announced L-FRESH The LION as an integral part of the new generation of hip hop artists still making waves in the Australian music industry to this day.

It paved the way for his signing to legendary Australian-based hip hop label Elefant Traks in 2015, who helped L-FRESH The LION release his acclaimed sophomore album BECOME in May of 2016. That record spawned powerhouse singles Get Mine (feat. Parvyn) and 1 In 100,000, both of which received regular rotational radio play across Australia and in the UK on BBC’s Asian Network.

The unabashed strength of this second L-FRESH statement and the traction gained by its catchy and thought-provoking radio tracks found BECOME being nominated for Best Urban Album at the 2016 ARIA Awards.

But the studio isn’t the only habitat where L-FRESH The LION rules the domain, the hard-working talent having also built a powerful reputation for his passionate and stirring live shows. No stranger to the road, L-FRESH and his trusted live band have shared stages with names such as Nas, Dead Prez and Talib Kweli, as well as spitting captivating rhymes to crowds at Splendour In The Grass, Groovin’ The Moo, WOMADelaide, Woodford Folk Festival, NYE On The Hill, The Plot, and numerous other Australian festivals.

And it’s not only Australian audiences relishing the L-FRESH The LION experience, the MC recently took his first steps onto the international stage supporting fellow Aussies the Hilltop Hoods and Thundamentals in the UK, as well as rocking his own well-received headline show in London.

Even global creative platforms and the corporate world is clamouring to hitch their name to the L-FRESH The LION wagon. The MC is Australia’s only fellow for YouTube‘s Creators For Change program, an ambassador for All Together Now and White Ribbon Australia, as well as a brand ambassador for Holden, AFL NSW/ACT and RES Denim.

He’s an artist of rare integrity and relevance, whose music strives to break down cultural barriers and make our society a better place as much as it does to illuminate and entertain. There’s only one L-FRESH The LION, and his appetite for effecting change via his moving words and music will never be extinguished.

The Melbourne Symphony Orchestra is a leading cultural figure in the Australian arts landscape, bringing the best in orchestral music and passionate performance to a diverse audience across Victoria, the nation and around the world.

The nation’s first professional orchestra, the Melbourne Symphony Orchestra has been the sound of the city of Melbourne since 1906.