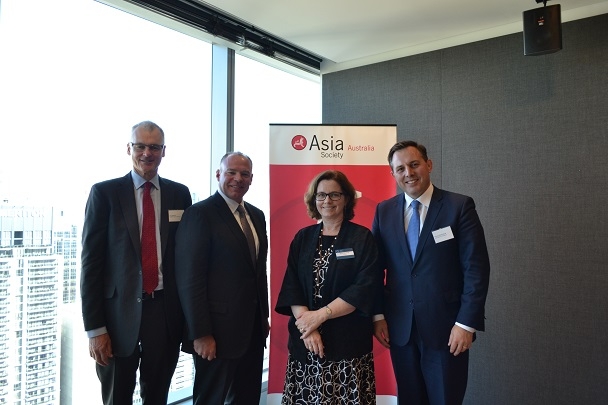 Asia Society Australia recently had the pleasure of hosting Dr Ian Thomas, former CEO of Boeing Australia and Boeing China, and now CEO of Thomas Global Ventures, at an intimate luncheon briefing. Hosted by Herbert Smith Freehills, the roundtable brought together a collection of Asia Society members, old and new, to talk China.

Dr Thomas presented his observations on China, its place in the region and on the world stage.

Financial market and economic reform
Dr Thomas began his briefing with an update on transparency and efficiency in the Chinese Financial Markets and how this would influence the changing nature of the Chinese economy. In particular he noted a shift toward consumption and services. He projected a clean-up of the shadow banking system would drastically increase the value of the Yuan.

Innovation nation
Dr Thomas highlighted the changing innovation environment in China. Policy is focusing more and more on innovation as the driver of economic productivity.

Environmental sustainability
Dr Thomas touched on the societal implications of pollution in China. He noted the huge business opportunities that have arisen from the pressing need to develop environmentally sustainable solutions domestically. He also noted an increasing trend towards exporting heavy-emitting infrastructure industries via the One Belt One Road Initiative.

Regional tensions
In the regional context, China is facing a number of issues in the South China Sea. These were explored in terms of their political and economic impact, with discussion of a possible regional or bilateral solution. Dr Thomas stressed the need for states to build genuine understanding and cooperation if they hope to diffuse disputes.

Taking flight
As an aviation industry veteran, Dr Thomas had insights on Chinese aviation and its contribution to the industry. He spoke of domestic investment in planes and airports, as well as financial backing for the purchase of planes by foreign companies. Given China's ambition as a rising power, Dr Thomas also forecasted China would become increasingly active in space.

Q&A
Questions covered the South China Sea dispute, a possible Chinese debt crisis, Xi Jinping’s anti-corruption campaign, the need for transparency to secure Asia’s future as a hub for financial services, and a Donald Trump reality check: 'What would US China relations look like under a Trump POTUS?'.

This event was generously sponsored by Herbert Smith Freehills.