From COVID to Containers: Managing the New Supply Chain Disruptions 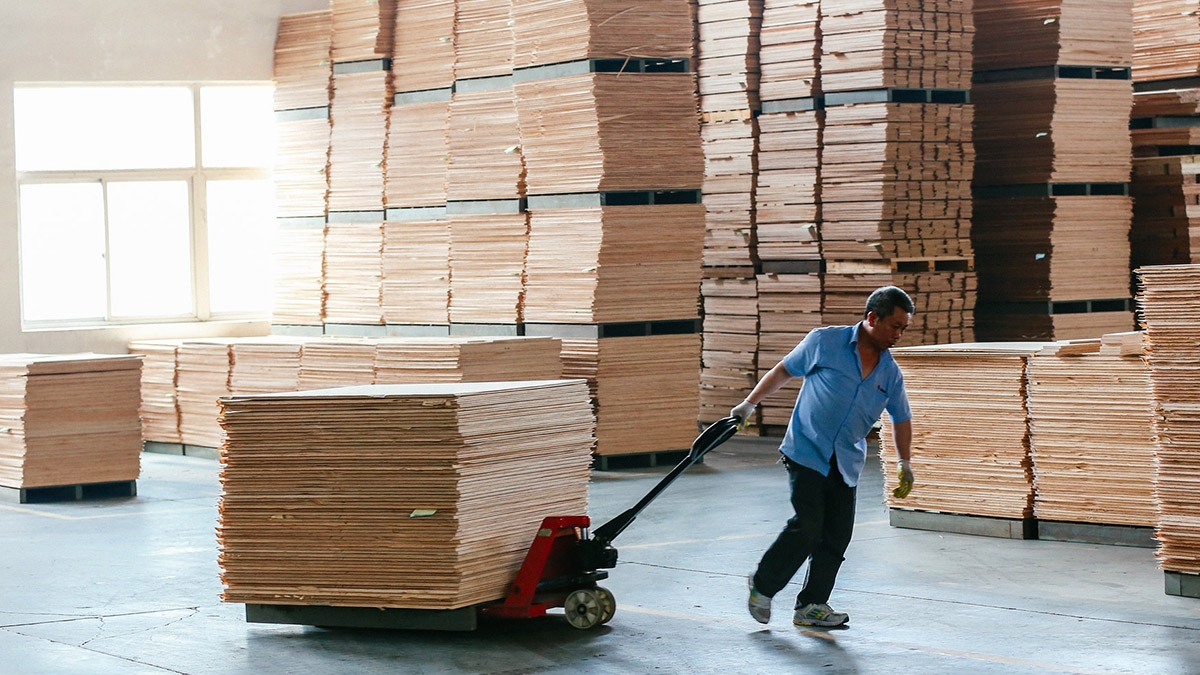 The long history of globalisation from the silk road to digitalisation has seen many disruptions to the world’s economy from political and socio-economic events, but nothing compares with the COVID-19 pandemic. Nevertheless while it had tremendous negative impacts across the world economy, demand for traded goods recovered quite strongly in 2021. But now the Ukraine war has shown that supply chain resilience issues remain with us.

As the pandemic broke out in early 2020, the immediate effect was the significant reduction of demand in world trade and other economic sectors. With many countries imposing lockdowns and social restrictions, industrial output and trade in the first half of 2020 were reduced to levels similar to that of the Global Financial Crisis. Indeed global trade fell by 8.9 per cent in 2020, the steepest drop since the 2008 crisis.

Services trade declined more significantly as industries such as travel and tourism were more affected by pandemic control measures. Trade in services fell by more than 20 per cent, almost four times the decline in goods trade. The negative impact was experienced in all service sectors, including transport. In the maritime transport sector which handles more than 80 per cent of global merchandise trade by volume and more than 70 per cent by value, the pandemic caused a significant drop of 17 per cent in global ship calls and 20 per cent in port calls in the second quarter of 2020 compared with the year before.

Together with the increased rate of vaccination and easing of lockdowns and social restrictions in many countries, world trade in 2021 bounded back strongly. According to UNCTAD’s Global Trade Update in February world trade in goods remained strong and trade in services finally returned to its pre-COVID-19 levels, with the value of global trade reaching a record level of US$28.5 trillion in 2021, which is a 25 per cent increase compared to 2020 and 13 per cent higher compared to 2019. More specifically, in the fourth quarter of 2021, world exports of intermediate goods increased by 21 per cent year-on-year compared with 2020. UNCTAD’s Update also indicated that, in the fourth quarter of 2021, all major trading economies saw imports and exports rise well above pre-pandemic levels in 2019. However, the war in Ukraine, which broke out in February 2022, has put a lot of strain on the global economy, leading to rising fuel and food prices, and making world economic growth slow down, from 6.1 per cent in 2021 to 3.6 per cent in 2022 and 2023.

Back to the future in Ukraine

Despite this overall recovery in trade, the war in Ukraine has worsened the pre-existing supply chain crises that directly contribute to the rise of fuel and food prices. This has pushed global supply chains into a deeper crisis, perhaps even unprecedented in history. Russia and Ukraine are the two main suppliers of key commodities, such as wheat, rapeseed oil, metals, oil and gas, to many countries around the world.

According to the Food and Agriculture Organisation, Ukraine was the world’s sixth largest wheat exporter in 2021, accounting for 10 per cent of the global market. During the conflict, most Ukrainian ports in the Black Sea have been blocked which prevents exports from the country, creating a chokepoint in the global wheat supply chain with supply shortage and thus increased food prices.

Meanwhile, oil exports from Russia have also been paused. The war has highlighted the important role of Russia in the world oil supply chain and how shaky it can be. Russia is the world’s largest exporter of oil to global markets and the second largest crude oil exporter behind Saudi Arabia, and also the world’s third largest oil producer behind the United States and Saudi Arabia.

The continuous increase in sanctions against Russia by Western countries, topped up by the EU-wide ban of 90 per cent of all Russian oil imports by 2023  even although nearly a quarter of oil imports to the EU are from Russia, has caused a dizzying increase in the world fuel price. This has directly pushed the cost of international transport to a higher level from an already established high level and, again, contributed to the soaring price of commodities.

However the war is just the tipping point of the current supply chain crisis, triggered by the pandemic. Many countries are experiencing a situation where the pandemic has disrupted many of the components on the supply side of supply chains while seeing an unprecedented increase on the demand side. This leads to the situation where supply is under pressure to catch-up with the demand.

The maritime industry has always played a crucial role as the enabler and facilitator of prosperity as more than 80 per cent of global trade volume is moved by sea, thus contributing significantly to economic growth in many countries and regions in the world. Container shipping is the lifeblood of the world economy as the majority of finished goods, including household necessities, are transported in containers.

There are several reasons for this significant decline in reliability. Many ships need to wait at congested ports, there are not enough ships on route due to the reduction in services when demand was low in 2020, and there are not enough sailors due to disruptions in crew changes during the COVID restrictions.

Port congestion, especially at the world’s major container ports, contributes significantly to shipping delays and supply chain disruptions overall. Across 2021, the congestion has been continuing in many key container ports in the US (e.g. Los Angeles), Europe (e.g. Rotterdam) and Asia especially in China (e.g. Shanghai, Ningbo, etc.). In October 2021, Los Angeles was the world’s worst as ships had to wait on average 7-12 days for berthing. Overall, port congestion in 2021 took out 11 per cent of global containership capacity while volumes grew at seven per cent, contributing to shipping delays and, eventually, supply chain disruptions and economic losses.

The situation has not been getting better moving into 2022. Specifically, China has 7 out of 10 of the world’s top container ports, contributing significantly to the global container port flow. The congestion level at major ports in China such as Shanghai, Ningbo-Zhoushan, Shenzhen and Hong Kong has increased between 30-40 per cent since March, as China reinstated lockdowns in line with its zero-COVID policy, thus affecting the world economy negatively.

Last year, a terminal in Ningbo-Zhoushan – the world’s third-busiest port – was shut down because of infection cases in the terminal. When this happens, port capacity is reduced, leading to decreased handling capacity and productivity, and thus it takes a longer time to despatch ships berthing and receive other waiting ships. Ships may divert to other surrounding ports, but this puts more pressure as well on those ports and increases the probability of having port congestion. Meanwhile, pandemic restrictions also mean fewer trucks can reach the ports, and thus fewer containers can be despatched from the ports, adding to the problem.

A container load of trouble

An associated issue with port congestion is the global shortage of the containers, which carry the majority of consumer goods, whitegoods, furniture, electronics, and even vaccines. Empty containers are the “tools” that shipping lines use to provide their shipping services. They cannot afford to have too few as that means “stockout” and customers will not be happy when there are not enough containers for their cargoes. At the same time, shipping lines cannot maintain too many empty containers at a place where there is not enough cargo, since that means they will incur capital and/or container hire costs.

Due to the current imbalance of containerised import/export products, there will be more empty containers in some locations than others. So shipping lines will need to reposition some between locations. However, they will do so in an optimal way to reduce the total empty repositioning costs in the whole operations network, since carrying empty containers does not generate revenue for them.

It is worth noting that a shortage of empty containers does happen from time to time. However, the current shortage is quite severe due for several reasons, apart from the increase in cargo demand, especially during lockdowns. Some shipping lines have reduced the number of ships in service. They also sometimes resort to skipping a port in a route or the whole voyage to reduce capacity in order to maintain a high freight rate or sometimes just simply due to not having enough space for a port, or a port being congested, or even not having enough crew to operate some vessels (due to the restrictions of crew change in some ports). As a result, empty containers at some ports are not picked up, as in the case of some American ports.

As countries in Asia, specifically China, have been recovering faster than others, more export shipments from Asia have come to other countries where lockdown and restrictions were still in place. Thus, fewer empty containers are sent back to Asia where they are needed. So, there is a backlog of empty containers in empty container depots and ports. This is worsened by the deficit of stevedores at these ports and depots caused by factors such as COVID lockdowns.

When there is congestion at a port, vessels have to wait or divert to other ports, leading to a longer lead time and contributing to the shortage problem. This is because shipping lines will allocate fewer spaces for picking up empty containers from those ports to maintain a high level of revenue thus, again, leading to the backlog. A similar effect is seen when some Asian countries slow down during the Lunar New Year period.

In a globalised world, resilient supply chains are essential to the stability of international trade and economic growth, so a longer term strategy is needed to avoid these imbalances in the future.

Part Two of this report examines ways of preventing supply chain logjams happening in the future.

Presented in partnership with the Global Victoria Trade Alliance Program.