Celebrating the ties that bind 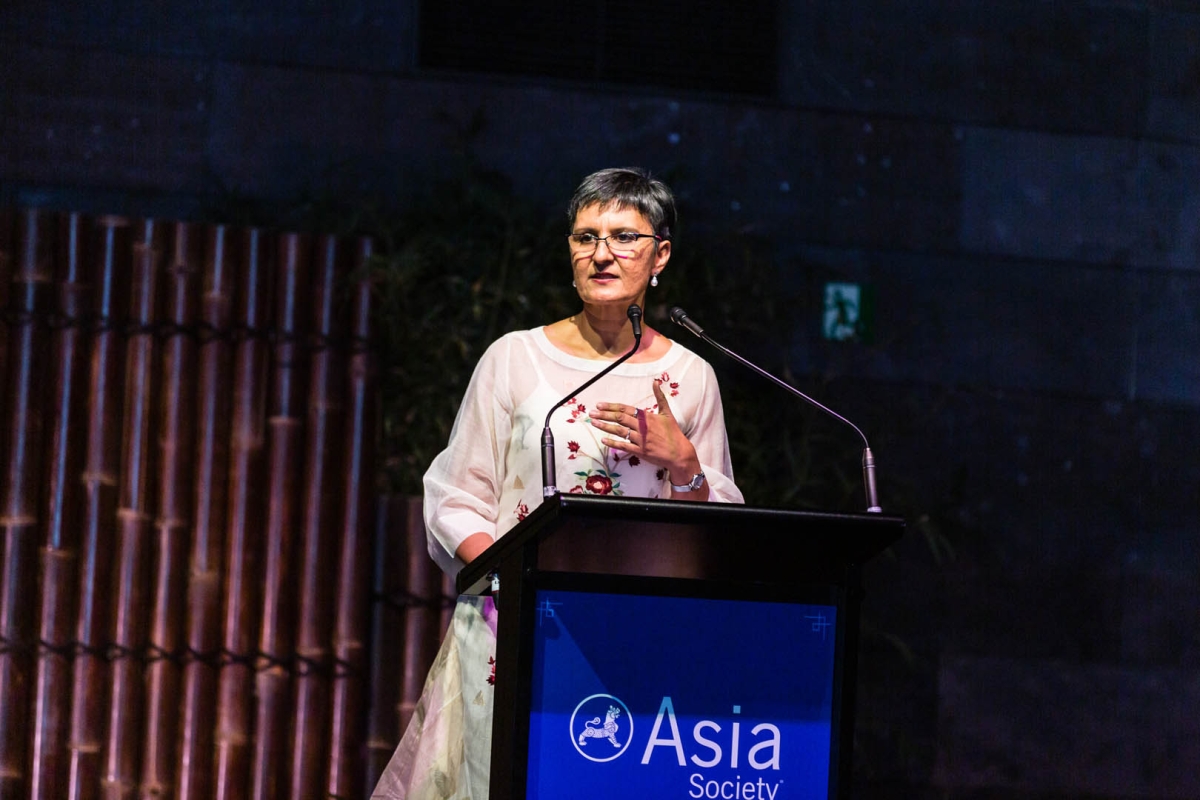 Her Excellency Harinder Sidhu speaks at Hawker Ball, the grand opening of the Asia Society Australia Centre, at the National Gallery of Victoria in Melbourne.

Where you come from shapes how you see the world.

I have the great privilege to serve as Australia’s High Commissioner to India.

It has been the high point in a professional career dedicated to the pursuit of Australia’s national interests.

But it has also been a revelation. I had not expected when I arrived in New Delhi, over three years ago, just how great the impact of my background as an Asian-Australian would be.

I was born in Singapore in 1964 – a year before it became an independent republic. The Singapore I was born into bore little resemblance to the sophisticated powerhouse it is today. Its per capita GDP then stood at $US500, unemployment was at 9%. Poverty, illiteracy and disease were commonplace.

My mother was one of nine daughters born to second-generation Indian Sikhs in a small town in Malaysia; her father a headmaster of an English-medium school.

My father, by contrast, was born in a small rural village in India’s Punjab to poor, uneducated farmers, migrating to Singapore with his family following India’s independence.

I grew up in a home rich with stories about my family’s Asian history. Mum’s experiences of the privations and dangers of living under Japanese occupation. Dad’s tales about the fear and violence surrounding India’s Partition. Their excitement at being part of the nation building project in newly independent Singapore in the 1960s and 70’s, which somehow always involved anecdotes about Lee Kwan Yew.

My parents’ determination to improve their lives and those of their children – through education, hard work and the courage to take risks – is a story that is multiplied millions of times over in Asia. It is these very qualities in its people that has driven its extraordinary postwar development.

When I see the same thing in India today – that same drive, confidence and aspiration among young Indians – I recognise it immediately. It is what underpins my confidence in India’s future success.

I was only ten years old when we arrived in an Australia where Asian faces, cultures and – yes – even Asian food (well, real Asian food at least), were still rare.

Back then, an Australian was inevitably someone who was white and of Anglo-Celtic or European background. You can imagine my family’s surprise when I was accepted into the foreign service – they could not believe that the government would pick someone who didn’t look “Australian” to be a diplomat.

Standing before you all tonight, I find myself in a position that nobody in my family could ever have imagined.

I am only two generations removed from illiterate farmers in India.  I never take my success for granted.

Yet, in my lifetime I have also lived Asia’s growth story.  I am a product of it.  I know what it looks like – what it feels like – to go from poverty to prosperity.  I know it is possible, and I know that it can happen fast.

My experience has made me an optimist.

Professionally, it has made me an unwavering advocate of Australia’s relationships in Asia. I firmly believe that Australia’s prosperity, security and future lie in Asia and, beyond that, the Indo-Pacific. This is no longer a remarkable proposition. It formed the backbone of the analysis in the recent Foreign Policy White Paper.

This was why I was so keen to take up the role in New Delhi.

The chance to shape a relationship of this size was too good to walk past, given what India offers us in terms of strategic alignment and economic opportunity. I see no reason why Australia and India cannot be among the strongest friends of any two countries in Asia. And I’ve focused my efforts over the course of my posting in building toward this goal.

In the process, I’ve been surprised at what a tremendous asset my Indian origins have been.

It has made a powerful difference to my ability to see the place from the inside. I have been invited into spaces where no other foreigners go, simply because I’m not immediately seen as a ‘foreigner’. It has helped me better understand and interpret how India works – in which I’m also helped along by my language skills and a lifelong addiction to Bollywood movies.

My Indian ancestry has helped me be more effective in building networks, making judgments and negotiating in Australia’s interests. Importantly, it has supported our efforts to shape public perceptions of Australia as a multicultural and meritocratic society.

I am fortunate to work in the Department of Foreign Affairs and Trade where we recognise the value of culturally diverse Australians to our international effort.  A number of our Ambassadors are now from Asian backgrounds. Many of them also report similar positive experiences to mine.

Things have changed since I arrived in Australia as a child. In the words of George Megalogenis, Australia is becoming increasingly ‘Eurasian’. According to the 2016 Census, one in ten Australians are born in Asia – and that does not include all those born in Australia with Asian ancestry.

Yet in 2018 the Australian Human Rights Commission, together with the Asia Society and others, found that Australians of non-European background occupied less than 5% of leadership positions in government, politics, business and academia.

It is clear that we are not yet harnessing the full potential of Asian-Australians.

I accept there are many complex issues behind why this is so.  here are also important questions around how we should best go about engaging with our diaspora populations.

But without in any way diminishing these issues, I want to conclude by sharing with you the question that I am now pondering.

In navigating the many challenges we face today in the Indo-Pacific, my view is that our Asian-Australian population is a valuable national asset. The question is, what more can we do to embrace them?

If we were to take my experience in India and multiply it many times over in different sectors and across the region – in business, government, sport, politics, the media and culture – I ask myself what might this mean for Australia’s future, our influence and our place in the world?

What might it mean for how countries in the region see us?

What might this mean for how we see ourselves?

It could be transformative.

And that would be something to see.

Her Excellency Harinder Sidhu is the Australian High Commissioner to India.

This speech was delivered to guests at Hawker Ball, the Grand Opening of the Asia Society Australia Centre at the National Gallery of Victoria, Melbourne on 3 October 2019.