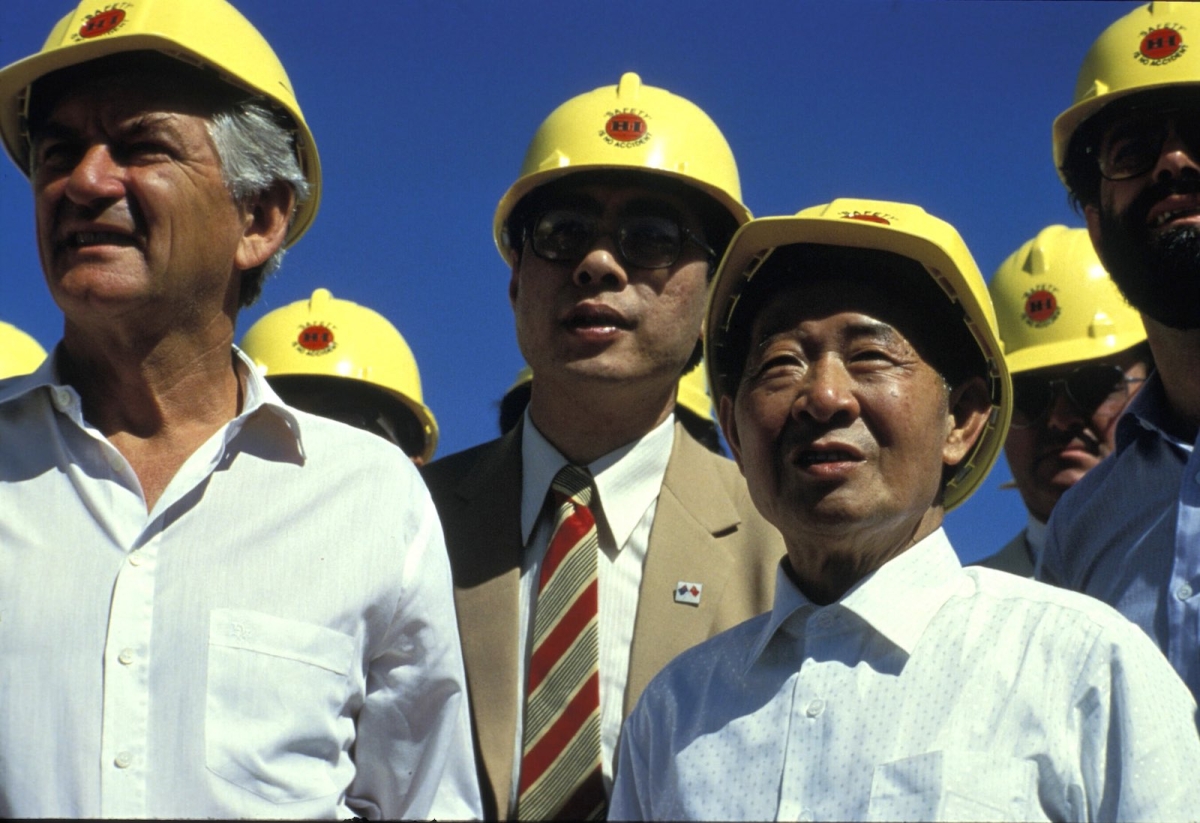 He believed strongly Australia could pursue closer engagement with near neighbours yet remain a close partner of the US.

Bob Hawke’s approach to Asia when prime minister is oft overshadowed by the economic and social policy reforms of his government and the Keating years that followed. This likely reflects our economically focussed political dialogue and the lack of rhetorical architecture surrounding his foreign policy.

Typically, Hawke worked from instinct rather than well-rehearsed grand design, though he put much store in being well-briefed. Many of his international and trade achievements originated in informed gut feel, a bias towards the economic, and his capacity to build strong personal relationships with international counterparts.

When most effective, Hawke relied on a combination of zestful personal rapport, negotiation skills, and comfort with delegating diplomacy to talented colleagues. Principle, where it was an influence, emerged from his deep personal abhorrence of racism and blindness to colour more often than not; later an increasing commitment to environmental heritage. 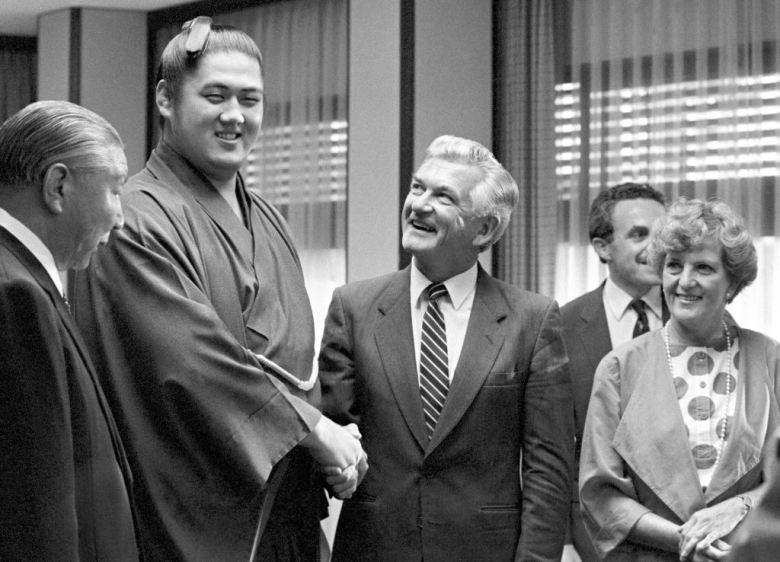 Hawke inherited a foreign affairs and defence platform from Opposition he had little hand in. It eschewed playing a subordinate role in the US alliance. His personal bias was to be less chauvinistic, recognising assertive self-reliance would likely be unwelcome in Washington. The Whitlam Government’s history with the Nixon administration still resonated in 1983, the year President Reagan labelled the Soviet Union an “evil empire”.

Hawke came to believe strongly Australia could balance a more nuanced international outlook and pursue closer engagement with near neighbours yet remain a close partner of the US. He saw this as a means to achieve pragmatic bi-lateral objectives with multiple partners. He worked hard, for example, to position Australia as a trusted conduit China’s leaders could use to re-open formally closed relationships with countries in our region and North Asia, such as Indonesia, Singapore and South Korea.

Differences between Hawke and his party, particularly the Left and the ALP’s intellectual fellow-travellers, made for shaky moments early with the ‘MX Missile” crisis and fraught debates about nuclear proliferation. Moreover, they entrenched an ambivalent relationship with Indonesia. 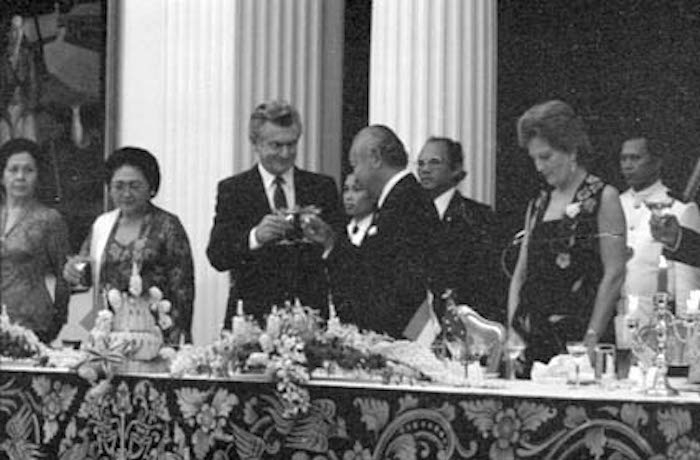 Hawke made sure to visit Indonesia in his first year as PM, but relations with the Suharto regime were often unsettled. In 1986 his government had to enlist the US Ambassador to Jakarta, Paul Wolfowitz, to seek removal of a ban on Australian journalists entering Indonesia. Neighbourly dialogue improved eventually, reflected in the closure of the Timor Gap negotiations, but complications lingered. The Indonesia relationship never loomed as large as it did for Paul Keating. There is no mention of Suharto in Hawke’s memoirs.

Despite this, Hawke expanded Australia’s Asian outlook overall, keeping pace with a world that changed markedly during his time in office. The Soviet Union collapsed, China emerged from great power hibernation, and Australia built a more multi-lateral middle power strategy. The centrality of the US alliance remained, but did so alongside greater “enmeshment”, as Hawke called it, with international institutions and other nations, particularly Asian states.

Keeping former foes close, Hawke worked closely with Bill Hayden and John Dawkins to carve out credibility for Australia as a middle-power that could work within multilateral frameworks, sometimes be instrumental in building them, often to pragmatic effect in trade development. Both talented ministers, Hawke empowered them just as much as those he was closer to factionally, such as Gareth Evans and Kim Beazley. 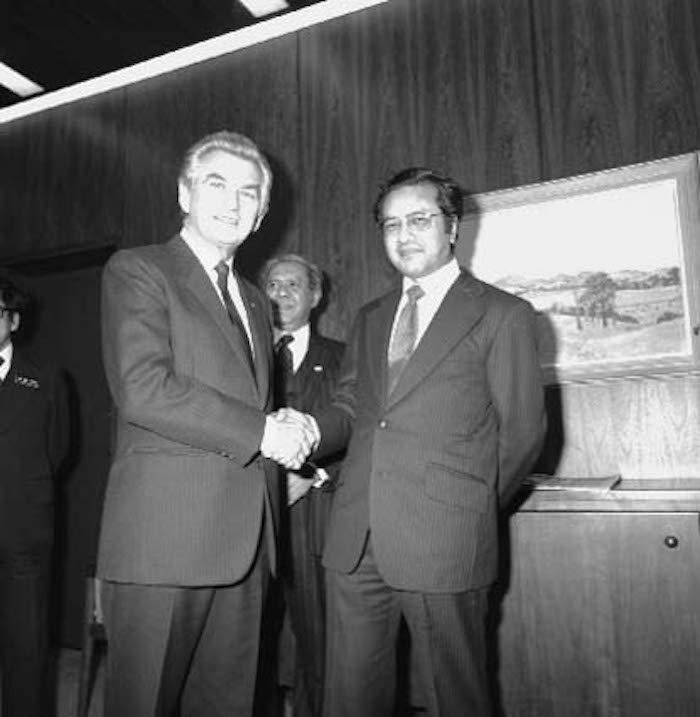 Dawkins was backed to convene the Cairns Group, and it was under Hawke that APEC developed momentum in its first guise as a forum for trade ministers and commercial liberalisation. Hayden was urged to begin work on the Cambodian peace process. Later, a Hayden acolyte, Michael Costello, was given immense freedom as envoy to finish that work - with some connivance from Hawke’s personal foreign affairs adviser, John Bowan.

Informed by advisers such as Ross Garnaut, Hawke believed Australia stood to reap considerable benefits by taking an integrated approach to the unwinding of the bi-polar world and promoting international economic liberalisation. None of his successors have deviated markedly from the paths he took.

Such motivations were reflected in Hawke’s approach to China, particularly, and North Asia, more generally. Some argue Hawke was less comfortable with Japan than with China but is not borne out by his closeness to Yasu Nakasone. He also worked hard on ties with Korea. 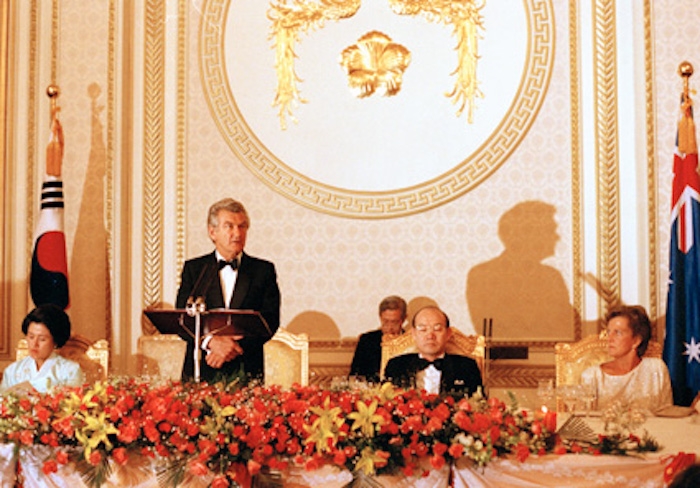 Capitalising on a visit to Australia by Zhao Zihyang in April 1983, initiated by Malcolm Fraser, Hawke worked hard to build personal bonds with three Chinese leaders and foster bilateral economic relationships with China. Zhao’s was the first of several leadership visits by both sides until the events of Tiananmen Square. Hawke visited China in 1984 and the Sino-Australian Iron Ore Joint Venture was launched the same year, eventually resulting in the Mount Channar mine.

Despite the strains Tiananmen triggered, Australia restored the momentum of growing enmeshment with China in the aftermath. It is notable that President Bush Senior cited Australian and Japanese responses to stare down US Congressional calls for a total trade ban with China. Ironically, there is a plausible argument that Hawke’s decision to grant visa extensions to Chinese students after Tiananmen improved perceptions of Australia’s multiculturalism and its education sector across Asia, possibly adding breadth to our links with China.

Bob Hawke’s efforts to enmesh with Asia only affirm his immense capacity for relationship building and negotiation, and his instincts have largely stood the test of time. Some fora he used, such as CHOGM, may have lost their utility and some efforts to forge closer bi-lateral ties through personal bonds, such as wooing Indian leaders, were not consistently successful, but the overall ledger is positive.

This piece was originally published in The Lowy Institute's The Interpreter.

David Epstein is a non executive director of Asia Society Australia. He is Principal of Vigot & Co, Chair of Communications Compliance Ltd, and an adjunct professor at Deakin Business School. He has extensive experience as a corporate executive and in Australian Federal Government, having served as Chief of Staff to Prime Minister Kevin Rudd and Opposition Leader Kim Beazley, a senior adviser to John Dawkins, and Director of Ministerial Media under Bob Hawke and Paul Keating.