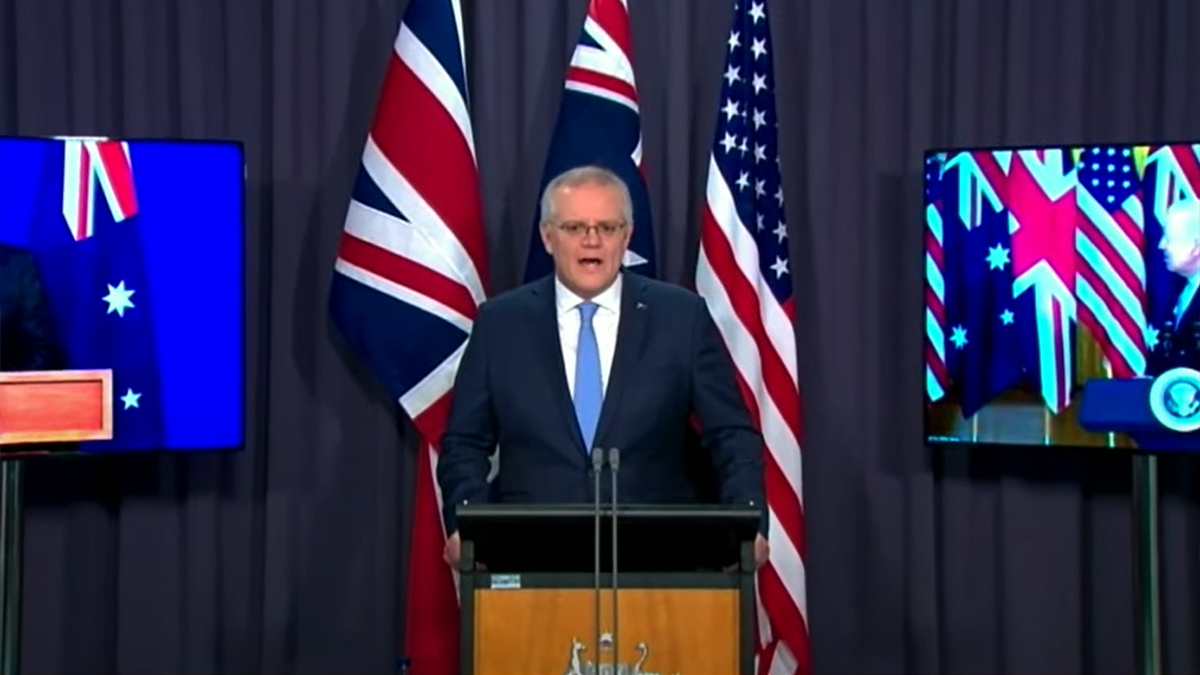 The dramatic announcement of the AUKUS defence partnership is a watershed moment in Australia’s long adjustment to an Indo-Pacific region being transformed by China’s power and assertiveness.

It is difficult to overstate its significance or its potential future consequences – for the Australian defence force, for the nation’s industrial base, for our Alliance with the United States, and for our position in our region.

For the Morrison government, the arrangement serves multiple objectives, offering a solution to the troubled contract for conventionally-powered submarines with France’s Naval Group, a new partnership that binds Australia and the United States even closer together and brings the United Kingdom into the Indo-Pacific, and enhanced access to defence technologies.

The government has been flagging for some time now its concern at what it sees as a sharply deteriorating security environment in the Indo-Pacific, marked by China’s military build-up and willingness to use coercive power.

The government wants a more offensively capable Australian Defence Force with a stronger capacity for deterrence. Almost lost in the noise of the submarine decision were announcements to procure new long-range strike missiles for the navy and air force.

Notable too was the government’s clear positioning of the submarine announcement as a “first initiative” of AUKUS, with the Defence Department looking to other capabilities that, in the words of Defence Secretary Greg Moriarty, will continue to give the ADF a “potent capability advantage in the decades ahead”.

It would be a mistake, though, to think this partnership is simply about the United States and the United Kingdom helping Australia out of the hole it had dug for itself with the Attack-class submarine. The new partnership reflects strongly converging interests.

Giving Australia access to nuclear propulsion technology is an enormous step for the United States, other than decades-old cooperation with the United Kingdom, a “one off”, as US officials have made clear.

But the decision is consistent with the Biden Administration’s heavy emphasis on investing in partnerships to help manage China’s challenge in the Indo-Pacific. For the Biden team, the deal is about sustaining “the fabric of engagement and deterrence” in the region. It comes with expectations, notwithstanding Administration reassurances that there is no direct quid pro quo. Among these are, in the words of one US official, the hope that Australia will “play at a much higher level and augment American capabilities”.

In reality, given the exceptionally long-lead times needed to build submarines, this test is many years away. The submarine deal is laden with uncertainties and unknowns – cost, risks, timelines. The state of US-China relations at the point when the first submarine sets sail can’t be known, nor the willingness of future US Presidents to sustain competition with Beijing.

But even the long process of building the submarines will enmesh Australia ever deeper with the US and UK militaries and defence industries, and over time the prospect of Australian nuclear-powered submarines operating deep into much more contested northwest Pacific waters arises.

For the United Kingdom, the new partnership appeals because it reflects a post-Brexit aspiration to be seen anew as major power with global interests, including closer engagement with the Indo-Pacific.

Would Australia have embraced AUKUS so enthusiastically without the catastrophic collapse of trust in China’s future intentions inside the Morrison government following more than a year of economic coercion and wolf warrior diplomacy?

We will never know, but the partnership dramatically underlines the government’s view that Australia must invest even more in its own defence capability (the Prime Minister has already flagged further increases in the defence budget). It also likely represents fading hope inside government that the democratic world can find any time soon a new modus vivendi with Xi’s China.

China knows it will be years (and years) before new submarines enter service, but AUKUS inevitably will reinforce an already strongly held belief in Beijing that the United States seeks to contain China and thwart its rise, and that Australia is slavishly trailing behind. The new partnership will therefore add to the already large pile of decisions China believes Australia must “correct”. Expect the bilateral relationship to keep bumping along the bottom.

There are no signs Xi intends to reflect on the role of China’s own behaviour in feeding insecurity in the region, or to adjust course. So, for Australia, a key challenge remains to ensure there are some boundaries around competition, so that competition does not flare into a disastrous military conflict. We will need enough independence within the Alliance, flexibility in our own policy settings and strong regional diplomacy to ensure this. The risk for all countries of the region is ever-ratcheting up military competition – a classic security dilemma from which no exit is found.

It will take time for other regional implications to be clear. India, Japan and (even if only quietly) South Korea will welcome the move.

Southeast Asian reactions will be mixed. Some will be more supportive privately than publicly.  But the region is already anxious about rising major power competition and the risk of conflict. Regardless of the balance of opinion in Southeast Asia about the new submarines, it would be disastrous if a view took hold in the region that Australia sees the security of the Indo-Pacific as primarily a matter for larger powers in the Anglosphere.

In coming days and weeks, the government must find opportunities to recognise the role regional countries play in collectively managing their own security and that of the region. Our bilateral defence relationships in Southeast Asia are generally in good health but we also need to keep investing in them.

New Zealand’s Prime Minister has been gracious in recognising the decision while making it clear even Australian nuclear-powered submarines won’t be allowed to visit.

Australian Defence officials emphasise their intent to continue to invest in the close and long-standing NZ-Australia defence relationship, but the scale and significance of the announcement highlight New Zealand’s position at the edges of hardening coalition designed to balance China’s power in the Indo-Pacific.