Australia and Asia in 2019 | Asia Society Skip to main content

A note to the incoming government 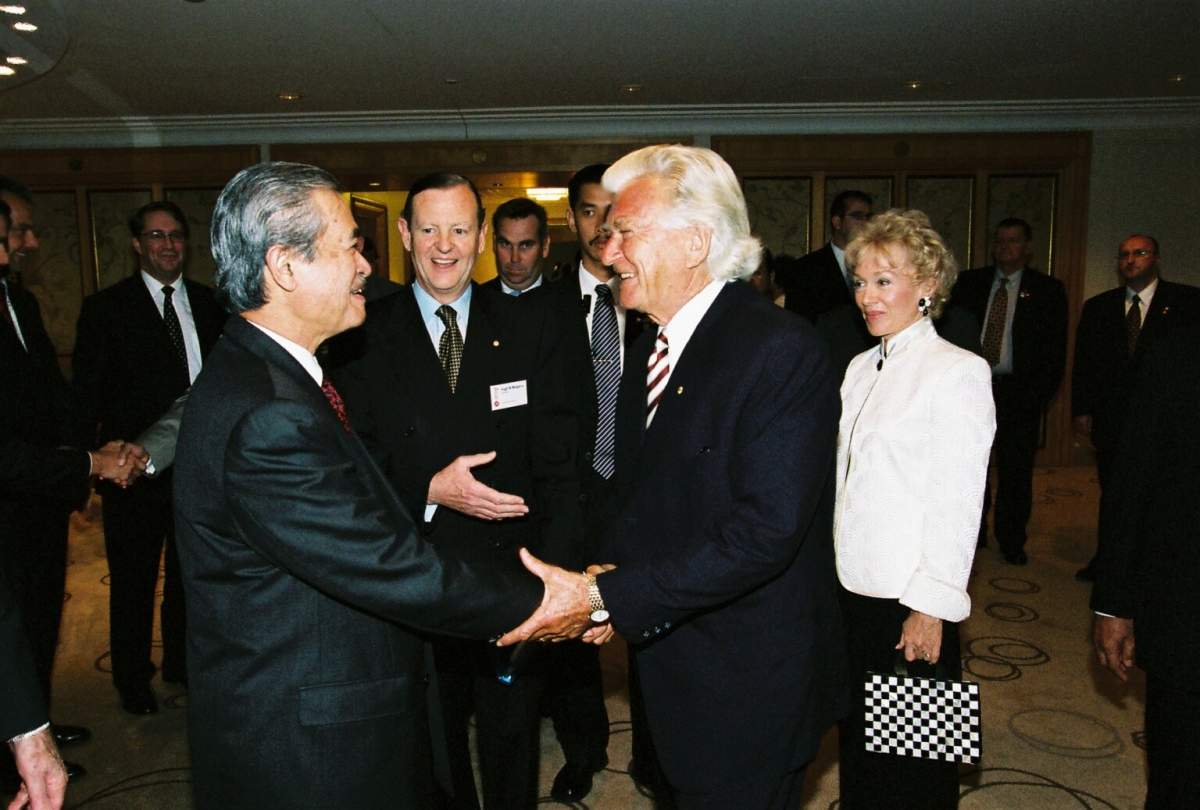 “Relations with the countries of the Asia/ Pacific region must obviously command the highest priority for Australia. I said this immediately after assuming office; others had said it before me. I suggest the difference is that over the last twelve months my Government has succeeded in giving real substance to the character of Australia's involvement with the region”.

As Australia goes to the polls this Saturday and mourns the passing of one of its most loved Prime Ministers, we face an Asia that is both an economic powerhouse driving the global and Australian economy, and an epicenter of the unfolding geopolitical and geoeconomic division between the region’s two major powers, consequences of which will be catastrophic for Australia’s security and prosperity.

Our major security and economic partner – the United States of America has dramatically altered its policy on China (our largest trading partner and the largest source of migrants, students and tourists) towards an open competition and in some cases (such as technology and trade) a confrontation.

China’s economy is slowing as it continues an uncertain transformation of its industrial policy settings towards a value-added, innovation-driven and more consumption-focussed economy.

China has also become more authoritarian and less tolerant of dissent at home and abroad, while also growing more globally active and assertive – including through military, economic, and soft and sharp power projection.

But China’s governance model as an alternative to a multi-party democracy and its vision for the region have not gained (at least so far) strong support and following in the region. Witness this year’s festival of democracy in India and Indonesia (and Australia), and a pushback against  some of the excesses and inadequacies of China’s One Belt One Road Initiative. India, Indonesia, Vietnam, Japan, Australia and Korea have stepped up their diplomacy to avoid being caught in the US-China confrontation, but also to defend and strengthen the weakening of a rules-based order.

Australia itself is changing - demographically, socially and economically, as well as becoming much more integrated and connected with Asia - making it more difficult to untangle domestic and foreign policy considerations.

Despite the uncertainties and challenges, Australia has strong foundations to navigate a more competitive and contested region. Here are some principles that might be helpful to the incoming government to formulate its Asia policy fundamentals.

It is our strong belief that democracy, an open market economy and commitment to global trade, rule of law, freedom of speech, multiculturalism and religious, cultural and political tolerance continue to be the fundamental assets in Australia’s diplomatic, economic, political and soft power arsenal. We should not shy away from projecting and emphasizing these values, especially now when populism and authoritarianism are on the rise, democratic systems and global trading regimes are under stress, and the global power is no longer concentrated in one pole.

Whilst we should recognise and respect the historical, political and cultural pathways that led to the creation of governance models different from ours (and it is not only China that is different), we should also have confidence in our systems and institutions which so far have served Australia well.

Even the recent carousel of changing Prime Ministers has more to do with the shrinking and fracturing support base of the major parties and the proliferation of opinion-driven media platforms than the quality or resilience of our institutions.

Australia’s story (despite its many interpretations and challenges) is our main foreign policy narrative for Asia - a modern, confident, internationally active, multicultural, global trading nation and a successful economy, stretching across two oceans, located in and connected with the world’s new center of gravity.

Australia’s dynamic and open economy that has experienced over two decades of uninterrupted growth is globally recognised and respected. As a global trading nation, how creative and interests-driven we are in our economic diplomacy in the region will be vital for our prosperity. Australia has done extraordinarily well over the last 25 years exporting agricultural products and mineral resources to Asia, feeding the economic growth and consumption demands of Asia’s vast middle-class. The opportunities in Asia for Australia continue to be significant, but – with minor exceptions - continue to be overlooked by most Australian businesses. In fact, as PwC’s ‘Passing Us By’ report (2014) highlighted  - Australian businesses have invested more in New Zealand ($60 billion in 2015) than they have in all ASEAN countries plus China, Japan, India and Korea combined ($59 billion). Just 9% of businesses were operating in Asia and only 12% of Australian companies had experience of doing business in Asia at all. This needs to change, if Australia wants to continue being an economic success story and meeting the demand of its population for the highest quality of life we have become accustomed to. While the Government has done a lot to eliminate tariffs in our major trading partnerships, facilitate trade, provide information and support to businesses to enter and succeed in Asia, it is now time for our business leadership to step up, identify barriers and solutions, re-assess risks, celebrate champions and start playing an active role in Asia’s economic story, rather than being a by-standing supplier to it.

Foreign investment will continue to be one of the bloodlines of the Australian economy, and we should fully utilise the opportunities arising from this new, globally mobile Asian capital, including from China. It will be important to ensure Australia has the region’s most attractive and competitive foreign investment regime.

Our geography and connectivity with Asia coupled with our distinct, ancient indigenous heritage and more recent European migration history and character has been at the centre of the national debate about Australia’s identity for decades. But as we noted in our inaugural Disruptive Asia publication in 2017 -   “The proximity and engagement debates have been largely resolved, in part by the forces beyond Australia’s control, as economic and strategic power shifts to Asia”. Add to it Asia’s dominant role in our trade and increasing investment, demographic changes and the pace of mobility of students, tourists, professionals between Australia and Asia, and it is clear that Australia in 2019 is an Asia-Pacific nation with a distinct character which combines ancient influences of its cultural geography (our Indigenous and South Pacific heritage) and our modern history of European and Asian migration. The narrative that recognises our integration and connectivity with Asia should be a founding principle of our policy settings, and for our political leaders – a set of unchanging ‘talking points’ to tell Australia’s story in Asia, at home and beyond.

Australia is an international education powerhouse. International students - predominantly from our region - are the largest human interface of Australia’s engagement with Asia, and are the most effective multipliers of our soft power projection to Asia and the rest of the world. We need to acknowledge their place in the context of our wider engagement with Asia, their transformative impact on our country and how we describe their role, impact and contribution to Australia. International students’ contribution to our society goes way beyond economic, migration and public diplomacy outcomes, but encompasses all facets of our community and society.

Whole-of-Australia project: Education institutions are the lead custodians of international education, but its value and impact is national, which requires the involvement of governments, business, and Australian communities.

Soft Power value: International students are the best, most effective and most numerous amplifiers of our image abroad as a thinking country and knowledge economy (not just a place of natural attractions and lifestyle).

Australia’s multiethnic, multicultural society is one of its most powerful soft power assets. Australia is arguably one of the most multicultural societies in Asia and globally. By projecting our successes in this area, we highlight to our neighbours the value of tolerance and diversity for our economy and society, and debunk myths of inherent racial or religious incompatibility between certain groups and communities, which are still alive in some countries in our region.

To do it effectively, Australia needs to address the issues of under-representation of Australians of non-Anglo-Celtic or European background in the leadership of our political, business, education and government institutions – the issues we highlighted in the report "Leading for Change: A Blueprint for Cultural Diversity and Inclusive Leadership Revisited ".

Once the issue of under-representation is addressed, Australian multiculturalism as a story of diversity, tolerance, open-mindedness and freedom will not need to be told by the Government explicitly, but will be clearly reflected in our political, economic, cultural and educational exchanges with Asia, and through Australian leaders themselves.

Australian-Asian communities also have the cultural intelligence and networks that will benefit Australia’s economic, cultural and political engagement with the region.

As other countries seek to influence Australia’s public and elite opinion, including through their diasporic communities in Australia, culturally-diverse leaders of our institutions, who are representative of the make-up of our society are our best counter-weapon to any undue or coercive influence within Australia.

Our collective capacity to understand Asia’s politics, economies and societies is becoming a necessity in a more economically competitive and strategically contested region. The depth and breadth of Australia’s expertise on Asia is a major asset. An Australia that is well informed and culturally sensitive will do well in Asia. But we need to tool up. We have to reverse a terminal decline in teaching of Asian languages and studies in our schools and universities, even if it requires some difficult top-down decisions, not initially corresponding with students and parents’ demand. The region we live is steeped in ancient, established civilisations with distinct national cultures. Understanding our neighbours’ languages and societies, at least at a basic level, will undoubtedly boost our capabilities and competitiveness as a knowledge nation, and help us navigate a much less predictable region. Yet we continue to chronically underinvest in our capability to understand Asia better, at school, tertiary, professional and leadership levels. It may be the time to consider establishing a national Asia Centre - a prominent public space and a hub in one of Australia’s large population and economic centres celebrating Australia’s geographic, cultural and economic connectivity with Asia. It will also serve as a regional ‘think and do tank’ (the first in Australia dedicated exclusively to the region) - a business, policy and education institution examining Asian politics, economies and societies and Australia’s place in Asia, hosting scholars and leaders from the region working alongside Australia’s best minds to find the solutions to our shared challenges.

Australia faces perhaps one of its most impactful historical disruptions – a decisive and irreversible shift of economic power to the region it inhabits, a rise of a major power that is likely to dominate this region and whose values and vision for it are markedly different from ours, and a profound demographic change at home. The incoming government will be well served to start charting a new path to navigate this disruption and crafting a story that explains it to our community. And do it with the conviction, intellectual firepower and passion of Bob Hawke.