An Alignment with Limits: NATO and its Partners in the Indo-Pacific | Asia Society Skip to main content 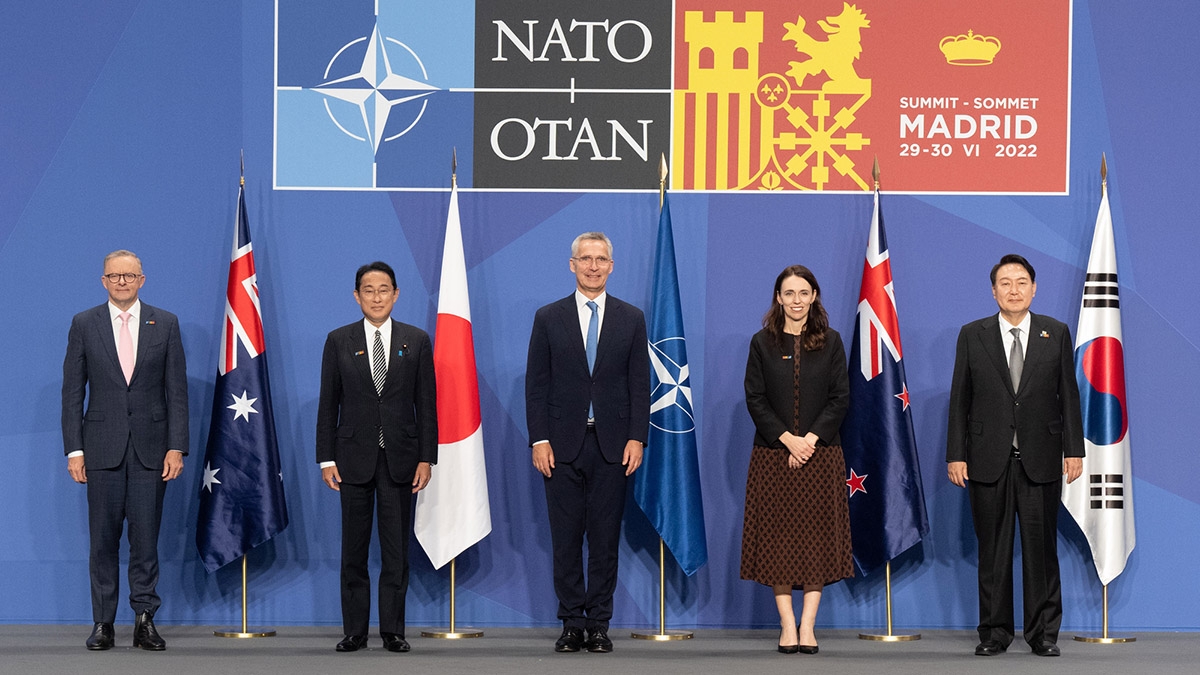 Last week’s North Atlantic Treaty Organization Summit was a landmark event in trans-Atlantic relations, positioning Russia as the “most significant and direct threat” to European security and agreeing to NATO membership for Sweden and Finland, a previously almost unthinkable outcome.

But the Summit was also significant for the Indo-Pacific: the Alliance officially designated China as a “systemic challenge” and, for the first time, all four NATO partners from the Indo-Pacific attended: Australia, Japan, New Zealand, and the Republic of Korea.

NATO and its Indo-Pacific partners agree that we live in “a more dangerous and unpredictable world”, in the words of NATO Secretary General Jens Stoltenberg. Most have already announced increases to their defence budgets. Particularly noteworthy are Japan, which plans to double its defence budget to 2 per cent of GDP, which would make it the world’s third largest; and Germany, which has dedicated a special fund of EUR 100 billion (AUD 151.6 billion) to its armed forces. A significant sum considering its annual defence budget is just half that.

The fact that these two aggressor-cum-pacifist states are rearming shows just how different the world today is, even compared to a decade ago.

In 2010, NATO’s Strategic Concept, which lays out how the Alliance collectively assesses security challenges, China didn’t warrant even a passing reference. Cooperation with Russia was considered of “strategic importance”. It wasn’t until 2019 that NATO first mentioned China. Then, the Alliance spoke of the “opportunities and challenges” presented by China’s growing influence. Just two years later, the word “opportunities” had been dropped.

It might be tempting to see this change as solely influenced by the United States, which has identified China as “the most serious long-term challenge to the international order”. In reality, China only has itself to blame for “losing” Europe. Russia’s invasion of Ukraine immediately following China’s declaration of a “no limits” friendship with Russia deeply worries Europe, as does China’s continued diplomatic support of Russia.

But a cooling of relations has been evident for some time. The EU has long been concerned about China’s abysmal human rights record, is dissatisfied with Hong Kong’s “authoritarian turn”, has rallied against what it describes as China’s “discriminatory trade practices”, and has been angered over counter-sanctions applied to some its Parliamentarians, which froze the EU-China Comprehensive Agreement on Investment.

NATO members and their Indo-Pacific partners thus increasingly agree on where threats to the global order come from. In this year’s Strategic Concept, NATO warns that China’s “stated ambitions and coercive policies challenge [NATO’s] interests, security and values”.

Still, while the strategic convergence across many in the Euro-Atlantic and its Indo-Pacific partners is here to stay, we should not confuse it with complete overlap.

Japan and Germany are both increasing their defence budgets, but they do so with different adversaries in mind. While NATO is keeping an eye on China, Stoltenberg has made clear the Alliance does not see it as an adversary for the defence pact. China is mainly seen through a Russia lens, with NATO taking aim at their “deepening strategic partnership”.

The reverse is also true. While they are rallying behind Ukraine to defend international norms, NATO’s Indo-Pacific partners are sharply focused on the possible precedent Russia’s brutal invasion might set in Asia (though New Zealand resists this characterisation). Japan has been a strong supporter of Ukraine, warning that “Ukraine today may be East Asia tomorrow”. Australia has proudly proclaimed to be Ukraine’s largest non-NATO supporter, cautioning China to take lessons from Russia’s pariah status.

Beyond NATO, the European Union views China as a “systemic rival” and economic competitor, but the EU’s Indo-Pacific strategy is less about balancing China’s power in the region and more about amplifying EU engagement with, and influence in, Asia.

Nor, despite growing concern about China, is there consensus across EU member states on how best to meet the challenge. While some, like Hungary and Greece, are still seeking closer economic cooperation while keeping the security dimension separate, others, like Sweden and Lithuania, are increasingly looking to limit Chinese presence and influence, seeing the relationship through a security lens.

These differences were on display during the negotiations for the Strategic Concept. The United Kingdom pressed for a more forceful tone on China alongside the United States, while France and Germany, where for some the idea of Wandel Durch Handel (change through trade) remains alive and where China plays an important role in the vital car industry, wanted to tone down language.

In the end, NATO not only included a reference to the China “challenge”, but also noted that it hoped for “constructive engagement” on building transparency. Only time will tell whether this is realistic or will seem just as outdated, if not naïve, as the idea of NATO cooperation with Russia appears today.

For NATO’s Indo-Pacific partners, including Australia, a united Euro-Atlantic and willingness to push back against the China-Russia entente is positive. So too is greater European engagement in Asia. Even so, the task of building a favourable balance of power in the Indo-Pacific, or what Australia’s new Foreign Minister, Penny Wong, calls a “strategic equilibrium”, largely will remain the work of the United States and its close Indo-Pacific partners.