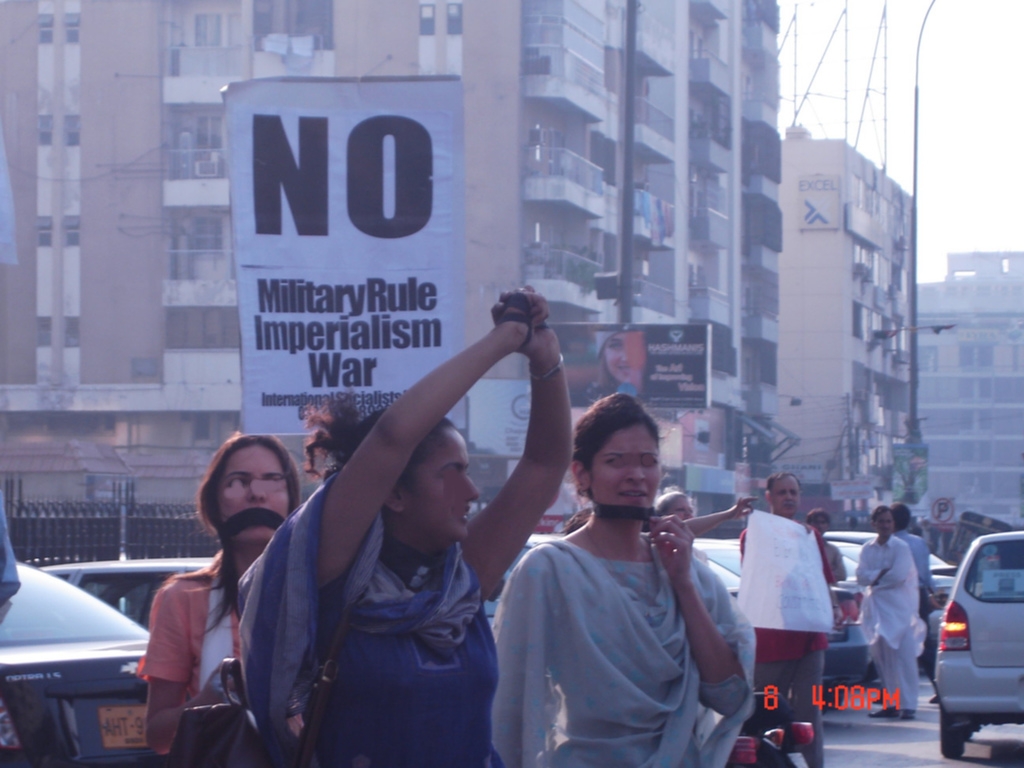 Asma Jahangir is one of Pakistan's leading advocates for human rights. A prominent lawyer, she has worked both in Pakistan and abroad to prevent the exploitation of religious minorities, women, and children. Ms. Jahangir is serving her seventh year on the Human Rights Commission of Pakistan (HRCP). In August 1998, Asma Jahangir was appointed by the United Nations to be the Special Rapporteur on Extrajudicial, Summary or Arbitrary Executions.

The Asia Society spoke with Ms. Jahangir while she was in New York about the military government in Pakistan.

You suggested in your talk yesterday that there is a causal link in the sequence of events leading up from India and Pakistan's nuclear tests, the conflict in Kargil and the coming to power of the present military regime in Pakistan. Could you elaborate on that comment please?

Well, I think that when India detonated its bomb, they in fact invited the army in Pakistan to take over because our army is not confident of civilian rulers. And with the responsibility of the bomb that was then declared, the military, according to its own thinking, was forced to take over power in Pakistan. They can't have a civilian government being that powerful and being in charge of defense, having a civilian administration in charge of nuclear defense.

You also suggested that contrary to the general impression, especially here in the United States, the military government of Pakistan does not necessarily have popular support. You suggested that the media both in Pakistan and abroad has played a part in creating this impression. What evidence would you cite to support the contrary argument, that is, that the coup does not have popular support in Pakistan?

Well, there have been no demonstrations in support of the coup at all, number one. Number two, why did the Army have to ban political rallies if people are so supportive of the military? Number three, all political parties have asked for a return to democracy without fail, even the smaller parties. Number four, you have strikes every day, protests, etc. and there has been a lot of criticism in the press as well now.

Given how many times the military has intervened in politics in Pakistan, isn't it surprising that the Western press has by and large offered little but very tempered criticism? Why do you think that is the case?

Because you know I find that the West is getting very smug about questions of what applies to them and what applies to others. There is a kind of superiority air about them. And they feel that people -- like ourselves - don't really know what democracy is and don't deserve it. And their policies are not people-oriented; they don't understand people, but they may understand governments and that's not enough. I was very disappointed myself, as I said yesterday, that we continuously have visitors from the West coming and saying, "Well, maybe it's good for human rights…" I just looked at them and said, "What are you talking about, good for human rights? A military government good for human rights?" What is human rights, I think they've forgotten. Human rights is not something that is so disconnected from the whole process of democracy, which means self-rule. It's like justifying slavery and saying, well, if your master is good to you then what's the harm in being a slave? It pays you well, it's good to you, they don't beat you up, why don't you be a slave? And saying there's a good slave-driver and a bad slave-driver.

To continue with the theme of journalism and the way that they've covered the coup... Liberal journalists from Pakistan, including some who have visited this country, have argued that the present military regime is the only thing standing between Pakistan and an Islamic revolution? Can you comment on that?

No, I think they are wrong. They are misinformed and these are the same liberals who first thought that the army can come and solve the problems of Pakistan. They have been proved wrong now because the problems are not getting solved. My perception is that it is the Army of Pakistan that patronizes the Islamists ... If they didn't have the patronization of the Army, they wouldn't be that vocal and they wouldn't be that militant. It is not Mr. Zulfiqar Ali Bhutto or Benazir Bhutto that created the lashkars [militant Islamist groups].

That may well be the case but isn't it also true that Zulfiqar Ali Bhutto was responsible for introducing legislation against the Ahmadis [persecuted Muslim sect] in Pakistan?

I think you've answered this to some extent but if you could please elaborate. Why do you think it is that liberals in Pakistan seem to have generally supported this military government? You're one of the few people in prominent positions who have actually come out strongly against the coup right from the outset.

Also, over the years, new liberal elements have come up. But how can you call anyone liberal who accepts an autocratic, military government? They have a liberal veneer, but that is all it is. So I think this has exposed the so-called liberals of Pakistan for what they are, because this bubble had to be punctured at some stage…

You mentioned this briefly yesterday but could you please elaborate on your impressions of the way in which Nawaz Sharif's trial has been conducted in Pakistan?

Well, we had somebody from the Human Rights Commission monitor that trial. He said that the judge's demeanor was very good. And the judge behaved very well, had a very objective manner. However, we felt that some things were certainly of concern, like the fact that it was a special court, it was a special law. We continued to condemn these aspects of the trial until Nawaz Sharif himself said that he was quite satisfied. It really makes us feel rather silly because we gave a statement saying that these are some of the aspects that need to be examined before we give a stamp of approval to the trial, and then the next day, Nawaz Sharif says he was extremely happy with it.

You don't think he could have said that under duress...

No, he said it directly to the press.

Now I just want to turn briefly to the blasphemy law. The military government recently collapsed in its determination to reform the blasphemy law when pressured by the religious right in Pakistan. Given that the general impression is that only an authoritarian government can bring about such reform in Pakistan, what explains the regime's weak-kneed response?

Because I really don't think that it is an authoritarian government that can do this. This is not my belief. In fact, every time there has been an authoritarian government, they have brought in reforms contrary to the aspirations of the people. And the only reform that was brought about by Mr. Ayub Khan on the family law remains controversial even today precisely for the reason that he never went through a parliament.

I mean this government has not come in with the objective of delivering human rights to the people. Why should they risk anything? They thought they were a military government and they would be able to placate and take on the mullah but they find it too tedious, too tiresome to do that. It's not that the military can't do it; they can do it if they wish to but they don't wish to…

We are involved in cases like this - but not in every case can we provide a lawyer, because these cases were in another city and it's not possible for us to do it. But there have been other cases in Punjab where a Christian was framed and convicted two days ago... But yes, we do monitor them. We do give support, we do have a fact-finding in each case, to know ourselves what is happening.

The HRCP has done much to campaign against the persecution of religious minorities in Pakistan. However, it appears that in this regard the plight of the Hindus in Pakistan does not receive as much attention as that of Christians and Ahmadis. Is this true, and if so, why?

Yes, it is true for the simple reason that the Hindus feel that they are very vulnerable. They asked us, in fact, that when we make our report - we have a whole chapter on religious minorities -- we can write about them, but they are not ready yet to have a special campaign around them. You have to ask your target group as well, you can't create trouble for them and then back off. So there is a chapter on it, but other than that, the whole campaign we don't do until the people are ready for it. Even with the Ahmadis we have not done it. There are so many stories but people say no, we don't want it reported.

Well, our role always changes because we have not had a very stable environment and we decided some years ago that we should continue to do the work we do, regardless of the environment outside. We do have something called the Democratic Center within the HRCP and that democratic center should really take on the new challenges that are created by changes in the political system. And there we have taken on a new role as a catalyst of bringing political parties together and talking, which we did and it worked because they were not meeting each other otherwise but under HRCP auspices they could sit down and at least have a brainstorming session there. Plus not just political parties but we address the whole question of judicial independence. Public opinion is key to the survival of democracy, to educate people about what democracy is all about, and so that is continuing now and we'll see where it takes us.